The story of Jewry and Galveston is one that fascinates me. Many people, even those well-versed in American Jewish history, may not know of the early 20th Century attempt to bring immigrants to the United States via this small Texas town, instead of New York.

I had the privilege of researching hundreds of documents, ship logs, and notes from the venture, left to the American Jewish Historical Society by Rabbi Henry Cohen. Cohen was the on-ground support in Galveston. He himself was quite a character.

Born in England, he rode around Galveston on his bicycle wearing long coat tails. On the cuff of his sleeve, he wrote all of his appointments for the day. He became known as that Chief Rabbi of Texas
At the time, Galveston was an agriculture-based community. Farmers from around the region would come to the city on the weekend to sell their goods. However, the Jewish farmers suffered on Saturday mornings. They would not open their stands at the market until after Shabbat services. Cohen ended services an hour early to help accommodate the community’s needs. At the same time, word got out about Cohen’s dynamic sermons. Christian farmers in for the weekend began attending Shabbat services to listen to the Rabbi. Soon enough, the market closed on Saturday mornings, as all of the farmers, Jewish and non-Jewish alike, came to Shabbat services before selling their goods in the afternoon. The term Shabbas goy takes on a new meaning.
It’s stories like this that bring American Jewish history alive.

Way back when, in 1907, a number of American Jewish philanthropists, prompted by the redoubtable Jacob Schiff, sought to ameliorate the lot of would-be immigrants by pointing them in the right direction: away from overcrowded and blighted urban areas and toward the wide-open spaces of the West, whose â€œnature and uncontaminated atmosphere tend to build up constitutions instead of undermining them.â€? Determined to alleviate the congestion characteristic of the Northeastâ€™s â€œgreat ghettosâ€? and to minimize, avant la lettre, the possibility of antisemitism, Schiff and his associates attempted to prevail on those traveling to the New World to enter its precincts via Galveston, Texas, rather than land in New York or Philadelphia. And then, once in that â€œpart of the country in which opportunity still knocks at every manâ€™s door,â€? the new arrivals were encouraged to start afresh by taking a train to and settling in Omaha, Neb., and Kansas City, Mo.; Des Moines, Iowa, and Texarkana, Ark. (MORE) 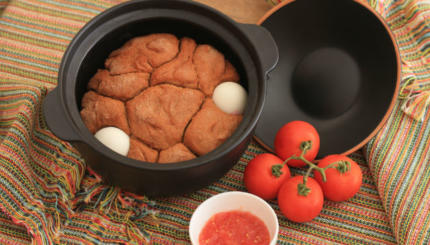 The Jews of Yemen would assemble this buttery, yeast dough and serve it warm and fluffy for a post-services breakfast.