To commemorate the five-year anniversary of Trembling on the Road, director Sandi Dubowski has launched a campaign to celebrate and further the influence of the documentary’s predecessor and inspiration: Trembling Before God.

Dubowski and friends are organizing screenings and discussions around both films, and the campaign has been specifically launched to coincide with the Ten Days of Repentance from Rosh Hashanah to Yom Kippur.

3. What is the Trembling on the Road 5th Anniversary Celebration?

During the 10 days between Rosh Hashanah (The Jewish New Year – September 12th) and Yom Kippur (The Day of Atonement – September 21st), we will launch a creative and innovative international Web 2.0 and face-to-face campaign to organize 250 Trembling on the Road screening and discussion events in homes, workplaces, and houses of worship. Our goal is to reach over 100,000 Jews and non-Jews, GLBT and straight, during this powerful 10-Day period and beyond. We seek to catalyze people to reflect on the questions: Have you created a more open and welcoming home, synagogue, family, and community? – and to take an action step: Where can you make a transformative change?

The Ten Day period between Rosh Hashanah and Yom Kippur is the ideal ritual time for reflection â€” when we recognize and measure our shortcomings and recommit to the freedom to transform ourselves in the world. On Yom Kippur, no Jew is ever turned away. It is the time of greatest inclusiveness and openness. It is also the painful time during Mincha or the afternoon service that the prohibition against homosexuality in Leviticus is read from the Torah. (MORE)

To find out how to host or attend a Trembling party, click here.

To read more about the events surrounding Trembling‘s fifth anniversary, check out this excellent Forward article. 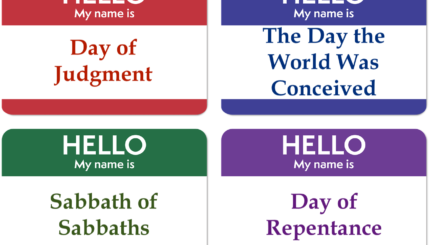 The Jewish High Holidays go by many names.