Every Jewish holiday has its rules, and the foods you should eat. And Purim is no different. We’re expected to listen to its story, during the reading of the Megillah. We are obliged to remember those less fortunate by giving tzedakah, or charity. We are told to enjoy a celebratory feast. And, finally, we are commanded to share our joy by sending festive food packages to at least one other person.

Each of those packages should contain a minimum of two items, one of which is baked. It’s most traditional to find hamantaschen in these little packages, but there is no rule that it must be, which is good news for those eager to try something else.

Cookbook author and baker, Katja Goldman, prepares breads in the shape of a crown and stuffs them with foods both healthy and savory, referencing the crown worn by Queen Esther, the title character and heroine of this story. Katja’s stuffing is a reminder of the foods that tradition tells us Esther allowed herself to eat while living in the palace with her Persian husband, King Ahasuerus. Esther was a Jew, but she kept her religion and true identity from her husband. She kept the laws of kosher eating, kashrut, by eating a vegetarian diet, one rich in seeds and beans.

This savory bread recipe is a cross between a challah and a bialy, stuffed with onion and poppy seeds and topped with more beautiful poppy seeds. So if poppy seed hamantaschen aren’t quite your thing, this stuffed challah might be a delicious counterpoint.

The following recipe is excerpted with permission from The Community Table, Recipes & Stories from the Jewish Community Center in Manhattan & Beyond by Katja Goldman, Judy Bernstein Bunzl and Lisa Rotmil. 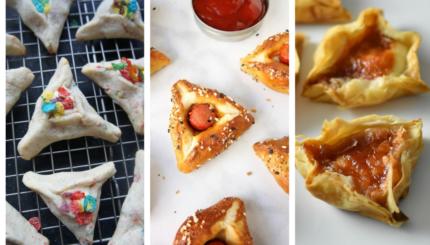 Whether you like your cookies classic, or savory, or even rainbow-dyed, there's a recipe out there for you. 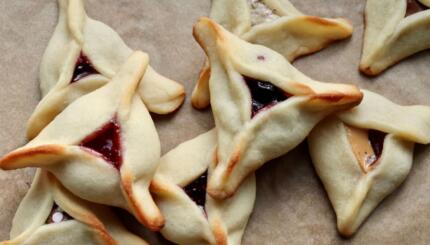 Hamantaschen weren’t always my favorite cookie to enjoy. The ones I grew up with were dry, would sort of crumble ...