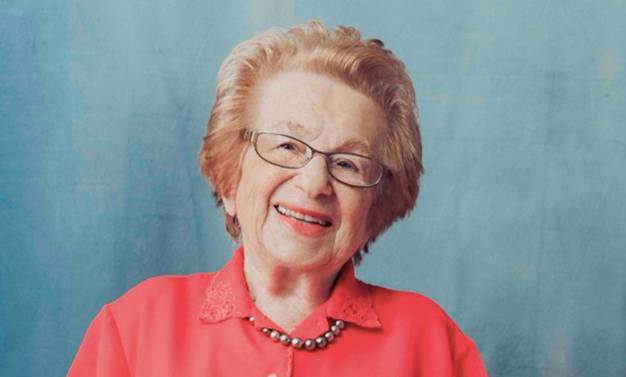 Meet Dr. Ruth Westheimer and join her birthday celebration! Born as Karola Ruth Siegel on June 4, 1928, in Frankfurt, Germany, she grew up as the only child in a privileged Orthodox Jewish family. However, her carefree childhood was violently shattered shortly after Kristallnacht when the SS came to take away her father. In 1939, she was sent on a Kindertransport to Switzerland, where she lived in an orphanage until 1945. She then emigrated to pre-state Israel, became known as Ruth Siegel (dropping the German-sounding Karola) and became a sniper and scout for the Haganah.

On June 4, 1948, her 20th birthday, she was wounded when a bomb exploded outside the kibbutz where she lived. Later she studied psychology at the Sorbonne in Paris. Upon receiving a restitution check for 5,000 marks (approximately $1,500) from the West German government, she left the Sorbonne and sailed with her French boyfriend to New York, where a place to live and a scholarship to the New School for Social Research awaited her. She later earned a Ph.D. from Columbia University and hosted a radio program with millions of listeners.

Dr. Ruth Westheimer has received many awards for her work, including an honorary doctorate degree from Trinity College and the Medal for Distinguished Service from Columbia University. Still active as ever, she has a strong social media following and continues to write books, teach, and give great advice. The Library of Congress has chosen to house her collected papers, joining the distinguished collections of other celebrated figures in her field — from Margaret Sanger to Sigmund Freud.

Sign up to meet her and then, as a free bonus, the day following the event you will be able to watch a film about her amazing and inspirational life!

Also, autographed copies of her best-selling children’s book Roller-Coaster Grandma are available ($18 including free US shipping). The perfect gift for a young person in your life!