Conversation – Worlds Apart: The Journeys of My Jewish Family in Twentieth Century Europe 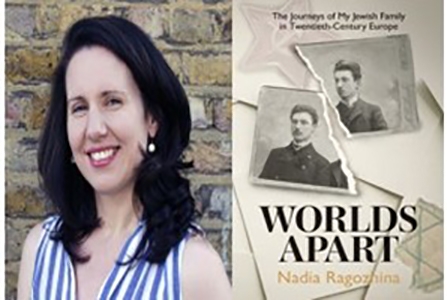 “Worlds Apart” is a remarkable family memoir that tells the story of two brothers, Adolphe and Marcus. Separated at the turn of the twentieth century, Adolphe settles in Switzerland, whereas Marcus ends up in Moscow, inspired by his Communist believes. They would never meet again. In her first book, BBC journalist and author Nadia Ragozhina rediscovers the missing part of the family and pieces together the stories hidden for generations. The lives of Adolphe’s and Marcus’ daughters and granddaughters are set against the Russian Revolution, Stalin’s repressions, the persecution of Jews across Europe and the Second World War. These are stories of ordinary people, trying to survive against the backdrop of some of the most tumultuous events of the twentieth century. Presented as part of the Yiddish Book Center’s 2022 Decade of Discovery – Women in Yiddish. This live event will be presented via Zoom and will stream live on the Yiddish Book Center’s Facebook