Maya Escobar, a Jewish Latina video director, performance artist, and creator of shomer negiah panties, has previously worked with young Jews, multiethnic Jews, and Jews in reunited Berlin to create works of art. For her newest project, Maya enlisted a new and unexpected collaborator: her father. Here’s what she had to say about it. When I received a call for entries for the Orchard Street Shul Artist Cultural Heritage Project, I was intrigued. An opportunity for artists, designers and historians to come together to explore the past and present collective memory of New Havenâ€™s final remaining historic synagogue. I had just returned from Germany, where I spent the summer working on an art-based research project called Berlinâ€™s Eruv. I conducted interviews with members of Berlinâ€™s Jewish community concerning the highly visible presence of the monuments and memorials commemorating Jewish life (death) and the impact these structures have had on their individual and communal Jewish identities.

Fascinated with the idea that history and community can be present but appear to be invisible without communal engagement, I wanted to apply this concept to a new project. I asked my father, Gonzalo Escobar, if he would be interested in collaborating with me.

For the last 13 years, my father — whose background is in education, psychology and socio-cultural anthropology — has produced a weekly radio show called Si Se Puede. He focuses on issues affecting local, state, and national Latino communities. My father has the amazing gift of connecting with people and making them feel comfortable. His interviews are never pre-scripted. Instead, his interviews are created dynamically, in response to what interviewees say about their personal experiences and the feelings about their topic that they project.

He agreed to work with me and the two of us drove from Chicago to New Haven to conduct interviews with former members and friends of the Orchard Street Shul. Since this is a community based, site specific project, we really didnâ€™t know what to expect prior to our arrival. Ultimately, whatever my father and I made would be created in response to the needs and wants of individuals we were about to meet.

Our interviewees told us stories of flirting on the front steps of the shul, eating herring and kichel, speaking â€œJewishâ€, finding first jobs, going on first dates, learning bar mitzvah portions, and hearing (or having) loud conversations in the womenâ€™s section. Their collective energy and enthusiasm was far too contagious to pass up and we determined that the actual act of sharing of stories (telling the stories, listening, engaging) was equally as important as the audio that we collected.

Not wanting these stories to begin and end with our recordings, but instead to inspire and trigger more conversations, we attempted to create an environment conducive to chit chat and shmoozing. Our piece, entitled Talking about Orchard Street is a low-tech installation where visitors will be invited to sit in comfortable armchairs, sample herring and kichel, listen to excerpts from interviews and engage in dialog with each other. 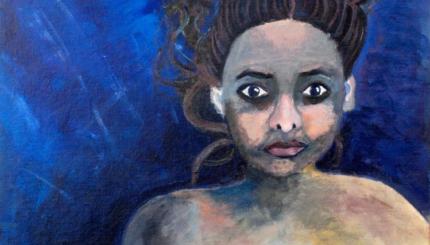 Haley M. is a college freshman at the College of New Jersey majoring in art education. Her recent series of paintings, seen throughout this piece, were inspired by her experience with mental illness. 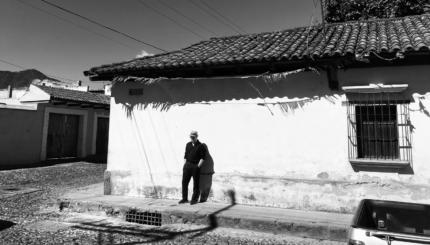 The Exodus and Jerusalem shine through life and work of photographer.