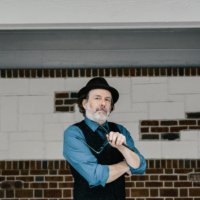 Ethan Daniel Davidson is a singer/songwriter who has recorded 10 albums and toured throughout North America and Europe. In 2005 he left his touring life and returned to his Detroit roots where he helps run the William Davidson Foundation established by his late father, Bill Davidson. The private family foundation strives to fulfill its founder’s legacy by advancing the economic, cultural, and civic vitality of Southeast Michigan, the State of Israel, and the Jewish community for future generations. In addition to his work at the Foundation, Ethan serves on numerous boards the Detroit area. He also is a Director of the Motown Museum and has a fellowship with the Wexner Foundation. He has a BA in English literature and his graduate work is in Middle Eastern History and Islamic Law at the University of Michigan, as well as Jewish Philosophy at the Jewish Theological Seminary. Ethan and his wife Gretchen live in Metro Detroit with their 3 boys.