The first two chapters of Genesis give us a picture of the world as it is first created. It is new, perfect, and full of promise. Yet once human beings are created, problems occur as we face our humanity, our mortality, our modesty, and our relationship with God.

Oh Adam and Eve, Eden was so great. And then you had to go and ruin it for all of us….

When the woman saw that the tree was good for eating and a delight to the eyes, and that the tree was desirable as a source of wisdom, she took of its fruit and ate. She also gave some to her husband, and he ate. Then the eyes of both of them were opened and they perceived that they were naked. And they sewed together fig leaves and made themselves loincloths.

1. What happened when the man and woman ate the fruit?
2. At what cost did we achieve wisdom?
3. What does “the sound of God moving about the garden” sound like?
4. Is it possible to hide from God?
5. Why does God ask the man (Adam) where he is? Shouldn’t God already know where Adam is?
6. Was it good or bad to eat the fruit (the apple)?

We have heard this story many times. Yet, questions remain. Can one hide from God? And why is God looking for Adam? The Midrash seeks to address these points.

“And the man and his wife hid themselves… amongst the trees of the garden.” Rabbi Ibo said, “His stature shrank to a hundred cubits.”

“Amongst the trees (eitz) of the Garden.” Rabbi Levi said, “This was a sign for his descendants, that they would be placed within wooden (eitz) coffins.”

“And YHWH, God called to the man and said, “Where are you (Ayekah)?” (3:8) “How (eikh) you have fallen! Yesterday… you extended from one end of the world to the other, whereas now (you can hide) among the trees of the garden!”

1. According to Rabbi Ibo, Adam and Eve were once larger than the trees. Then they shrank to the size of the trees. According to these rabbis, what does sin do to a person?
2. By the use of what wordplay does Rabbi Levi infer that Adam’s descendants will be placed in wooden coffins?
3. How does Adam’s status change as a result?
4. How does Adam’s behavior parallel our own behaviors?

At the very beginning, the first man and woman were larger than the trees. Then they shrank to the size of the trees. Through their own actions, they made themselves small. Adam was immortal. And yet, through his own actions, he made himself mortal.

Their actions are relevant today. We also do these destructive things to ourselves. By our own actions, our mistakes, and decisions, we, too, make ourselves small and mortal. And as God walks among the trees, God says to all of us, “Where are we?” And how are we? Now is the time for each of us to awaken ourselves to the elaborate system of hideouts we have created for ourselves. What are we hiding from?

And finally, one last word from the Talmud:

Reprinted with permission from Hillel: The Foundation for Jewish Campus Life. 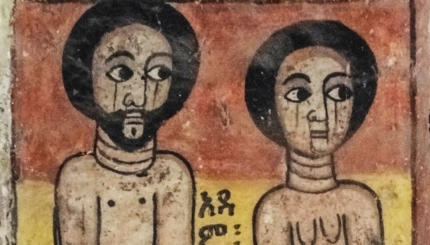 Adam and Eve's original relationship in which they were together as one flesh yet still distinct provides us with an ideal model.