Were Women Present at Sinai?

As several feminist scholars have observed, the Torah appears to have excluded women from the community that received the covenant at Sinai — or, at the very least, to have disregarded their presence. Just as the restriction on interacting with women in the days leading up to Matan Torah could only have been directed to a male audience, so too does the masculine language of the commandments seem to indicate that the listeners were men.

And yet, Hazal (the Sages), who transmitted and promoted a halachic system that differentiated between men and women on a variety of planes, nonetheless found it inconceivable that women were absent at the moment of revelation or that they were left out of God’s covenant with the People of Israel.

To compensate for the Torah’s male centered language, the rabbis went to great lengths to read women into the text and to argue for their inclusion in both the moment and the message.

To begin with, Hazal asserted that all negative commandments in the Torah are incumbent equally upon women and men. Thus, the rabbis never questioned women’s obligation with regard to the majority of the Ten Commandments, which are negative precepts, despite the Torah’s masculine language. To Hazal’s understanding, women were included automatically in the prohibitions to make graven images, to take God’s name in vain, to murder, to commit adultery, to steal, to bear false witness, and to covet a neighbor’s property.

In addition, the rabbis endeavored to demonstrate that the two positive commandments among the Ten–the mitzvah to observe Shabbat and the mitzvah to honor one’s parents–were also intended for women, despite several mitigating factors.

The Mishnah in Tractate Kiddushin (29a) rules that, in contrast to the negative commandments, women are exempt from certain positive mitzvot, namely those that are classified as time-bound. Shabbat falls within the parameters of this category of “mitzvoth aseh she-ha-zeman geraman” because it is observed only once a week, and women should, thereby, be exempt.

Yet Hazal declared that when a positive commandment is intrinsically linked to a negative one, women are equally obligated. Noting the distinction between the language employed in the Exodus rendition of the Ten Commandments–“Zakhor et Yom Ha-Shabbat le-kodsho” (Remember the Sabbath day and keep it holy)–and that employed in the Deuteronomy version– “Shamor et Yom Ha-Shabbat lekodsho” (Observe the Sabbath day and keep it holy)–the rabbis suggested that the two terms were uttered by God simultaneously, in a single breath, and are, thus, inherently intertwined.

Indeed, the Torah itself seems to take women’s obligation for granted, instructing the reader to ensure the Shabbat observance of “you, your son or daughter, your male or female slave, or your cattle, or the stranger who is within your settlements” but not “your wife,” implying that she herself is subject to the same commandment.

The Torah is straightforward about a child’s requirement to honor both father and mother, leaving no question as to women’s status as recipients of filial devotion. Yet women’s obligation to mete out the requisite honor to their own parents is not as obvious.

What About Honoring Parents?

Although honoring one’s parents is a positive commandment that is not time-bound, the type of positive precept, which, according to Hazal, is incumbent upon women, a related verse from Leviticus complicates matters.

Leviticus 19:3 states: “A man shall revere his mother and his father.” As the rabbis assert in a baraita that appears twice in the first chapter of Tractate Kiddushin, the opening word of this verse, “ish”–“a man”–(and, one might add, the masculine pronouns for “his mother and his father”) suggests that only male offspring are obligated to revere their parents.“From where,” ask the rabbis, “[do we learn that] a woman [is similarly obligated]?”

The baraita explains that despite the singular subject of the verse, “a man,” the verb “shall revere” appears in its plural form–“tira’u”–which serves to indicate that women are also included in the instruction.

Women as Objects Rather Than Subjects

The very tone of the query posed in this source, which assumes women’s inclusion rather than questioning it, demonstrates that Hazal were convinced of women’s equal obligation—and this despite the verse’s explicitly gendered wording. Although, from a rabbinic standpoint, women’s obligation in the Tenth Commandment is seemingly self-evident–“You shall not covet” is a negative precept–the wording of this dibrah is perhaps the most troubling from a feminist perspective.

Explaining “You Shall Not Covet”

Although it is unlikely that feminism was the guiding motivation behind Mekhilta de-Rabbi Shimon bar Yohai’s commentary on these verses, I would suggest that the midrash nonetheless betrays a certain discomfort with the inclusion of women in the Torah’s list of assets.

The midrash seeks to demonstrate that no item on this list is extraneous, rather, each clarifies a different point concerning the applicability of the commandment.The neighbor’s wife is included, according to the Mekhilta, so as to exclude the neighbor’s daughter, whom one could (assuming she is single) theoretically marry–in other words, coveting a connection with another human being is prohibited only when the desired relationship is in fact forbidden.

While this explanation does not overcome the patriarchal tone of the verse, it does suggest that the rabbis themselves felt a need to explain away, at least on technical grounds, the disconcerting appearance of women as objects, rather than subjects, of the central precepts of the Jewish religion.

To those of us Jewish women for whom it is both difficult and painful to consider the possibility that we were not present at Sinai, it may provide some comfort to know that the rabbis did not entertain such a notion. 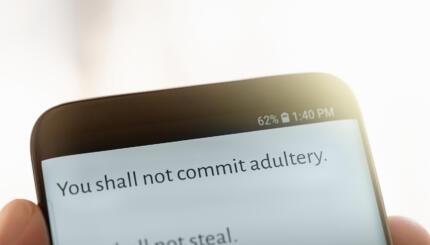 What are the most important rules for living justly and peacefully today?

Advertising and the Tenth Commandment

Advertising deals in dissatisfaction, argues one environmental activist. We buy to cure deficiencies that ads mercilessly invent, encouraging us to covet what others have.