One of Judaism’s oddest rituals is that of beating the aravot (willow fronds) during the services for Hoshanah Rabba, the final Hol ha-Mo’ed [intermediate] day of Sukkot. While there is no explicit commandment in the Torah, the rabbis of the Mishnah and Talmud understand the ritual of the aravah to be d’oraita [commanded in the Torah].

A ritual which was originally distinctive to the Temple, in which the aravot were laid by the sides of the altar and paraded around that altar of each day of Sukkot, its transfer and transformation to the synagogue (in which the aravah is no longer paraded, but beaten) leaves us with a series of unanswered questions: There is an ancient dispute about how it is to be performed (and where). Most perplexing of all, there is no persuasive explanation for why it is contemporary practice to beat the aravot against the floor.

So different a meaning is now read into it [the ritual of the willow] that its original purport can no longer be recognized.” A similar admission of ignorance, from a more traditionally religious source, affirms that “this custom of beating the aravah on the ground contains profound esoteric significance, and only the Great of Israel merit the knowledge of those secrets. The uninitiated should intend merely to abide by the custom of the Prophets and the Sages of all generations.

The Ritual of the Willow in Antiquity

The only biblical verse that deals with the willow frond is the one that establishes the mitzvah of the arba’ah minim, the four types of plants: “On the first day you shall take the product of the hadar trees, branches of palm trees, boughs of leafy trees, and willows of the brook, and you shall rejoice before YHWH your God seven days.” Rabbinic tradition understood that verse to mandate carrying all four plants together, and specified that before YHWH—meaning the Temple—the Arba’ah Minim [four species–lulav and etrog] were to be carried for seven days, but that everywhere else, only on the first day. After the destruction of the Temple, Rabban Yohanan ben Zakkai instituted carrying the Arba’ah Minim for all seven days in memory of the Temple.

While there is nothing explicit in the Torah suggesting any additional role for the aravot, tannaitic tradition takes such a ritual for granted, asserting that “the mitzvot of the lulav and of the willow branch are performed for six or seven days.” Only later does the Mishnah attempt to describe this ritual, first asking “How is the willow branch performed for seven days?” Only after explaining that the normal practice (in the Temple) is to perform the rite of the aravah for six days, unless the seventh day is Shabbat, does the Mishnah describe what actually happens.

How was the mitzvah of the aravah performed? There was a place below Jerusalem, called Motza. They went down to there and gathered large branches of willow, and they came and stood them against the altar. They blew a tekiah, teruah, tekiah blast. Each day they would circle the altar once, saying, “Please YHWH, save us, Please YHWH, vindicate us.”And on that day [the seventh day] they circled the altar seven times.

Thus far, we know only that the ritual of the aravot involved fetching them from a distant place, laying them against the altar, blowing a series of blasts on horn or shofar, reciting Psalm 118:28 (part of the Hallel), and then parading around the altar once each day and seven times on the seventh day. The mishnah does not specify whether or not this perambulation was accompanied by carrying the aravot.

The next mishnah then explains that there was no difference between the aravah ritual on a weekday and that of Shabbat except that the aravot were gathered in advance and stored in golden vessels to prevent them from wilting. Immediately following, Rabbi Yohanan ben Berokah says “They brought date palm branches and beat them on the ground at the sides of the altar. That day was called the day of the beating of the palm branches.”

Surprisingly, the only explicit Mishnaic attestation to beating something refers to palm branches, not to the aravah! In fact, claims Rabbi Yohanan ben Berokah, this ritual became the defining characteristic of the seventh day, giving the day its own special name. There is no reference in the Mishnah to beating willows, only to laying them by the altar and, possibly, to parading with them.

The Aravah and Later Sources

The Mishnah’s silence about beating willows, and its ambiguity about parading with them offered an urgent invitation to later rabbis to clarify and harmonize their readings of the Mishnah and contemporaneous practice. Needing to explain the practice of taking the willow branches outside of the Temple, in the period when the Temple no longer existed, the Talmud explains that this practice was instituted by the prophets Haggai, Zacharaiah, and Malachi as either yisod nevi’im an institution of the prophets or minhag nevi’im a custom of the prophets. The sole consequence of this distinction is whether or not taking the aravot requires a berakhah. (If it is merely a minhag, even of the prophets, then it does not.) Because the mitzvah pertained only to when the Temple stood, and was now performed as a custom in memory of the Temple, the willows were used separately from the lulav and etrog only on the final day of the Festival.

Having provided satisfactory lineage for continuing the ritual use of willows outside of the context of Temple worship, the Talmud also had to address the challenge of Rabbi Yohanan, and his claim that the ritual on the Sabbath really pertained to palm fronds. Rav Huna explains his colleague’s basis as emerging from the Torah’s use of kapot temarim as implying more than one palm frond: one for use with the Arba’ah Minim, and another for use independently. The Tanna Kamma, however, does not accept that argument, pointing out that the use of the defective kapot without the “vav” indicates that only one palm branch is to be used (and that one in the Arba’ah Minim). Rabbi Levi explains Rabbi Yohanan ben Berokah’s reasoning based not on a verse of the Torah, but on s’vara: The Jewish people are compared to a date palm because just as the palm tree has only one heart (core), so too the heart of the Jewish people is directed solely to God.

Later authorities, confronting the disparity between the explicit mention of beating palm fronds and the contemporaneous practice of beating willows, resort to somewhat strained readings in order to be able to harmonize the two. Thus the Tiferet Yisrael says that the disagreement between Rabbi Yohanan and the Tanna Kamma in the mishnah Sukkah 5 is only about what is done when the seventh day coincides with Shabbat. In that case, rabbi Yohanan understands the prophets as requiring the use of palm fronds because they won’t wilt when gathered a day in advance. But Rabbi Yohanan and the Tanna Kamma both agree about the use of willows when Hoshanah Rabbah doesn’t coincide with Shabbat. The Tosafot and Ritva both understand Rabbi Yohanan as calling for the use of palm fronds in addition to willow branches, Even with the strenuous efforts at harmonization, later authorities insist that the halakhah doesn’t follow Rabbi Yohanan.

This was far from the last halakhic dispute surrounding what it is we are to do with the aravot. Rashi understands havatah to mean shaking while Rambam and the Shulhan Arukh understand it to mean that the aravah is “struck against the grounds or against an object.” The Rema attempts to integrate both views by insisting that one should “do both—one shakes the willows and afterwards strikes them.” While a consensus of practice has developed during the medieval period, no similar consensus has surrounded the attempt to explain this strange and uncharacteristic mitzvah. 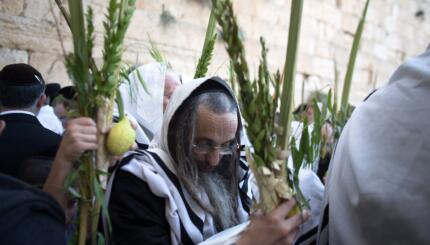 What Is Hoshanah Rabbah?

The last day of Sukkot has its own rituals

Sukkot History Up to the Second Temple Period

Observances in ancient times were associated with the land.