Two thousand years before modern psychology discovered “grief work,” the rabbis of the Talmud had established a staged series of steps to manage mourning. There are six basic phases of the Jewish bereavement cycle. Each has a specific time period and a set of major practices and common emotional states that assist the mourner through the grieving process.

Remember: Although these phases are time-bound, the emotions of a mourner’s grief may or may not correspond to these times. The experience of bereavement is highly individualistic and while the time may move quickly, the resolution of grief often takes months or years.

The following provides an overview of the Jewish approach to mourning:

Time: From the moment of death until the conclusion of the funeral.

Time: Seven days of shiva [literally, seven], beginning at the conclusion of the funeral (Day One) through the next six days, unless cancelled by a festival. The first three days are for intense mourning, followed by four days of mourning and reflection.

Major Practices: “Sit” at home, say Kaddish [prayer recited by mourners in praise of God] at prayer services conducted in the home (or synagogue), receive consolers, no work or shaving.

Time: From the end of shiva (Day Seven) through 30 days from the day of burial.

Major Practices: Return to work, say Kaddishat prayer services in the synagogue, no entertainment, men do not shave.

Time: From the day of burial through 11 months.

Major Practices: Saying Kaddish at prayer services in the synagogue, some restrictions on behavior (including attendance at genuinely happy events) until a full year has passed, unveiling of gravestone.

Time: Anniversary of the day of death.

Major Practices: Recite special memorial services in the synagogue, light memorial candle (although some.light a candle only on Yom Kippur), give tzedakah.

Reprinted with permission from A Time to Mourn, A Time to Comfort (Jewish Lights Publishing, 1993).

What Jewish mourners can expect at each stage of the bereavement process.

After burial Jewish law requires the mourner to turn from despair in the face of death to the affirmation of life. 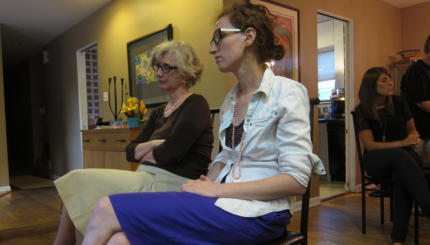 During this Jewish mourning custom, the entire physical environment of the mourner is transformed to acknowledge the immediacy of death.