For two weeks in August 1936, Adolf Hitler’s Nazi dictatorship camouflaged its racist, militaristic character while hosting the Summer Olympics. Soft-pedaling its anti-Semitic agenda and plans for territorial expansion, the regime exploited the Games to bedazzle many foreign spectators and journalists with an image of a peaceful, tolerant Germany.

Having rejected a proposed boycott of the 1936 Olympics, the United States and other Western democracies missed the opportunity to take a stand that — some observers at the time claimed — might have given Hitler pause and bolstered international resistance to Nazi tyranny. With the conclusion of the Games, Germany’s expansionist policies and the persecution of Jews and other “enemies of the state” accelerated, culminating in World War II and the Holocaust.

In 1931, the International Olympic Committee awarded the 1936 Summer Olympics to Berlin. The choice signaled Germany’s return to the world community after its isolation in the aftermath of defeat in World War I.

The Nazi claim to control all aspects of German life also extended to sports. German sports imagery of the 1930s served to promote the myth of “Aryan” racial superiority and physical prowess. In sculpture and in other forms, German artists idealized athletes’ well-developed muscle tone and heroic strength and accentuated ostensibly Aryan facial features. Such imagery also reflected the importance the Nazi regime placed on physical fitness, a prerequisite for military service.

In April 1933, an “Aryans only” policy was instituted in all German athletic organizations. “Non-Aryans”–Jewish or part-Jewish and Romani (Gypsy) athletes–were systematically excluded from German sports facilities and associations.

The German Boxing Association expelled amateur champion Erich Seelig in April 1933 because he was Jewish. (Seelig later resumed his boxing career in the United States.) Another Jewish athlete, Daniel Prenn — Germany’s top-ranked tennis player — was removed from Germany’s Davis Cup Team. Gretel Bergmann, a world-class high jumper, was expelled from her German club in 1933 and from the German Olympic team in 1936.

As a token gesture to placate international opinion, German authorities allowed the part-Jewish fencer Helene Mayer to represent Germany at the Olympic Games in Berlin. She won a silver medal in women’s individual fencing and, like all other medalists for Germany, gave the Nazi salute on the podium. After the Olympics, Mayer returned to the United States.

No other Jewish athlete competed for Germany. Still, nine Jewish athletes won medals in the Nazi Olympics, including Mayer and five Hungarians. Seven Jewish male athletes from the United States went to Berlin. Like some of the European Jewish competitors at the Olympics, many of these young men were pressured by Jewish organizations to boycott the Games. As most did not fully grasp at the time the extent and purpose of Nazi persecution of Jews and other groups, these athletes chose to compete.

In August 1936, the Nazi regime tried to camouflage its violent racist policies while it hosted the Summer Olympics. Most anti-Jewish signs were temporarily removed, and newspapers toned down their harsh rhetoric. Thus, the regime exploited the Olympic Games to present foreign spectators and journalists with a false image of a peaceful, tolerant Germany.

Movements to boycott the 1936 Berlin Olympics surfaced in the United States, Great Britain, France, Sweden, Czechoslovakia, and the Netherlands. Debate over participation in the 1936 Olympics was most intense in the United States, which traditionally sent one of the largest teams to the Games. Some boycott proponents supported counter-Olympics. One of the largest was the “People’s Olympiad” planned for the summer of 1936 in Barcelona, Spain. It was canceled after the outbreak of the Spanish Civil War in July 1936, just as thousands of athletes had begun to arrive.

Individual Jewish athletes from a number of countries also chose to boycott the Berlin Olympics. In the United States, some Jewish athletes and Jewish organizations such as the American Jewish Congress and the Jewish Labor Committee supported a boycott. However, once the Amateur Athletic Union of the United States voted for participation in December 1935, other countries fell in line and the boycott movement failed.

The Nazis made elaborate preparations for the August 1-16 Summer Games. A huge sports complex was constructed and Olympic flags and swastikas bedecked the monuments and houses of a festive, crowded Berlin. Most tourists were unaware that the Nazi regime had temporarily removed anti-Jewish signs, nor would they have known of a police roundup of Roma in Berlin, ordered by the German Ministry of the Interior. On July 16, 1936, some 800 Roma residing in Berlin and its environs were arrested and interned under police guard in a special camp in the Berlin suburb of Marzahn. Nazi officials also ordered that foreign visitors should not be subjected to the criminal penalties of German anti-homosexuality laws.

Forty-nine athletic teams from around the world competed in the Berlin Olympics, more than in any previous Olympics. Germany fielded the largest team with 348 athletes. The U.S. team was the second largest, with 312 members, including 18 African Americans. American Olympic Committee President Avery Brundage led the delegation. The Soviet Union did not participate in the Berlin Games.

Concerted propaganda efforts continued well after the Olympics with the international release in 1938 of “Olympiad,” the controversial documentary directed by German filmmaker and Nazi sympathizer Leni Riefenstahl. She was commissioned by the Nazi regime to produce this film about the 1936 Summer Games.

Germany emerged victorious from the XIth Olympiad. German athletes captured the most medals, and German hospitality and organization won the praises of visitors. Most newspaper accounts echoed the New York Times report that the Games put Germans “back in the fold of nations,” and even made them “more human again.”

Some even found reason to hope that this peaceable interlude would endure. Only a few reporters, such as William Shirer, understood that the Berlin glitter was merely a facade hiding a racist and oppressively violent regime.

As post-Games reports were filed, Hitler pressed on with grandiose plans for German expansion. Persecution of Jews resumed. Two days after the Olympics, Captain Wolfgang Fuerstner, head of the Olympic village, killed himself when he was dismissed from military service because of his Jewish ancestry.

Germany invaded Poland on September 1, 1939. Within just three years of the Olympiad, the “hospitable” and “peaceable” sponsor of the Games unleashed World War II, a conflict that resulted in untold destruction. With the conclusion of the Games, Germany’s expansionist policies and the persecution of Jews and other “enemies of the state” accelerated, culminating in the Holocaust.

A coordinated Palestinian terrorist attack and hostage situation in which 11 Israeli athletes were killed. 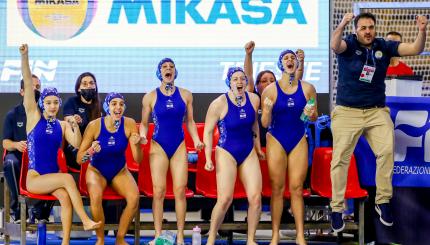 The prevailing stereotypes of Jews as bookish, nerdy, or business-minded have led to a widespread assumption that, on the whole, ...

Although the hooked cross predates the Nazi flag by 5,000 years, today it is widely considered a hate symbol.