Symbolism in the Bible

Parashat Vayakhel gives us a detailed description of the construction and furnishings of the Tabernacle; in fact, more than most of us wish to hear. Why include this data? Why does it matter? It matters because in the ancient world, a temple was a model of the cosmos (Mircea Eliade, The Myth of the Eternal Return, 1954). How the temple is designed and furnished and where objects are positioned express symbolically what its builders believe about the nature of the cosmos.

Vayakhel gives us the specifications for these symbols, but it cannot tell us all that they mean. Symbols and metaphors exist precisely because they point toward what cannot be entirely expressed. Moreover, symbols and rituals are not static. They grow and change along with the people who use them, acquiring new layers of meaning along the way.

As an example, let’s look at a symbolic object from the Tabernacle that we recognize, the Menorah (lampstand). What does it mean? The Menorah’s function is to give light, and light is an important element in our own ritual acts as well. We kindle lights for Shabbat, Havdalah, Yom Tov (holidays), yahrzeit (memorial occasion). The philosopher Ernst Cassirer says that the creation of light, which begins many creation myths, represents the creation of consciousness (Language and Myth, 1946).

Perhaps, when we ritually kindle light, we reenact the dawning of consciousness that enables us both to know God and to be aware of ourselves. Is the Menorah a lamp representing the light-giving or knowledge-giving aspect of the cosmos?

Not Just a Lamp

The Menorah is not just any lamp, however. It is a giant lamp of unusual design, so tall that a priest must ascend a ramp to light it. Twice, in Exodus 25:31-40 and then in our parsha (Exodus 37:17-24), the Menorah is painstakingly described: a golden base, a tall shaft, six golden branches issuing from the sides, each branch bearing cups shaped like almond blossoms, detailed with calyx and petals, plus more blossom-cups on the shaft itself. Atop these branches are seven golden lamps.

Clearly the Menorah embodies some kind of metaphor. But metaphor has rules, just like tennis or Scrabble. One rule is that there has to be some link between the tenor (the topic under discussion) and the vehicle (the concrete object to which it is being compared).What, then, is tall, has a kaneh (stem), with kanim (branches) extending from it, and p’rachim (flowers) intermixed with bud-like swellings (kaftorim)? The Menorah is a representation of a flowering almond tree!

The almond tree is distinctive not only in that it blossoms early, but also in that it then rapidly buds leaves, develops new branches, and forms its sustaining fruit-all before the flowers’ calyx drops off (Nogah Hareuveni, Nature in Our Biblical Heritage, 1980, p. 130). Its Hebrew name, shaked, means “the early waker,” and it may symbolize God’s watchfulness or the speed with which God responds (see Jeremiah 1:2).

It is also the legitimating emblem of the Aaronite priesthood. At the end of Korah‘s rebellion in Numbers 17, Moses deposits the staffs of all the Israelite chieftains in the Tent of Meeting, “and there the staff of Aaron…had sprouted: it had brought forth sprouts, produced blossoms and borne almonds” (17:23).

Trees, as well as light, are associated with consciousness for Jews. Our moral consciousness comes from having eaten the fruit of a tree (Genesis 3). The Torah is “a tree of life to all who hold fast to her” (Proverbs 3:18). Trees are elders of the living earth. Their rootedness, endurance, and capacity for renewal is a blessing extended to the righteous: “The righteous shall flourish like the date palm” (Psalm 92:13). The righteous too shall be trees of life.

But the Menorah is yet a different sort of tree, because its branches are crowned with bowls filled with oil that are lit regularly by the priests. Who ever heard of a tree perpetually on fire?

He gazed and there was a bush all aflame, yet the bush was not consumed…. God called to him out of the bush: “Moses! Moses!” He answered, “Here I am.” And [God] said, “Do not come closer! Remove your sandals from your feet, for the place on which you stand is holy ground!” (Exodus 3:2-5).

In his book Sinai and Zion (1985), Jon Levenson describes how the religion of Sinai was transformed into the religion of Zion. In the Tanach (Hebrew Bible)’s account of the settlement of the Land of Israel, Sinai – the wilderness mountain of the s’neh (thornbush), the site of Israel’s revelation and covenant-was refashioned as Zion, the holy mountain of the Jerusalem temple. The Burning Bush itself was reproduced as a golden tree lit by priests. Levenson speculates that the emblem of the deity of Sinai was some sort of tree. He points out that the blessing in Deuteronomy 33:16 identifies God as shochni s’neh, “the Presence in the Bush.”

The feminist theologian Nelle Morton describes metaphor as an explosive process with a trajectory, like a meteor (The Journey is Home, 1985).The tree on fire that is not consumed-this is an image on an immense journey. The metaphor has traveled from Sinai to Zion, to Exile and beyond, and we have not even begun to exhaust its resonances.

A tree on fire embraces what we misperceive as antitheses: earth and heaven, matter and energy. What we are accustomed to polarize is revealed to us in blazing union. A tree on fire unconsumed proclaims that what is material, temporal, perishable, can sustain what the Christian theologian Rudolf Otto calls the “fearsome and fascinating mystery” of the presence of God (The Idea of the Holy, 1923). If we were only able to see, the whole earth would appear to us like a tree on fire, and we would see a tree on fire in every human frame.

We cannot relive the moment when a startled shepherd sees a terrible and wonderful sight: a tree on fire, unconsumed. We can only make a memory tree to remind us of that moment, an artifice that we ourselves ceremoniously set afire amidst song and liturgy. The memory tree is a tree of wonder only and not a tree of terror. We take our chances, stubbornly continuing to set our memory-tree on fire-real fire, with all its potential for enlightenment and danger, reproducing the encounter with that fiery presence we seek and yet fear: the revealer of mysteries, the dweller in the bush. 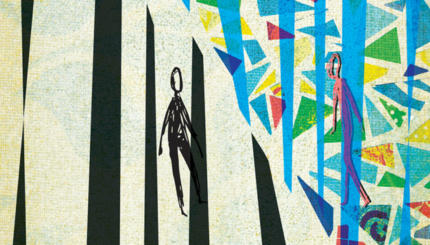 Successor to the prophet Elijah, he healed the sick, raised the dead, and made iron float—but he was also a prophet who made serious mistakes.