On October 28, 1940, Fascist Italy invaded Greece from bases in Albania, which Italy had occupied and annexed in April 1939. Within a matter of days, however, the Greek army drove the Italians back into the Albanian mountains, where the conflict reached a stalemate. In order to secure the Balkan flank in anticipation of the attack on the Soviet Union, planned for June 22, 1941, Hitler ordered the invasion of Yugoslavia and Greece. On April 6, 1941, the Germans and Italians, supported by Bulgarian and Hungarian units, attacked. The Yugoslav government fled to London and the leadership of the armed forces surrendered on April 17. By April 28, Axis troops had pacified most of the Greek mainland, but Greek resistance on the islands continued until June.

After the Greeks surrendered, Germany, Italy, and Bulgaria divided the country into zones of occupation. Germany occupied western Macedonia (including Salonika), eastern Thrace along the Greco-Turkish border, the environs of Athens, western Crete, and the Greek islands in the north Aegean Sea close to Turkey. Bulgaria occupied western Thrace. Italy took the remainder of the Greek mainland, eastern Crete, and the Greek islands in the south Aegean, the eastern Mediterranean, the Ionian, and the Adriatic Seas. Germany and Italy jointly occupied Athens, the Greek capital.

At the time of the Axis occupation in 1941, nearly 72,000 Jews lived in Greece. Differing priorities of Germany, Italy, and Bulgaria with regard to the Jews impacted upon their fate.

Despite its alliance with Germany, Italian military occupation officials generally ignored German demands to implement the mass murder of Jews, and even protected Jews. Thousands of Jews residing in the German-occupied zone fled to the relative safety of the Italian occupation zone. Only after Italy surrendered to the Allies on September 8, 1943, did the Germans take control in the Italian occupation zones in Greece and implement the “Final Solution” in all of Greece.

The largest prewar Greek Jewish community was in Salonika, located in northern Greece and later in the German occupation zone. At the time of the German occupation, around 43,000 Jews resided in Salonika. In July 1942, German military authorities deployed 2,000 male Jews on forced-labor projects in Salonika. In February 1943, the Germans concentrated the Jews of Salonika in two enclosed ghetto-like areas of the city. Between March 20 and August 19, German officials deported over 40,000 Jews from Salonika to the Auschwitz-Birkenau killing center. At Birkenau, the SS murdered virtually all of the Salonika Jews upon arrival.

Bulgarian-Annexed Areas in the Balkans

Bulgaria occupied western Thrace in 1941 in the hope of eventually annexing the territory. In March 1943, in compliance with German demands, Bulgarian military and gendarmerie units concentrated around 4,200 Jews from Thrace at assembly points in Radomir, Dupnitsa, and Gorna Dzhumaya. The Bulgarian authorities then turned the Thracian Jews over to the custody of the Germans, who deported them to the Treblinka killing center in German-occupied Poland, where the German staff and auxiliary police guards murdered them.

German Occupation of the Greek Mainland

After Italy surrendered to the Allies on September 8, 1943, Germany occupied all of Greece. During 1944, the German army and naval units concentrated the Jews residing in the former Italian occupation zone in Greece at assembly points. German officials then deported them to Auschwitz-Birkenau: 800 Jews from Athens, almost 2,000 from the island of Corfu, and almost 2,000 from the island of Rhodes. The SS murdered the overwhelming majority of Jews in these transports upon arrival.

Romania’s decision to switch sides and join the Allies on August 23, 1944 and the Soviet occupation of Bulgaria in early September rendered the German military position in Greece untenable. The German Army High Command ordered the evacuation of Greece through Yugoslavia. By this time, nearly 60,000 Greek Jews had died in the Holocaust. Thousands survived either hiding with friends or by joining the partisans. 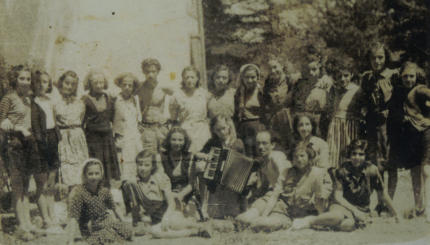