The following article is reprinted with permission from Hillel: The Foundation for Jewish Campus Life.

Masei, the final portion of the book of Numbers, begins with a retelling of the journey from Egypt to the plains of Moab at the banks of the Jordan. The parsha goes on to give instructions for dwelling in the land, describing the boundaries that it encompasses, the establishment of Levitical cities, and cities of refuge.

At this point in the narrative, the children of Israel are poised on the border of the promised land, ready to make it their own. Why does the Torah now choose to recapitulate the beginnings of their 40-year journey?

The version of the journey as presented here is interesting in terms of what is emphasized and what is minimized. Although the Sea of Reeds and the wilderness of Sinai are listed, no comment is made of the miraculous events that occurred there which changed the course of human history. Rather, the only commentary we get of the places visited reads like a travel diary: “And they journeyed from Marah and came unto Elim, and in Elim were 12 springs of water, and threescore palm trees; and they pitched there. And they journeyed from Alush and pitched in Rephidim, where there was no water for the people to drink.”

A midrash (Bamidbar Rabbah XXIII:3) explains this personal and everyday retelling: “It may be likened to a king who had taken his ailing son to a distant place to be cured. On the return journey, the king would lovingly recount to the lad all the experiences they went through at each of their halting places. ‘At this spot we slept; at that, we had a cool resting place from the heat; at the other, you were overcome by pains in the head!’ Israel is God’s child, upon whom God bestows compassion even as a father bestows compassion on his son.”

What is the connection between the king and his son and God and Israel? Why, particularly, should Israel be compared to a child who is sick?

Judaism is both a towering historical monument and a very personal way of living. To comprehend it in its full enormity would be difficult and intimidating. Sometimes, the best way to understand it is by using our own personal, everyday experiences set against the backdrop of history. This version of the sojourn in the wilderness is like the family album, looking at the foundation of our beliefs from an everyday viewpoint. 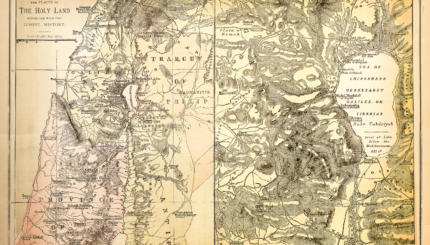 Journeying with the Divine

Every step of the Israelites' journey is framed in relation with God.