Reprinted with permission of The Gale Group from
Contemporary Jewish Religious Thought
, edited by Arthur A. Cohen and Paul Mendes-Flohr, published by Charles Scribner’s Sons.

In examining how the rabbis [of the talmudic era] sought to handle this problem [i.e. the existence of evil and suffering], we may say that their approach belongs more to what we would now call religious anthropology than to philosophical theology. This distinction is of basic importance. To the philosopher or theologian concerned with the problem of theodicy, the existence of morally indifferent causes of suffering appears to be incompatible with the existence of an all‑powerful and benevolent God. Such an individual is faced with the problem of reconciling what seems to be this incompatibility of facts and beliefs. How is it logically possible to claim that God is the just Lord of history in view of the senseless evil manifest in the world?

Changing the Focus from God’s Responsibility to Humanity’s Response

The problem of suffering appears in a different light, however, when the focus is more on its anthropological than its theological implications. The questions then become: How do we respond to events that can call into question our whole identity as God’s covenantal community? Can we allow ourselves to embrace a personal God knowing that chaos can at any moment invade our reality and arbitrarily nullify all our efforts and expectations? Do we have the strength to open ourselves to a personal God in a world filled with unpredictable suffering? When her child dies, the question a mother faces is less how to explain the logic of God’s omnipotence than whether she has the strength and emotional energy to love again.

From the anthropological perspective on the problem of suffering, therefore, the prime concern is not so much to defend the notions of divine justice and power. It is, rather, as in other personal relationships, to determine what measure of continuity, stability, and predictability can enable the relationship with God to survive all shocks.

How the rabbis confronted the problem can be shown by examining some texts, of which the first contains a discussion by the sages of two conflicting descriptions of divine providence.

Different Expectations in the Human-Divine Relationship

Although some authorities take “he inherits the land” to mean “he has a part in the World to Come,” the emphasis in this statement is decidedly this-worldly. Indeed, this statement from the Mishnah is hardly different in spirit from the Bible, with its perspective that is earthbound. The Mishnah typically invites one to expect prosperity in this world if one is loyal to God’s mitzvot to anticipate rain in due season, abundant crops, many children, security from adversity, a long and good life.

The baraita (the external teaching of a tanna [a sage from the time of the Mishnah] not included in the Mishnah [itself]) to the above mishnah, however, claims that when people strive to be righteous in this world, God’s response is to inflict upon them suffering that will expiate their sins, so that they can enjoy complete bliss in the World to Come. But people who prefer iniquity to righteousness are allowed to prosper in this world, because they have already ensured themselves punishment in the World to Come.

Embracing an Outlook That Accords with One’s Experience

The mishnah and the baraita embody different kinds of expectations that individuals may permit themselves in their living relationship with God, different risks that they are prepared to take in the light of that felt relationship. Since the aim of the talmudic discussion is to find a viable way of life, not a metaphysical truth, the Talmud does not give exclusive preference to any of the ways offered. Some Jews may find one outlook more consonant with their sensibilities and personal experience than another; others may feel more at ease with the other. Both ways are authentic, because both seek to preserve commitment to the mitzvot.

In the talmudic discussion, Rava [who died in 352 CE] points out that the baraita accords with Rabbi Jacob, who taught that there was no reward for mitzvot in this world and that wherever the Torah promises a reward for a mitzvah, the reward is to be expected only in the next world. To illustrate his teaching, Rabbi Jacob told a story of a child who died immediately after fulfilling two mitzvot: the child obeyed his father, who had told him to take birds from the loft, and he obeyed the biblical requirement of letting the mother bird go free before taking the young ones. Yet although the Bible promises long life to those who fulfill either of these mitzvot, on descending from the loft the boy fell and was killed (Babylonian Talmud Kiddushin 39b).

Rabbi Jacob refused to expose people to the risk of expecting that their obedience to the mitzvot would ensure them material prosperity and a long life. For when people hold such expectations, the sudden death of a child who has just performed mitzvot that promised long life may create a total value disorientation if things happen that suggest that the promises of God cannot be relied upon, trust in him and readiness to perform his mitzvot may collapse. The solution chosen by Rabbi Jacob was simple and drastic. Eliminate every expectation of reward in this world for the performance of mitzvot. Remember that the covenantal relationship with a personal God does not end with death. Look forward to the promised resurrection of the dead. Never forget that God loves you and that this is why he gave you the Torah and the mitzvot, which will guarantee you reward in the World to Come.

The authors of the statement in the mishnah, on the other hand, preferred to educate Jews to believe that everyday reality can also contain joy. To give up anticipation of reward in this world for mitzvot could destroy the vitality of the sense of personal relationship with God that animates covenantal religious life. The distant promise of the resurrection of the dead is too weak a peg to bear on its own the entire weight of human expectations.

The living God of the Bible must be seen to be active also in present reality if Jews are not to grow weary of God’s covenant and despair of his love. If we are taught to expect reward for mitzvot also in this world, then sometimes we may be disappointed, but we will also attach greater significance to the joyful moments in our lives by seeing them as signs of divine approval. When the impetus to live that joyful moments provide is thus reinforced, we will also be able to take the disappointments in our stride.

Either Way, Maintaining the Connection to God and Mitzvot

The rabbis of the mishnah and Rabbi Jacob did not disagree regarding belief in a personal God. Both also shared the same objective reality: a world of painful tragedy and undeserved suffering, of people snatched away in the midst of performing noble deeds.

Nonetheless, they are able to have different expectations of a personal God and different styles of living the covenantal life. The choice between the different views is left to the sensibilities of the individual reader. All that the Talmud demands of its readers is that they find some approach that will enable them to maintain their commitment to the mitzvot in the world as they experience it. There is even nothing to prevent the same person from alternating between different approaches at different moments in his or her life.

In general, the rabbis sought to transform suffering into a means of deepening their understanding of the Torah and the mitzvot. When tragedy occurred, their characteristic question was, “What can we learn from this?” Typically, they taught that repentance (teshuvah) was always a proper response to suffering.

“If a man sees that painful sufferings visit him, let him examine his conduct. For it is said: ‘Let us search and probe our ways, and return to the Lord’ [Lamentations 3:40]. If he examines and finds nothing, let him attribute it to the neglect of the study of the Torah. For it is said: ‘Happy is the man whom Thou chastenest, O Lord, and teachest out of Thy Torah’ [Psalms 94:12]. If he did attribute it [to that], and still did not find [anything amiss], let him be sure that these are chastenings of love. For it is said: ‘For whom the Lord loves, he corrects [Proverbs 3:12].’” (Berakhot 5a)

By utilizing tragedy and suffering as a catalyst for active moral renewal, the Judaic tradition prevents political powerlessness from creating feelings of personal impotence and loss of self‑esteem. If events in the larger world are unpredictable, if the nation is subject to the violence and whims of foreign rulers, the rabbinic mind does not fall victim to despair, disillusionment, and escapism, but rather focuses on the personal and the communal as the framework to contain its activist dignity.

The call to repentance–“If a man sees that painful sufferings visit him, let him examine his conduct”–should not, therefore, be seen as a metaphysical justification of evil. Rather, it is advice that encourages the Jew to sustain and give meaning to the covenantal relationship despite the mystery of suffering.

If Jews have a special relationship with God, then why is there so much suffering? 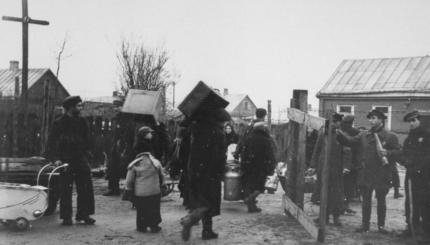