In biblical times, a woman whose husband died childless would marry his brother in order to give her late husband a surrogate heir within the family line. This is the law of yibbum, which is what Tamar had in mind in Parashat Vayeshev when she remained a widow, waiting to marry Shelah, her father-in-law Judah’s third son. When Judah withheld Shelah, he denied her the only honorable recourse that a woman had during that time, when her self-worth and economic security were dependent on her having a husband and a child.

With this mercy denied, Tamar had to resort to desperate measures. She changed out of her widow’s clothing, veiled herself, and waited for Judah on the road. Assuming that she was a prostitute, he slept with her and agreed to pay her. In seeking out Judah with the hope of conceiving a child, Tamar used the only tool available to her–her sexuality.

The pattern of economic conditions driving women (and less often, men) to sex work is, of course, not a thing of the past. In the Global South especially, societies are structured in such a way as to often make sex work the only economically viable option for women. Sex work accounts for the income of millions of women worldwide and the global sex industry is a vibrant and active business.

But of greater concern than the existence of sex workers who are driven into a trade because of a lack of real options is the fact that these women are often blamed for the industry’s existence and their role in it. Governments around the world arrest, prosecute, and imprison women for their participation. Yet their work is fueled by the cycles of sexism and poverty that were created by men, often the same men who are the clients of these targeted and condemned women.

This pattern is illustrated when Judah is told that Tamar is pregnant. “Your daughter-in-law has played the harlot,” Judah is told. “In fact, she is with child by harlotry” (Genesis 38:42). Tamar’s pregnancy is seen as proof of prostitution, and Judah’s immediate reaction is that she should be burned. He shows no hesitation with punishing a prostitute, even though he himself not only participates in the trade, but is also the direct cause of Tamar’s involvement in it.

But executing Tamar will not end the sex trade or Judah’s involvement with her, nor will it rectify the situation that brought Tamar to use her sexuality to fulfill an economic need. In our contemporary context, the same holds true. While individuals and governments alike demonize and punish women, it is the eradication of the oppressive systems that is needed. We must make systemic changes addressing the root of the problem to ensure women’s economic equality and strength.

The founder of the Hasidic movement, Rabbi Yisrael Baal Shem Tov, believed that any flaw he found in another person must also be present in him. When Judah finds out that he was the propagator of Tamar’s transgression, he says “tzadkah mimeni“–she is more right than I (Genesis 38:26). To read tzadkah mimeni through the lens of the Ba’al Shem Tov, we see a deep transformation in Judah.

He finally sees the face of the accused and, rather than looking for her guilt (or, to be fair, even her innocence), he looks inside himself and admits what he has done wrong. In this one phrase he implicates himself in the drama, both as client of Tamar’s sex trade and as the propagator of an act of sexism–denying her his son–that stole Tamar’s viable option to begin with, leaving her with no recourse.

The first step in ending the sex trade is for governments and societies to look within themselves. Rather than prosecuting and demonizing sex workers, we must change the structures that make this kind of work the only viable option for women struggling with poverty. The sexism that allows the sex trade to flourish must be examined in government policy and in our own personal biases.

Parshat Vayeshev illustrates this accountability on a personal level. As Judah eventually did, each of us must look inside ourselves and search for those ways in which we, and the societies and governments that represent us, reinforce unjust structures. We can, and should, look at those we judge and find a way to say “they are more right than I.”

A righteous woman determined to have children. 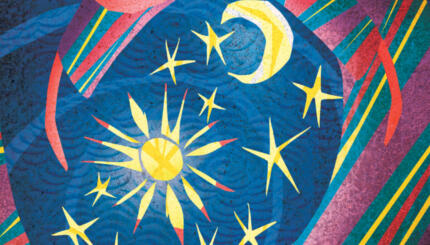 This Torah portion tells the story of Tamar, a woman who saw the possibility of new life where others saw only death.