A Map Of Pluralism

Over the years I have had many friends committed to breaking the law.

Do not question the company I keep. They are not common criminals. They have only broken laws, through acts of civil disobedience, that they believe to be unjust.

What fascinates me about some of them is how they relate to laws that they believe to be just. They obey them; all of them. I know a man who has been arrested many times for civil disobedience in support of nuclear disarmament. He stops and waits at every crosswalk for the light to turn green. He never jaywalks, litters, double-parks or uses someone else’s software. His commitment to these laws is as strong as his opposition to those he sees as unjust. Even those who disagree with his opinions on disarmament, are forced to agree that this is a man of great principle and character. Respect for him is universal.

This week we begin reading the Book of Bamidbar (Numbers). It contains dramatic narratives and teaches important ethical and spiritual obligations still relevant today. However, it also spends a considerable amount of time describing the Mishkan (Tabernacle) and the camp of the Jewish people that surrounded it in the desert. How would the Mishkan be transported? What was the position of each of the tribes within the camp? These aspects of daily life in the desert are described in great detail.

Ramban, also known as Nachmanides, the great 13th-century scholar, community leader and mystic explains that all these details teach us a profound obligation. The Mishkan was a place of infinite sanctity. It symbolized the ethical and spiritual core of Judaism. Such a place must have shomrim, guardians or keepers watching over and caring for it. The priests who administered the Mishkan and the tribes who surrounded it served that purpose. This need for guarding was not for protection from some enemy. It was for the purpose of giving kavod, glory and honor to this special place.

Rambam, or Maimonides, a contemporary of Ramban, argues that this obligation extended to the permanent temple built in Jerusalem. Each night 24 teams of priests would act as shomrim, guarding and keeping watch over the temple. These priests would stay awake throughout their watch. When their watch ended, writes Rambam, they would remove their priestly garments, don their “street clothes” and sleep humbly on the ground. “This was like all guardians of a king’s palace who never take the luxury of sleeping on beds.”

These shomrim were not only giving honor to God. When people saw how the Mishkan or temple was cherished, says one commentator, “their hearts would be softened” to return to the values which that place represented.

The Torah in the Book of Bamidbar, or known in English as Numbers, is teaching each of us how to be a proper shomer. We cannot content ourselves with protecting that which we care about from its enemies. We must live our lives in a way that gives kavod, honor and glory, to our causes and which softens the hearts of all those who see us.

Transmitting Jewish culture by embodying Jewish practice is part of the responsibilities of Jewish parenting. 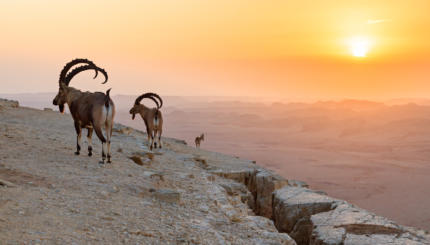 Self-Accounting in the Wilderness

For the Rabbis, the wilderness is actually a desirable place to be.