Before Jacob‘s epic encounter with Esau, reuniting with his brother after decades of estrangement, Jacob brings his family and possessions across a stream. He then returns at night to the other side of the stream, and the Torah narrates that: “Jacob remained alone.” The rabbis see the word “alone” (levado) as superfluous, and understand it as related to the similar sounding lecado, “for his vessel,” yielding, “Jacob remained for his vessel.”

The seeming absurdity of Jacob’s action becomes understandable when one examines his worldview: he believes that everything in his possession comes from God, has a specific purpose, and must be used to its full potential. As one rabbinic commentary explains, each material item that a righteous person uses is a means toward spiritual repair in the world. Jacob went back for the vessels to ensure they were used in the optimal way. Had he not, their full potential would not have been realized.

The truly righteous recognize the value of their God-given possessions, and are very careful with them, no matter how small or seemingly insignificant they are. While not overly attached to material things, they do not dispose of objects prematurely or use them inappropriately. Indeed, the Talmudic sage Rabbi Yochanan, on his deathbed, told his students to remove the vessels from his room lest they become contaminated by his corpse, and thereby unusable (Berakhot 28b).

The Sefer HaChinuch, an exploration of the 613 commandments that was written in 13th-century Spain, offers insight into the spiritual root of Jacob’s action. Regarding the commandment not to wastefully destroy anything (bal tashchit), it says:

The root reason for the precept is known: for it is in order to train our spirits to love what is good and beneficial and to cling to it; and as a result, good fortune will cling to us, and we will move well away from every evil thing and from every matter of destructiveness…They will not destroy even a mustard seed in the world, and they are distressed at every ruination and spoilage that they see; and if they are able to do any rescuing, they will save anything from destruction, with all their power.

The Sefer HaChinuch helps explain what motivated Jacob’s exceptional effort to save a few vessels: to love and cling to what is good in the world, and to avoid waste of any degree.

In this vein, Rabbi Samson Raphael Hirsch explains that the command “do not destroy,” is “the most comprehensive warning to human beings not to misuse the position that God has given them as masters of the world and its matter to capricious, passionate, or merely thoughtless wasteful destruction of anything on earth.” He elaborates on this in his book Horeb by means of a hypothetical statement of God’s:

“Only if you use the things around you for wise human purposes, sanctified by the word of My [God’s] teaching, only then are you a mensch and have the right over them which I have given you as a human…However, if you destroy, if you ruin, at that moment you are not a human…and have no right to the things around you. I lent them to you for wise use only; never forget that I lent them to you. As soon as you use them unwisely, be it the greatest or the smallest, you commit treachery against My world, you commit murder and robbery against my property, you sin against Me!”

Jacob’s re-crossing of the stream exposes a striking contrast between two worldviews on material possessions. One sees the things we own as essential and indispensable; the other views them as expendable and disposable.

For us, living in a world of abundance where it is so easy to throw things away, Jacob’s example presents a particular challenge. In 1955, the retailing analyst Victor Lebow highlighted a trend in consumer society away from greater mindfulness regarding possessions and toward a more short-term view. He wrote:

“Our enormously productive economy…demands that we make consumption our way of life, that we convert the buying and use of goods into rituals, that we seek our spiritual satisfaction, our ego satisfaction, in consumption…We need things consumed, burned up, worn out, replaced, and discarded at an ever increasing rate (The Journal of Retailing).”

The trend he describes has only become more pronounced in the half-century since Lebow wrote these words. We throw away useable items because they are a few years old and maybe outdated by new products; we discard clothing and appliances and buy new ones instead of repairing them; and we commonly buy goods wrapped in disposable packaging.

Our relationship with the resources we consume has significant consequences for the planet. Most of the big things that happen in the world are really just the consequences of a lot of small things put together. A global consensus of scientists has stated that human actions are changing the climate balance on earth, with likely negative impacts for human civilization. They foresee more intense storms and floods, shifting disease vectors, and sea level rise threatening hundreds of millions of people in low-lying areas.

How is it possible that human beings could cause such widespread imbalance? It really comes down to the small vessels–mining aluminum for one can, trucking one glass bottle to a faraway dump, as well as countless other small acts–multiplied by 250 years of industrial society and billions of people.

Today’s global environmental crises can be pinned on no group of people or nation, and solving them will require the participation of billions of individuals. It is on this crucial level of the individual that Jacob’s actions can speak so profoundly. Jacob’s going back for two or three vessels teaches us that little things matter. In our consumer age the message has only become more relevant. We all have the potential to be truly righteous.  May we learn from Jacob’s example and come to live in a more Divine-aware and sustainable way. 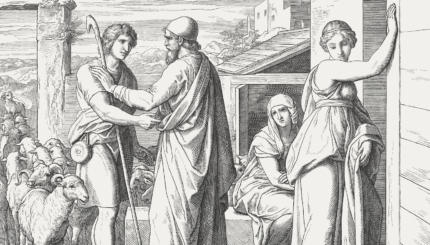 Jacob and His Two Wives

The emotional struggles of our ancestors can help guide us today. 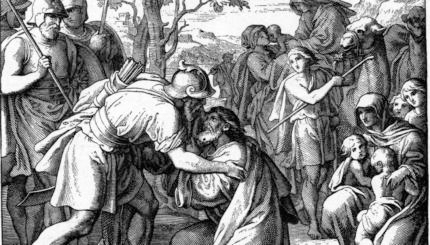 Jacob is surprised to learn that even with estranged family members, reconciliation is possible.