What we bring into our homes is as important as how we prepare it. Oddly enough, the more sophis­ticated and extensive the prepared-food industry becomes, the more cautious an Orthodox Jew must be about reading labels. Not only must we ascertain if a food is meat or dairy, but nowa­days there are preservatives and additives used in almost every type of prepared food that is on the market. Some of these addi­tives are made of dairy or meat or nonkosher by-products such as gelatin from a nonkosher animal.

A seemingly harmless little olive thrown casually into a salad could disqualify that salad for a meat meal: olives are often prepared with lactic acid, which makes them dairy, and therefore unusable with a meat meal; or shortening marked pure vegetable shortening can contain stearic acid, which is derived from nonkosher animals; or peanut but­ter, which might include a glyceride of nonkosher origin.

What is a Hechsher? What Are All Those Symbols?

So there is an art to buying kosher. The easiest way is to “let Chaim Yankel do it.” To save any hassle, some Jews will shop only in a store that sells kosher products exclusively. One doesn’t have to read fine-print labels; even the words meat, dairy, or parve are stamped in legible letters on all prepared foods.

The alternative is to buy in regular supermarkets but to check all prepared foods for the seal of rabbinic supervision. What it means is that there is a reliable independent supervisor (mash­giach), a person who is knowledgeable in laws of kashrut, who spends time at the plant overseeing the entire process, from re­ceipt of the new foodstuffs to shipment of the finished products. There are a number of registered kashrut symbols to look for. Among them are [those listed at http://www.kashrut.com/agencies/].None of these symbols should be confused with ®, which does not mean Orthodox rabbis; it means registered trademark. For reliability of the above certifications, one should check with one’s own rabbi.

In addition to the symbols above, there is the ubiquitous K. The U.S. Food and Drug Administration law permits the K to be used where there is rabbinic supervision. However, the K is no more reliable than the individual rabbi who grants it. K on some foods is fine according to Orthodox standards, but not on others. The local rabbi–or the individual–will write to the company to get the name of the supervising rabbi, and then take it from there. Within the Orthodox community there are differ­ences of opinion among rabbis as to whether K on certain break­fast cereals is adequate. Some say yes, some say no.

There is also a range of response as to what kinds of items need rabbinic supervision in the first place. Some will say anything that is packaged, for even the food containers for vegetables and fruits could contain derivatives of nonkosher monoglycerides. At the other end are those who say any uncooked product whose listed ingredients are not unkosher is okay. For most Orthodox Jews, the answer lies somewhere in between. Generally speaking, we look for rabbinic certification on all baked goods, cheeses, cake mixes, candies, desserts, puddings, breakfast cereals, dress­ings, frostings, ice creams, relishes, condiments, preserves, sauces, ground spices, pastas, canned fish, margarine, and all prepared foods (for example, French fries and soups).

The tricky things to look for in seemingly harmless foods are monoglycerides and diglycerides, shortening, gelatin, and stearic acid, which could be derived from nonkosher animals or from dairy sources. That is why rabbinic supervision is needed on so many processed foods. Happily, today there is little of any given type of food that is not available in strictly kosher form. Even kosher “bacon” (made of soybean derivatives), pareve cheese­cake, and kosher pate de fois gras. Thank God no one has come out with kosher pork. However, it must be noted that the Rabbis of the Talmud said that for every forbidden food, including pork, there is something exactly equivalent in taste that is kosher. (How did they know??)

In the medieval period, when the Jews of France were deeply involved with their non-Jewish neighbors in the wine industry, many of these laws were reexamined. Moreover, by that time the use of wine for idol worship was very rare. Thus, certain rabbinic authorities permitted Jews to deal in stam yainam, as non-Jewish wine was called. Nevertheless, the restriction on drinking still obtained, for the social reason. The Shulchan Aruch (sixteenth-century code of law) stressed that the prohibition is enforced to prevent drinking and social contact between Jews and non-Jews. This, it was felt, would lead to intermarriage.

Today, some authorities permit use of Jewish wine handled by non-Jews as long as it has been pasteurized (boiled during its production process). The reason for this is that the original pro­hibition exempted boiled wine, which was not used for libations or social drinking. On the other hand, some authorities forbid wines that are touched even by a non-Sabbath-observant Jew. Most Orthodox Jews drink only kosher wines, which are simply wines produced by Jews under rabbinic supervision. These wines are generally packaged under double seals to prevent any prohib­ited form of handling.

The prohibition extended to any by-product of grapes, such as grape juice or grape jelly. However, it did not extend to whis­key, for whiskey is a grain product; it wasn’t used for idol worship purposes, so there was nothing on which to peg a prohibition. Thus it is that there are times when Orthodox Jews drink kosher wines and regular whiskey in “mixed” company, but you won’t catch them eating pure grape candies that have no kosher label.

There is also debate as to extent of rabbinic supervision over dairy products. Most modern Orthodox Jews drink milk and use butter and creams from Gentile-owned farms that are not rabbinically supervised, because the danger that the milk comes from a nonkosher animal no longer exists. It is against U.S. law to sell as “milk” anything other than what comes from a cow. However, some Jews will drink only milk that is produced by a Jewish-owned, rabbinically supervised dairy.

On hard cheeses, however, there is little debate; the enzyme, rennet, that is used to harden cheese comes from the lining of a calf’s stomach. The enzyme is considered a meat product and may not be used together with cheese. Moreover, since it is a powerful chemical, it is considered not to be diluted, so that even a minute amount (less than one part in sixty) is still prohibited. However, some rabbis ruled that the rennet is so treated chemi­cally (isolated and purified) that it is no longer considered a meat product. Others disagree with this ruling, arguing that the rennet is not denatured in the course of preparation. Almost all Ortho­dox Jews will eat only hard cheeses (such as swiss and gouda) that are rabbinically certified. Many of the soft cheeses (cream cheese, cottage cheese) are prepared by physical separation, not rennet. In such cases, certification would not be needed. The marginal case is American cheese. Some Orthodox Jews eat American cheese without kosher labels based on the rennet rul­ing mentioned above or because much American cheese is pre­pared by nonchemical process. Most, however, insist on certification for American cheese as well, if for no other reason than to avoid a situation in which the kashrut of their home would be questionable or inadequate in the eyes of others.

Regarding bread: One of the three special mitzvot assigned to women is the law of challah, removing a token amount of dough (the size of an olive) from a yeast batter, and throwing it into the oven fires while reciting the proper blessing. This is a residual practice, symbolic of ancient Temple rites of gift offer­ings to God from nature’s bounty. The law of challah is binding only upon Jews; thus, the bread of a bakery owned by non-Jews, whose products are kosher and have rabbinic supervision, does not require challah to be taken. A Jewish-owned and rabbinically supervised bakery will take challah as will a woman or man bak­ing bread at home.

One of the bonuses of living in an intensive Jewish neighbor­hood is the presence not only of a kosher bakery but of a Sabbath observant (shomer Shabbat) one as well. This means the owners are personally observant of halacha. Accordingly, they close the bakery before sundown Friday and don’t reopen until early Sunday morning. There is never any worry whether or not challah was taken or whether Sunday morning’s bread or Monday morn­ing’s cookies were baked by another Jew on Shabbat (which would not be permitted).

The author’s list of symbols of approved kashrut laboratories has been replaced with a hyperlink to a more up-to-date list, for which the author is not responsible. Reprinted with permission from How to Run a Traditional Jewish Household, published by Simon & Schuster. 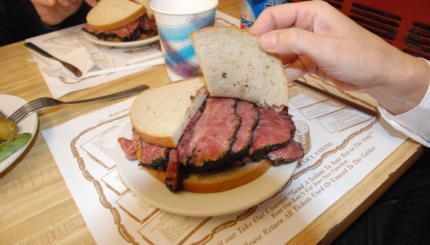 What is Kosher Style?

Kosher style foods are not strictly kosher, but beyond that the meaning is ambiguous. 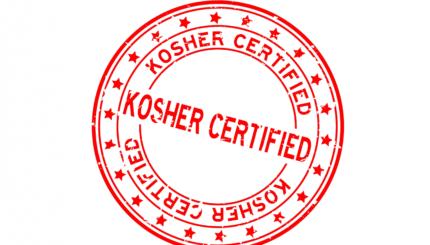 Blessing food does not make it kosher, nor is food that has not been blessed necessarily unkosher.