Our rabbis tell us that in every generation, each person should consider himself or herself as having personally received the Torah on Mount Sinai. One of the highlights of the Shavuot morning service is the ritual for taking out the Torah.

In the second scroll, we read Numbers 28:26-31, which tells of the special sacrificial offerings for Shavuot in biblical times. [The second scroll is not read in Reform congregations.] The haftarah for the first day of Shavuot is Ezekiel 1:1-28, 3:12, which contains the prophet’s most astounding vision of God. Ezekiel describes a remarkable vision of God. He sees a Divine Throne-Chariot, whose main feature is a group of four-faced living creatures. His appearance of a manifestation of God connects the haftarahto the Torah reading, where God reveals His will at Mount Sinai.

The reading for the second day of Shavuot is Deuteronomy 15:19-16:17, which deals with the laws of tithing, release of debts in the seventh year, the release of slaves every seventh year, and a detailed description of the three pilgrimage festivals of Passover, Shavuot, and Sukkot.

In the haftarah, from the Book of Habakkuk 2:20-3:19, Habakkuk pleads with God to intervene on behalf of his people. He visualizes his petition as granted in a graphic picture of the march of God and God’s retinue to overthrow the enemy. As in the case of the haftarahfor the first day of Shavuot, this haftarah too is a description of a manifestation of God. For this reason, and because the language in places recalls the revelation at Sinai, it was chosen as the haftarah for the second day of Shavuot.

The Yizkor memorial prayer service takes place on the second day of Shavuot in traditional synagogue settings, and in [most] Reform synagogues and in some Reconstructionist synagogues on the first and only day of Shavuot. 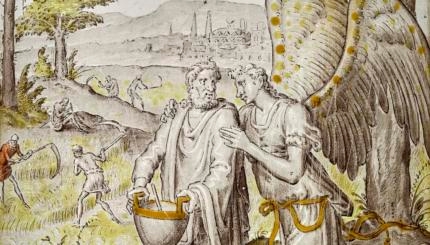 The Lesson of Habakkuk

An interpretation of this reading explains why Israel received God's revelation.