The panoramic poetry of Ha’azinu embraces all of the Jewish past, present and future. Israel is warned that sin will be punished through the scourge of the other nations, but that Hashem will never completely abandon His Chosen People. Rather than referring to specific incidents, the poem’s use of the imperfect tense alludes to repeated events, thus making it supra-historic–beyond the limits of history.

The multiple layers of meaning in Ha’azinu invite a variety of interpretations. The following is one such example (Deuteronomy 32:18):

Although the second part of the verse is the subject of some discussion by the commentaries, a straightforward translation is possible:

This speaks of how the Children of Israel, unmindful that they are indebted to Hashem for their very existence, forget Him and embrace any of the various "new gods" that each era generates. The imagery is reminiscent of a child who neglects his parent. Time and again, we have been guilty of this type of ingratitude.

tzur, usually understood as "rock," is often identified with Hashem, the Rock of existence; it would then parallel e-l (G-d) in the second half of the verse.

The Sifrei (Tannaitic legal commentary) and Ibn-Ezra (12th century Spain), however, quote the verse from Isaiah 51:1, "look to the rock from which you were quarried," there, tzur refers to the Patriarchs. According to this interpretation, the people first ignore their noble origins, and this leads to forgetting Hashem.

Most commentaries, starting with Rashi and Ibn-Ezra, say that tav-shin-yud derives from the root word noon-shin-hei, which means "to forget" or "to release." Both the noon and the hei are weak letters grammatically and drop out, the hei in this case replaced by a yud. Ibn-Ezra gives other examples of this kind of substitution: tav is the prefix for the second person in the imperfect tense. The resultant word, t’shi, becomes teshi.

For examples of noon-shin-hei, we might compare Jeremiah 23:39 and Genesis 41:51, where Haketav V’hakabbalah (Yaakov Tzvi Mecklenburg, 1785-1865), explains that this verb means "to loosen one’s focus on an idea," which is followed by forgetting (shin-chaf-chet, as in vatishkach). Thus, our verse charts a downward course, in which the people first allow themselves to be distracted from Hashem, and then they forget Him entirely.

Hirsch does not accept Ibn-Ezra’s grammatical analysis, especially because the loss of the noon should result in the addition of a dagesh (dot) in the shin. Thus, he posits a different root for teshi, shin-yud-hei, which he connects with shai, a gift of allegiance. Hirsch’s translation thus reads:

The Rock had hardly brought you into the world,

And you gave your allegiance–offering to others,

And forgot G-d while He is still forming you.

Haketav V’hakabbalah cites R. Wolf Heidenheim (1757-1832), who agrees that the root here is shin-yud-hei. Unlike Hirsch however, he classifies this root with others in which the shin is dominant, surrounded by other weak letters (such as noon, yud and hei). The prevalent idea in all of these is "to relinquish," so the reading of the first part of the verse is parallel to the second:

The Rock Who bore you, you ignored/ and you forgot G-d Who produced you.

A radically different approach, found in the Midrash (Sifrei, Bamidbar Rabbah) and quoted by Rashi, is to regard the tav of teshi as part of the root, rather than the prefix for the second person in the imperfect tense. The word would thus be based on tav-shin-shin (a word which does not otherwise appear in Tanach), meaning "to weaken." Two possible interpretations, which do not view the verse as structured chiastically, follow:

The Rock bore you, weak one; but you forgot G-d Who produced you.

2. Rashi, quoting the midrashim above, explains that the Children of Israel weakened the power of Hashem by forgetting Him: whenever Hashem begins to benefit them, they anger Him through their infidelities, "weakening" His power. The Sifrei cites two examples of Israel’s fickleness: After the splitting of the Sea, the people sang praise and thanks to Him, but soon thereafter they complained, "Why have you taken us out of Egypt?" (Exodus 17:3); and, at Sinai, the people pledged their complete loyalty to Hashem, yet forty days later they built the golden calf.

The most difficult aspect of this last interpretation is the notion that the people can weaken the power of Hashem. Yehudah Loew ben Betzalel, known as the Maharal of Prague (c. 1525-1609), in his commentary on Rashi, Gur Aryeh, notes that it is not Hashem Himself Who is weakened, G-d forbid, since that is impossible; rather, the effect of His power is weakened by their sins. Although Hashem desires to give, if those meant to receive are unfit, then His power–meaning His manifestation in the physical world–is not realized. This, concludes the Maharal, is a very marvelous notion.

And so it is. If by not being suited to receive Hashem’s goodness, we are able to diminish the degree to which He is apparent in the world, then the converse must also be true. When we obey Him, He bestows of His bounty, and we become His partners in perfecting the universe. 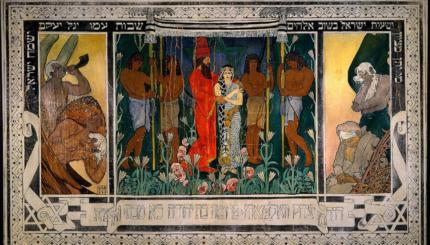 The commandment to rebuke one another teaches the importance of mutual responsibility.