In a midrashic anecdote, the Roman Governor of Palestine, Turnus Rufus, asks Rabbi Akiba: “If God dislikes a man having a foreskin, why did He create him with one in the first place?” This is a serious question to the logical Roman mind and one echoed by early Christians. Akiba replies that God has created an incomplete world, leaving human beings to bring it to greater perfection.

Jewish teach­ing rejects the idea, put forward by those hostile to airplanes, that if God wanted men to fly He would have provided them with wings. The rite of circumcision is seen as the removal by man of an appendage to his body for which there is no purpose except its re­moval as a symbol of total obedience to God’s will. Jewish teachers were not unaware that other peoples had circumcision rites but saw the Jewish rite, as the Bible states, as the special sign of the covenant with Abraham.

Wide­spread though the rite may have been in some ancient cultures, it became the distinguishing mark of the Jew, especially since many of the peoples surrounding the people of Israel did not practice circumcision. The Philistines and others are described in the Bible with abhor­rence as the uncircumcised.

The medieval Jewish philosophers, with their strong rationalizing tendencies, were moved to ask why, granted that circumcision is a sign of the covenant, the sign had to be on this par­ticular organ of the body. Maimonides (Guide of the Perplexed, 3.49) advances two reasons. The first (which Maimonides considers to be the best) is that circumcision weakens, without actually harming, the organ of generation so that the sexual desires of the circumcised man are moderated. (Maimonides, more than any other medieval Jewish thinker, had an aver­sion to sex.) The bodily injury caused to that organ, he says, does not interrupt any vital function, nor does it destroy the power of gen­eration, but it does counteract excessive lust.

Maimonides’ second reason is that the sign of the covenant had to be in that particular organ in order to prevent those who did not believe in the unity of God claiming to be members of the covenant for reasons of their own. The opera­tion is so difficult and so disagreeable that no one would undergo it unless he sincerely wished to belong to the people of faith. Philo of Alexandria was the first to advance the hygienic reason.The foreskin is literally un­clean and can be a cause of disease. The more usual reason given by Jewish thinkers is the obvious one that the sign of the covenant through all the generations has to be in the very organ of generation. But, whatever the origin and the reasons for the practice, faithful Jews have circumcised their male children as the most distinctive sign of their loyalty to God. Even Spinoza [the unorthodox 17th-century Dutch Jewish thinker] can remark: “Such great impor­tance do I attach to the sign of the Covenant, that I am persuaded that it is sufficient by itself to maintain the separate existence of the nation for ever.”

Excerpted with permission from The Jewish Religion: A Companion, Oxford University Press. 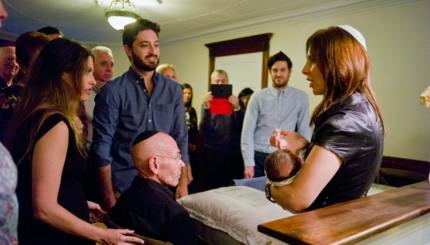 Why the Minyan? Community and Brit Milah

The customary quorum of 10 represents the community and its obligations to the child.