Parashat Toldot uses the search for water as the basis for a profound lesson about grief and death. In the previous Torah portion, we learn about Abraham’s hostile encounter with Avimelech, the ruler of Gerar, an area scholars believe is located in what is now southern Israel. Abraham and Avimelech have a dispute over water rights after Avimelech’s servants seize a well that Abraham had dug. Though few of us today are shepherds, it’s not hard to understand the significance of a fight over water in the arid Middle East.

After Abraham dies, his son, Isaac, has a similar encounter with Avimelech, who banishes him from his territory, fearing Isaac’s prosperity and strength. Isaac tries several times to locate a well that is safe from attacks by Avimelech’s shepherds, but these efforts are not merely attempts to locate a defensible water source. The Torah explicitly hints that his struggle is also about his search for identity after the death of his father.

Our first clue comes in Genesis 26:18: “Isaac dug anew the wells which had been dug in the days of his father Abraham and which the Philistines had stopped up after Abraham’s death, and he gave them the same names that his father had given them.” Reopening Abraham’s wells and restoring their names is Isaac’s effort to effectively replicate what his father had done. Isaac doesn’t understand yet that he cannot become his father. He must instead grow into the person he alone has the potential to become.

Isaac and his shepherds continue digging for water and find two new sources, but Avimelech’s shepherds contest these too. Isaac names the new wells esek (strife) and sitnah (contention), names that express his ongoing struggle, both with Avimelech and within himself. These names clearly indicate the inner turmoil Isaac is experiencing along his journey of loss and his struggle to establish his own unique identity. To escape this state of strife and confusion, Isaac must continue digging new wells.

Despite the setbacks, he does. Digging again, he finds a new water source, naming it rechovot (literally, space or distance). Isaac doesn’t only put physical distance between himself and Avimelech, but emotional and spiritual space between himself and his father. Naming the new well rechovot symbolizes that he is no longer struggling to become Abraham, but is on his way to establishing himself as an independent man.

On the surface, Isaac’s struggle to establish secure water rights reads like a contemporary dispute between two nations experiencing a drought. But the Torah suggests a deeper meaning to this struggle. Isaac’s story is one of confusion and the search for identity in the wake of loss. It is a journey from uncertainty to discovery, from depletion to renewal of spiritual and emotional resources. The story of Isaac reminds us that losing a loved one initially depletes us. But by digging over and over into the innermost wells of spirit, we flow again into the stream of life and in the process find ways to honor both the ones we have lost and the unique people we are becoming.

This article initially appeared in My Jewish Learning’s Reading Torah Through Grief newsletter on Nov. 25, 2022. To sign up to receive this newsletter each week in your inbox, click here.

Two Israelis were stabbed last week, Israeli military and police response has continued, and leaders within Fatah have begun talking ... 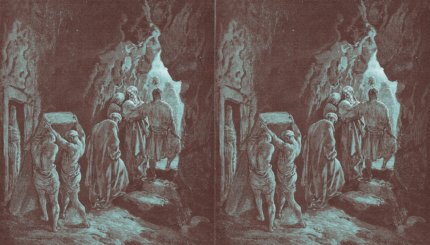 The Torah urges us to remember the years of strength and virtue whenever possible.

In this portion, children fall into the unfortunate trap of repeating their parents' mistakes.