In Genesis, God looked at all that God created and saw that it was very good (Genesis 1:31). Since then, the vast diversity of life on the planet has not gone unnoticed by Jewish Sages. Explicitly because the Torah ascribes God’s intention as well as God’s satisfaction with the existence of every life form, our rabbis were moved to derive a deep lesson.

The Midrash (Exodus Rabbah 10:1) notes in the name of Rabi Acha bar Rabbi Hanina: “Everything you see as superfluous in this world–like snakes and scorpions–are part of the greater scheme of the creation of the world.”

Though most of us are used to a Torah that calls certain categories of animals “not kosher” or “impure,” we see from this that, surprisingly, the Torah outlook is actually one of respect and recognition for all creatures. The consequences of such an outlook have important ramifications for biodiversity issues today.

The biodiversity of planet earth is severely endangered. Edward O. Wilson, a Harvard University zoologist, estimates that “If we continue at the current rate of deforestation and destruction of major ecosystems like rainforests and coral reefs, where most of the biodiversity is concentrated, we will surely lose more than half of all the species of plants and animals on earth by the end of the 21st century.”

Humans benefit from biodiversity in immeasurable ways. For example, many of our most potent medicines come from the plants and animals that God put on this earth: Aspirin from the willow tree; digitalin from the foxglove plant; vincristine, taken from the rosy periwinkle of Madagascar and used to treat childhood leukemia; painkillers from cone snails, snake venom, and frog skin poison.  What if the willow tree had gone extinct? What if the rosy periwinkle had disappeared?

In addition, the wide variety of plant and animal life allows humans to globally nourish and sustain themselves in several different climates. No less important, the splendid sight of differing flora and fauna expands the mind and delights the senses. Billions of dollars are spent each year on tourism to spots with breathtaking views and ‘exotic’ wildlife such as safaris, coral reefs, and rain forests.

God saw the good in all that God created. And God gave a series of commandments to the Jewish people intended to ensure that man was a proper steward of that which God had created. In this week’s Torah portion, Emor, God gives the Jewish people a mitzvah (commandment) that is instructive to today’s problem. God prohibits the slaughter of a mother and its calf on the same day–a prohibition often referred to as “Oto V’et Beno (Leviticus 22:28).”

Nahmanides, in his commentary on this prohibition, indicates that the reason for the prohibition is that God is telling us not to eliminate a species. He offers the same comment on the biblical commandment to send away the mother bird before taking eggs from a nest found in the wild (Deuteronomy 22:6).

Other Torah commandments also imply limits to humankind’s effect on the natural world. For example, God prohibits us from breeding two species of animals together, and from grafting plant species together (Leviticus 19:19): “You will keep my laws; you will not breed your animals as kilayim [the junction of two inappropriate things], you shall not seed your fields as kilayim.”

Here too is proof that though we are expected to cultivate natural species for our benefit and sustenance, we are not to permanently affect those species’ essential identities.

To underscore the importance of all things God created, the Midrash (Ben Sira 23b, Otzar Midrashim 47) tells the story of King David, one of the most intelligent men in Jewish history, who as a young boy once asked for what purpose God created spiders on this earth. God answered that there would come a day when King David would need a spider and then he would thank God for creating the spider.

Many years later, when David incurred the wrath of King Saul, and was on the run from Saul’s soldiers, David escaped into a cave to hide. He heard the soldiers near the cave and knew they would find him. Suddenly a big spider appeared in front of the cave, and spun a web across the opening. When the soldiers came they did not look in David’s cave, because they assumed that he would have torn the web when he entered the cave. David’s life was saved by a spider, and on that day, David understood that God was wise, and thanked God for creating all creatures.

David’s realization no doubt was that if the actions of one spider in a few seconds can determine the life and death of one person, then hundreds of spider species worldwide must surely have a tremendous impact on everything.

Today scientists have begun to discuss biodiversity in terms of “webs.” What used to be called the ‘food chain’  is now called the ‘food web’ because the amount of cross-links makes the whole thing more properly resemble a web than a simple linear chain.

As we begin to understand how much more complicated and involved relationships between organisms are than what was thought, cause and effect are no longer unidirectional or even bi-directional, but can be circular, recursive, and be described by many different mathematical models.

The more we learn about biodiversity, the more we begin to see its overall importance in strengthening every kind of ecosystem against disturbances. Diversity brings stability to an ecosystem because the more species diversity that exists, the more possible adaptations and therefore the higher chance that more variations will persist as time goes on.

David began to understand this lesson when he saw the spider weaving a protective web across the cave, sheltering him from damaging intrusions. So too, in every ecosystem each species is responsible for its own part of the “web” that can support boundaries in the system against intrusions.

We have a far greater understanding today of the importance of every living thing. Each of us is required, on both a personal and religious level, to take actions that reduce our impact on our ecosystems.

The two Torah commandments that directly apply to species diversity might be rare to come by. After all, how often do we see a bird hovering over eggs in its nest and how often are we in charge of which cows get ritually slaughtered?

While most of us do not have the opportunity to perform many of the mitzvot related to species preservation, we cannot fool ourselves into thinking that species diversity preservation is beyond our reach. We can each take actions in our everyday lives to protect the earth’s biodiversity, and adhere to God’s general commandment to honor the importance of all that God has created.

1. Reduce your use of pesticides and fertilizers in lawn care. These often run off of lawns into adjacent lakes and streams with adverse effects for the plants and animals living there. Click here and here for lawn care advice

3. Purchase sustainably harvested seafood. Many seafood, though delicious, are not harvested sustainably,
either for the individual species itself or for those species that are unlucky enough to be ensnared as “by catch.” Some trawlers destroy extensive seafloor habitat in the process of catching fish. See the Monterey Bay Aquarium Seafood Watchfor a better understanding of how your favorite seafood fares. 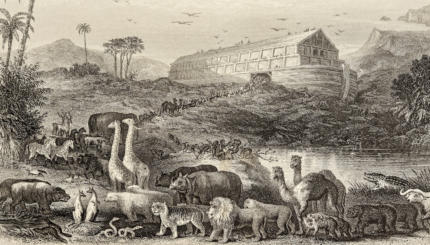 Protecting Biodiversity: A Covenant With Every Living Thing

The importance of protecting biodiversity both for our survival and for our appreciation of God's presence in the world and the order of creation.

Jews need to put environmental issues higher on their agenda, the author argues.

An obligation of responsibility for this generation and the next.