Reprinted with permission of the author from On Being a Jew, published by The Johns Hopkins University Press. The book takes the form of a series of dialogues between Albert Abbadi, an older observant Jew, and graduate student Judd Lewis, for whom Abbadi explains and interprets Jewish observance.

AA: I think holiness and purity really have a central role in our religion, even if, nowadays, the Temple itself, formerly the principle focus of these matters, is missing from our lives. The great power our kosher laws have on us–sometimes even when other things have been left to slide–bespeaks something deep within our hearts, perhaps not consciously articulated by most Jews, a desire connected to kedushah [holiness], be it expressed only in so humble a form as adherence to the kosher rules.

AA: Well, to begin with, you have to get some of the physical sense of purity and holiness, or rather–since the feeling itself may be known to you–come to understand this feeling as part of what is meant by kadosh [holy]. You see, kadosh was, and is, primarily a physical concept. When something was kadosh it had to be protected from physical contact with impurities, and when you yourself fell into a state of impurity you could become pure again not by reciting some prayer, but only by immersing your body in a mikveh, a bath or stream of running water. Similarly, when the Levites were consecrated for service in the Temple, they were not only sprinkled with waters of purification but, strikingly, shaved all over their body, a physical starting anew; then their clothes were washed and they were made pure.

There is something similarly physical, I think, about kashrut. That is why I said I thought a vegetarian might understand. Because instead of just eating whatever comes within your grasp, there are certain rules and distinctions that guide you, so that the very act of eating becomes changed as a result, isn’t it so? In a sense, submitting to this regime purifies one’s insides in the same way that a bath purifies one’s skin, and that physical feeling of purity is unmistakable. As a matter or fact, it is precisely the threat of contracting impurity–in the days of the Temple, by coming into contact with some source of impurity, or with regard to kashrut, by swallowing some impure substance–that causes one to acquire a sort of self-awareness, even vigilance, as one goes through life, even if, in the course of time, this feeling must become rather routine and second nature. So it seems to me that our zeal for kashrut is likewise ultimately a physical thing, or rather, that the combination of concrete physicality with things non-physical that is the essence of kedushah.

Jewish dietary laws are observed in varying degrees among Jewish families and individuals. 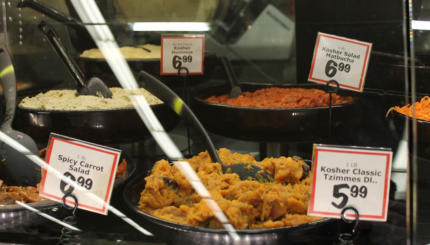