The parallel themes of homelessness and wandering pervade the Bible and Jewish history. In the first chapters of the book of Genesis, Adam and Eve are expelled from the Garden of Eden. Abraham begins his relationship with God by leaving his native land, and Jacob and his sons leave their own home to go down to Egypt. After the Exodus, the Israelites journey through the wilderness, homeless, for 40 years. The destruction of the first Temple in Jerusalem is followed by 70 years of exile, and the destruction of the second Temple in 70 C.E. is followed by two millennia of national homelessness, which ended only with the establishment of the State of Israel in 1948.

It is no wonder, then, that Jewish law (halakhah) attempts to guarantee housing stability. Though powerless to grant the Jewish people a permanent home, halakhah can at least help to assure individual members a stable place to live.

A few Jewish sources explicitly speak of the provision of housing as a means of tzedakah (charity). Most famous among these texts is the exhortation in Isaiah to “take the poor into your homes,” read as the Haftarah on Yom Kippur.  This prophetic cry defines the relief of homelessness as a religious duty, preferable to fasts, sacrifices, and other ritual observances.

Other texts specifically define housing as one of the obligatory types of tzedakah. The Bible commands that a poor person be granted “sufficient for what lacks, according to what is lacking to him.” One talmudic text understands each phrase in that command as referring to a specific type of assistance one might grant a poor person: “‘Sufficient for what he lacks’–this is a house. ‘What is lacking’–this is a bed and table.” Significantly, this text imagines the primary needs of a poor person as being related to housing.

The majority of rabbinic and medieval texts describing tzedakah, however, focus on the obligation to provide food for the poor. This emphasis on food may reflect a reality in which, in contrast to the contemporary situation, food was expensive and housing was cheap. One mishnah even comments that a poor person should not be obligated to sell his or her house before being allowed to qualify for tzedakah.

From our vantage point, it seems surprising that a poor person would have a home but would not have sufficient food. However, whether out of ideology or economic reality, this text and others assume that no matter how poor a person might be, he or she is at least adequately housed.

While Jewish law does not specifically offer a definition of adequate housing, we can infer much about a Jewish definition of a house from the laws regarding the sukkah, a temporary structure constructed for the weeklong holiday of Sukkot. In establishing laws governing the construction of a sukkah, the rabbis of the Talmud go to great lengths to define the conditions under which a house might be considered temporary.

It is reasonable, then, to assume that the characteristics that would make a house too permanent to qualify as a sukkah tell us something about the rabbinic definition of permanent housing.

The sukkah, the rabbis tell us, must be stable enough to be lived in for a week, but sufficiently unstable that it can not be mistaken for a permanent house. Opinions differ about what would make a structure too permanent to qualify as a sukkah–some consider the deciding factor to be height, while others focus on the types of building materials used. While precise definitions vary, all sources consider a structure to be too permanent for a sukkah if it would appear to a passerby as sufficiently stable to house a person for the entire year, and not only for a single week.

While temporary, the sukkah must be stable enough to serve as housing for the week. During the holiday of Sukkot, a person is supposed to “eat, drink and sleep in the sukkah… and bring one’s nice dishes into the sukkah” (Talmud, Tractate Sukkah 28b). Permanence, according to this text, is conveyed by the ability to live a full and dignified life within the sukkah for the duration of the holiday.

From this discussion of the sukkah, we can infer that permanent housing should allow a person to live a full and dignified life year-round, and not only for a week. Furthermore, permanent housing, unlike a sukkah, should look permanent. That is, it should be stable enough that anyone would recognize it as a place in which a person might live indefinitely. In the contemporary context, we might consider whether a homeless shelter or transitional housing would meet these criteria of being a place in which people can live with dignity for an indefinite period of time.

Jewish law does not explicitly discuss the mechanism by which we provide permanent housing to the poor, but simply assumes that, in a functional society, the poor have stable housing. The question for us might be: What is the most effective way for us to create the society envisioned by Jewish law? Charitable donations to organizations that help house the homeless are one obvious way. Donating to or participating in community-based efforts to construct affordable housing or direct assistance to homeless or inadequately-housed families can help reduce some of the housing burden.

But with a problem this large and complex, a more effective means of working to end homelessness might be political action, advocating for governmental policies and programs that provide housing to those in need and/or give people the means to afford housing on their own.

In addition to suggesting some criteria for permanent housing, Jewish law offers much insight into the ideal landlord-tenant relationship. As in the discussion of the parameters of a sukkah, the primary concern in laws regarding landlord-tenant relations seems to be the question of permanence. Landlords are forbidden from evicting tenants without due warning, and may not evict tenants during the winter months, when new housing will be hard to find.  According to Moses Maimonides, a landlord must give the tenant sufficient notice before terminating a lease “so that [the tenant] can look for another place and will not be abandoned in the street” (Mishneh Torah, Hilkhot S’khirut 6:7). The landlord, Maimonides suggests, will be held responsible if a tenant becomes homeless as the result of eviction.

In addition to protecting tenants from premature eviction, Jewish law requires landlords to keep rented units habitable. Landlords are required to fix doors, windows, and ceilings, and to perform other repairs generally done by specialists. At least one authority emphasizes that it is the tenant, and not the landlord, who determines what repairs the home needs. According to the Tur (Jacob ben Asher, a 14th century sage)the landlord must fix broken windows “if the tenant needs light…even if there is a lot of light (Hoshen Mishpat 314:1). The landlord, in other words, cannot refuse to repair the windows based on his or her assessment that the house does not need more light.

While Jewish laws does place some demands on tenants, including requiring the tenants to give the landlord sufficient notice before ending a lease, and doing basic home repairs such as affixing a mezuzah, the bulk of the responsibility remains with the landlord. Tenants, Jewish law suggests, are a class in need of protection, and whose safety and security depends on the landlords.

Jewish law offers a number of criteria for evaluating the condition of housing and a number of suggestions about the responsibility to ensure that the poor have adequate housing. Central to all of these laws is a concern that housing be safe, secure, and permanent, and that every home allow its inhabitants to live a full and dignified life. 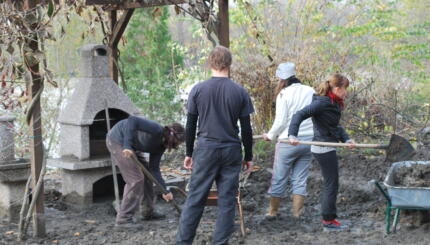