Education in Muslim countries, where the majority of Jews lived in the medieval period, included not only Hebrew, Bible, and Talmud but also the whole range of secular learning and even religious subjects (the Koran, at least) studied by Muslim pupils. Jewish children learned either in a school attached to, or part of, the synagogue or in a private schoolwhich was often the house or rented room of a teacher. Parents paid tuition, which was a major ex­pense, and the community paid for the education of orphans and poor children.

With regard to customs previously mentioned as to the beginning of biblical instruction, age of instruction, and so on, these gen­erally applied also in Jewish communities in Muslim countries. Private letters from the Cairo Genizah show that most common people in Egypt and North Africa had their sons educated at least until the age of thirteen, and Arabic as well as Hebrew reading and writing ability was a standard part of that education. [A genizah is a place where unusable sacred writings were stored in order to preserve them from desecration.] One father wrote to his wife: "We are not honored by the peoples [Gentiles] except by rea­son of knowledge and what has been established in our memories from childhood … except for knowl­edge, a man is not worth a penny, even if he comes from a distinguished family or from heads of the academies … let no one belittle the merit of the teacher for he works very hard".

Hebrew writing was also an important part of the educational process, and in fact students wrote “collections”  (mahberot) containing the weekly biblical ­readings that they learned, rather than learning from complete texts of the Bible. Children were

taught first the "alef‑bet” [alphabet] and then reading and writing combinations of letters with vowels. One document [from the genizah] has a writing game for children, in which the letters were given different colors and the teacher wrote the outlines of the letters that the child was to fill in with the correct color (the first coloring book in history?). Another had drawings of snakes with an­imal heads, the Star of David, and other symbols. Later, students in yeshivot [academies] also wrote summaries of what they studied and novellae of their own, just as was the custom in the French and German yeshivot.

Mathematics was learned often even before the student began lessons in writing. Of course, this study was in Arabic, since the first mathematics and astronomy in Hebrew were those of Abraham b. Hayya (ca. 1065‑ca. 1136) in northern Spain. [Abraham bar Hayya was among the first and most important of the medieval Jewish mathematicians and scientists. He lived and wrote in Barcelona.]

As noted elsewhere here in articles dealing with Muslim communities, Jews in these countries mas­tered Arabic very soon after the Muslim conquests; in many cases they knew Arabic better than the indige­nous converts to Islam. Jewish boys were allowed to study Arabic, and in many cases even Qu’ran, together with Muslim boys (In many Muslim cities the school was attached to the mosque, just as the Jewish school was to the synagogue; but in other places instruction was in the home of a teacher or even in the marketplace or street).

Curiosity about the great body of scientific and philosophical knowledge avail­able in the Muslim world soon led to a desire among Jews to acquire this knowledge. To that end, Jewish boys also studied, again together with Muslims, the secular sciences. These included mathematics (alge­bra and geometry, Euclidean and non‑Euclidean, trigonometry, and later, rudimentary calculus), physics, optics, philosophy (ethics, theories of the soul, meta­physics; primarily Aristotelian philosophy and then increasingly the works of the great Muslim philoso­phers), music (theory), astronomy, and medicine. Following in the footsteps of Muslim philosophers, Jewish writers in the Muslim world… wrote on the “classification of sciences,” in reality an out­line of the education curriculum here described.

These secular subjects, many of which today would be considered "advanced" study (if learned at all), were mastered by the age of eighteen or even earlier. The young pupil would learn each subject from a scholar who was a specialist in that area, and this usu­ally necessitated travel to distant cities and even to other lands to learn with the greatest authorities. Maimonides himself, we know, as a youth learned as­tronomy with students of the greatest astronomer in Muslim Spain, Ibn Aflah of Seville. [Maimonides (1138-1204) is generally acknowledged to be the greatest Jewish thinker, Talmudist, and codifier in the Middle Ages.] The student would receive a kind of diploma at the conclusion of his studies with each scholar, listing the books he had mastered and attesting to his proficiency.

Just as in other lands, Jewish students, of course, were expected to learn the Bible, but also midrash and the Talmud, the growing literature of responsa of the geonim(written originally in Arabic and only gradually translated into Hebrew), and such legal compendia as the great work of Isaac al‑Fasi. [The geonim were heads of the yeshivot (academies) in the post-talmudic period.]

With the revival, or more correctly the invention, of He­brew grammar in the tenth century and later, first in Fez in North Africa and then definitively in Muslim Spain, students also applied themselves diligently to mastery of grammar and proper Hebrew composi­tion. At least in Muslim Spain, but probably also in Egypt and Yemen (where Hebrew poetry was highly regarded), young boys also were required to be expert in Hebrew as well as Arabic poetry. Indeed, we have Hebrew poetry composed by poets in adolescence, including Judah ha-Levy, Ibn Gabirol, and others.

What about the education of Jewish girls?

There is really no information on the education of Jewish girls in Muslim lands, although it is known that Muslim girls often received formal education, and some became important poets. There is extant only some Arabic poetry by Jewish women in Mus­lim Spain, and mention of the names of a few others in Arabic sources. Legend ascribes a Hebrew poem to the daughter of Judah ha‑Levy, but this is likely a myth. We know of no Jewish women who were scholars in Muslim or Christian Spain, such as the few mentioned in Germany and elsewhere. Women did, however, play an active role in hiring teachers for their sons and even in endowing schools, particularly in Spain.

Older boys usually went on to study the Talmud in established yeshivot, just as in European countries. The most famous, of course, were the great acade­mies in "Babylon” (Iraq), where the Talmud itself had been composed, and which continued under the leadership of the geonim until the end of the eleventh century.

Other famous schools included those of Qayrawan in North Africa, another later at Fez, and Fustat and Alexandria in Egypt. Goitein has mentioned the frequent travel by scholars from one to the other of such yeshivot, and even from country to country. [Shlomo D. Goitein, a historian of  medieval Mediterranean society.] We find French rabbis in yeshivot in Muslim lands, as well as in Egypt and Baghdad. Indeed, the yeshivahof Qayrawan was established in the tenth century by a scholar from Italy. In al‑Andalus in Spain, the ­yeshivot first at Lucena and then Cordoba‑­Granada won international renown. La­ter in Christian Spain, of course, there were numerous outstanding yeshivot headed by famous scholars.

The learned merchant was the standard bearer of medieval Islamic civilization--and this was good for the Jews. 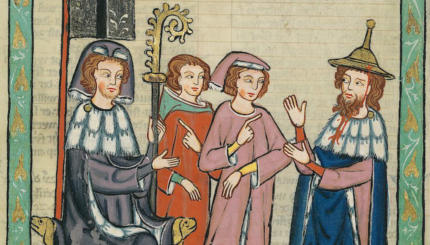