Jeroboam I, born in the town of Zereda of the tribe of Ephraim, was the first king of Israel, the northern kingdom, after the division of the kingdom. When Jeroboam was young, his father, Nebat, died, and he was raised by his widowed mother, Zeruah. His bravery and industriousness caught the eye of King Solomon who put him in charge of the labor forces of the tribes of Ephraim and Manasseh, which had been conscripted to help fortify Jerusalem.

His work gave him the opportunity to realize that the tribes in the north, jealous of Judah’s dominant position, were restless and unhappy with the Jerusalem royal court because of Solomon’s heavy taxes and the compulsory labor burdens, which were imposed to carry out the king’s ambitious building projects.

In one of his journeys outside Jerusalem, Jeroboam met the prophet Ahijah–a priest serving in the sanctuary of Shiloh in the territory of Ephraim–on an isolated road. The prophet rented his coat in 12 pieces, giving ten to Jeroboam. The prophet said that God was giving Jeroboam ten tribes and leaving only two to the descendants of King David.

Jeroboam, aided by Ahijah, plotted against the king. Solomon discovered the conspiracy and condemned Jeroboam to death. Before the sentence could be carried out, Jeroboam fled to Egypt, where the Pharaoh Shishak gave him political asylum.

After Solomon died, Rehoboam, his son and successor, went to Shechem to be confirmed as king by the ten northern tribes. Jeroboam, who had returned to Israel as soon as he heard that Solomon had died, complained to Rehoboam, in front of the assembled people, about the forced labor and high taxes imposed by his late father, and asked him to lighten the burden of the people.

Rehoboam promised to give his answer in three days, after consultations with his advisers. The elders recommended that he reach a compromise with his northern subjects concerning their justified complaints. The king rejected their wise advice and consulted with his young advisers, who told him to be firm in his demands.

their burden but he would increase it! The reaction of the people should not have come as a surprise to Rehoboam. The northerners, discontented and rebellious, declared that they were seceding and stoned to death Adoram, the official in charge of the forced labor. Rehoboam, fearing that he would also be killed, mounted his chariot and fled to Jerusalem.

The Kingdom of Israel

The northern tribes established an independent kingdom called Israel, and Jeroboam was their sovereign. The new king resided at first in Shechem; then for a period in Penuel, across the Jordan River; and finally in Tirzah, a town about 12 kilometers northeast of Shechem, which became his capital.

Jeroboam’s basic policy was to separate Israel completely from Judah. For that reason, he played down the importance of Solomon’s Temple and instead revived the old sanctuaries at Beth-el, in the south of his country, and at Dan, in the north, setting up golden calves in them. He expelled the priestly Levites, who were loyal to the kingdom of Judah, and recruited in their stead priests from the common people, whom he personally appointed and ordained.

There was constant war between the kingdoms of Israel and Judah during his reign. Jeroboam established a religious holiday on the 15th day of the eighth month. On that day, he would go to Beth-el and sacrifice on the altar to the golden calf. On one of those occasions, a prophet of the tribe of Judah saw Jeroboam burning incense in the altar and prophesied that one day a king by the name of Josiah would destroy that altar.

Jeroboam pointed with his arm to the man and ordered his men to seize him. His arm became paralyzed, and he could not move it. The altar broke down, and its ashes were spilled.

Sometime later, Abijah, the young son of Jeroboam, became very ill. The king sent his wife in disguise to Shiloh to consult with the prophet Ahijah, who was now old and blind, to ask whether the child would recover.

Despite his blindness and the queen’s disguise, the old prophet recognized her and told her that the child would die as soon as she returned to Tirzah, as God’s punishment for having sinned and worshiped idols. Ahijah added that Jeroboam’s descendants would die and be eaten by dogs and birds. Iddo, the seer, also had visions about Jeroboam, which he wrote in a book that has not survived to modern times.

Jeroboam died after reigning for 22 years and was succeeded by his son Nadab, who was overthrown and killed by Baasha two years later.

The King of Judah fought off Assyrian attacks. 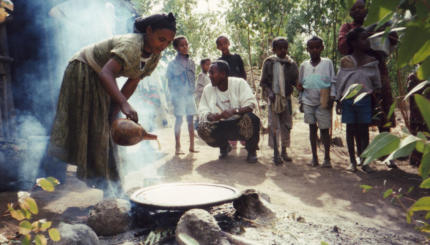