Mazel tov (congratulations) on your upcoming wedding! If you’ve decided to include a ketubah or Jewish marriage contract as part of your wedding, you have myriad options. Here is a brief guide of things to consider as you select the one that’s right for you and your partner.

While some ketubot (the plural of ketubah) are stunning works of art, the most important part of any ketubah is what it says. After all, you and your partner will be signing this document and affirming that what it reads is true, so the first thing you’ll want to do is find a ketubah with text that reflects the values you and the person you’re marrying share.

You also may want to strike the right balance for yourself between traditional and progressive options. Until the 20th century, almost all ketubot contained the same basic text in Aramaic and were signed only by the groom and two male witnesses. The document was essentially the groom’s marriage proposal to the bride and his pledge to “honor, support, and provide for her”. While many traditionally observant Jews continue to adhere to the original text and customs — or to keep them, but add to the ketubah a prenuptial agreement that promises a get, or Jewish divorce decree, if requested — a wide variety of alternatives are now available.

For example, at www.ketubah.com,  you’ll find (as of 2019) 32 different choices of pre-written texts including an option to write your own. Some offer language inclusive of same-sex couples or that reflects a more egalitarian view of the couple’s relationship. Others are specifically tailored for interfaith couples. If you don’t know which text to select, read several and consider which ones reflect your values.

You also will need to decide in which language or languages you’d like your ketubah to be. Many ketubot are in Hebrew or Aramaic, with side-by-side translation. When Paul Golin, an American Jew who serves as executive director of the Society for Humanistic Judaism, married Yurika Mizuno, who is from Japan, they had the ketubah at right created with English, Hebrew, and Japanese text.

If you choose to start from scratch and write your own text, it’s a good idea to consult with a rabbi or scholar of Jewish law. Rabbi Jodie Gordon of the Reform congregation Hevreh of Southern Berkshires in Great Barrington, Massachusetts suggests that custom-written ketubot include: the date of the wedding on both the Jewish and Gregorian calendars, the couple’s names as well as the names of witnesses in attendance, and, what she calls “a conversation of promise,” a reflection of what each partner wants in the relationship and the marriage as they move forward.

Once the text has been decided on, the next choices you’ll have to make are about style and presentation. For some couples, buying a ketubah is an investment in a piece of art. Some commission artists or artisans to create custom ketubot that can cost thousands of dollars. One place to find such artists is through the creative marketplace on Etsy.

More affordable ketubot can be found elsewhere online, at Judaica shops and at Jewish museum gift shops. A quick Google or Pinterest search will lead to plentiful options from simple to abstract to unusual like these these 3D style ketubot, this two-sided one, this Andy Warhol-inspired one, or this one set over a backdrop of the Guggenheim Museum in New York.

Crafty couples might also consider purchasing art supplies and making their own ketubah. MPArtworks Ketubah Studio’s offers a “paint-your-own DIY” ketubah, and fans of adult coloring books can now purchase coloring ketubot. You can select your own text and color in the designs that surround it. Use it as a way to unwind from your wedding planning, or offer it as an activity for a bridal shower or bachelor party — or as an activity just before the wedding. 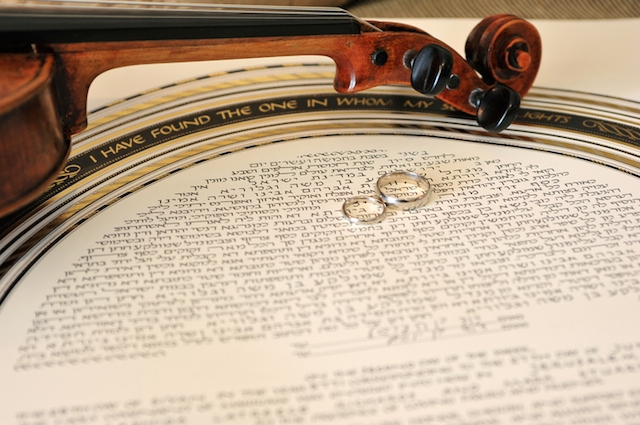 A small but emerging trend in the world of ketubot is the idea of replacing the ketubah altogether with what’s known as a “Brit Ahuvim” or a “lover’s covenant.” Jewish feminist theology professor Rachel Adler, who wrote Engendering Judaism: An Inclusive Theology and Ethics in 1998, introduced this alternative practice for those who find the gendered roots of the traditional ketubah off-putting. Some couples reject the notion that in their view, traditional ketubot were documents outlining a groom’s purchase of his wife. The idea of Brit Ahuvim is to create a new document, without roots to a traditional ketubah, that looks at marriage through an egalitarian lens and contains promises the couple makes to each other. Adler’s original sample text for Brit Ahuvim, as well as several other alternative ketubah texts, can be found here.

Whether your ketubah is an artist’s finest masterpiece or something simple and beautiful that you found in your local Judaica store or something you wrote and crafted with your own hands, it should be a document that you want to look at for the rest of your lives.

The Ketubah: Evolutions in the Jewish Marriage Contract

Once a protection for women, the traditional ketubah has been critiqued by liberal Jews on several grounds.

Couples can often choose a ketubah text that reflects their values and goals.