Time, in its essence, is an unceasing flow on which human beings have imposed meaning with arbitrary divisions and markers–years, months, weeks, days, minutes, and seconds. These units of time serve as measures for human activity in education, commerce, leisure, agriculture, and religion.

Jewish time grew out of God’s imposition of order on the primeval chaos. First, God separated the light from darkness, creating day and night. Then, as a reflection of God’s cycle of creation and rest, the work week was differentiated from Shabbat. Later, at the time of the Exodus, God mandated that the Israelites mark the new moon of Nisan, thereby establishing a monthly and yearly cycle.

As the body of Jewish law developed, the Jewish calendar has served to demarcate both holiday observances and numerous time-bound obligations. To ensure that certain commandments were completed at their appointed times, four different Jewish new years were established to provide boundaries and markers for these activities. For example, since the Israelites were required to contribute a tenth of the current year’s produce, they had to know exactly when the current agricultural year began and ended.

The first of Tishrei serves as the New Year for several purposes, the best known being the New Year for the civil calendar, or “the new year for seasons.” Rosh Hashanah literally means “the head of the year.” Jewish years are traditionally figured from creation (for example, this year is considered the 5763rd year from creation), with the New Year beginning on 1 Tishrei. Although Rosh Hashanah is not a well-defined holiday in the Torah, distinguished mostly as “a day when the horn is sounded” (Numbers 29:1), the Talmud expanded its religious connotations to make it the Jewish New Year and the anniversary of creation. Rosh Hashanah 8a explains, “For R. Zeira said [that Tishrei is considered the New Year for years in relation] to the seasons. And this [opinion of R. Zeira] is [in consonance with the view of] R. Eliezer, who said that the world was created in Tishrei.” In fact, the rabbis focused particularly on the creation of human beings, without whose perceptive ability the physical creation would go unappreciated.

As the beginning of the civil calendar, 1 Tishrei is also considered the new year for measuring the reigns of foreign kings, necessary because legal documents were dated by the current year of a monarch’s reign. Rather than measuring a king’s reign from the date he took office, 1 Tishrei served as a standard anniversary marking the end of a full year of rule, even if that “year” had only been part of a year.

The new year for setting the Sabbatical year, during which land may not be cultivated, is also 1 Tishrei. The command for observing a Sabbatical year appears in Leviticus 25:2-5, “When you enter the land that I assign to you, the land shall observe a sabbath of the Lord. Six years you may sow your field and six years you may prune your vineyard and gather in the yield. But in the seventh year the land shall have a sabbath of complete rest, a sabbath of the Lord: you shall not sow your field or prune your vineyard…it shall be a year of complete rest for the land.” Plowing and planting were forbidden from 1 Tishrei of the seventh year in the Sabbatical cycle, and people were allowed to gather only what the land could produce on its own, without cultivation.

Similarly, 1 Tishrei is the new year for setting the Jubilee year, the fiftieth year following seven cycles of Sabbatical years. Sowing was also forbidden during the Jubilee, but, in addition, all indentured Israelites were allowed to return to their homes and all tenured land was to be returned to its original owners. The laws of the Jubilee required that all land sales in Palestine be considered leases, with land costs computed in terms of the number of crop years remaining until the next Jubilee, which would begin on 1 Tishri.

1 Tishrei is also the new year for figuring the yearly tithe (ma’aser), or ten percent tax, on vegetables and grains. The Levites and priests were supported by these tithes, because they did not own land. The tithe for a particular year had to be paid with produce from the same year, thus requiring a standard date to begin and end each fiscal year. Tithing involved three steps: (1) The owner separated out the first tithe, or ma’aser rishon, and paid it to the Levites. (2) The Levites then separated out one tenth, called terumah, for the priests. (3) After separating out the first tithe, the owner had to put aside a second tithe, or ma’aser sheni, from the remainder of his produce. In the first, second, fourth, and fifth years of the sabbatical cycle, the owner was required either to consume this tithe in Jerusalem or sell it and purchase food to be eaten in Jerusalem. In the third and sixth years, the owner distributed this second tithe to the poor as a ma’aser ani, tithe of the poor.

The second new year is 15 Shevat, the New Year for trees. Most Jewish sources consider 15 Shevat as the New Year both for designating fruits as orlah (that is, forbidden to eat, because they have grown during the first three years after a tree’s planting) and for separating fruits for tithing. (Some sources, however, consider 1 Tishrei to be the new year for orlah and 15 Shevat for tithing.) This date was selected “because most of the winter rains are over” (Rosh Hashanah 14a), the sap has begun to rise, and the fruit has started to ripen. Fruits that have just begun to ripen–from the blossoming stage up to one third of full growth–are attributed to the previous year, whereas fruits that are more mature on 15 Shevat apply to the upcoming year. As with vegetables and grains, fruits that budded during one “fiscal year” could not be used as tithes on those that budded in another year.

The 15th of Shevat has become a minor holiday, Tu Bishevat. On this day, it is customary to eat, for the first time, a fruit from the new season, particularly one typical of the Land of Israel, and to say the Shehecheyanu blessing. In Ashkenazi communities in Europe, it was customary to eat 15 different kinds of fruits. The Sephardic mystics of Safed in the 16th century expanded the Tu Bishevat observance with a seder that uses the symbolism of fruit with and without shells to enact the process of opening up to God’s holiness. In modern Israel, Tu Bishevat has come to symbolize the redemption of the land and the awakening of environmental awareness through the planting of trees.

The third Jewish new year is 1 Nisan, which corresponds to the season of the redemption from Egypt and the birth of the Israelite nation. This particularistic national event defines the nature of the New Year celebrated on 1 Nisan. The Torah’s command that “this month [Nisan] is for you the beginning of the months, it shall be the first month of the year to you” tied all counting of Jewish religious festivals to the Exodus from Egypt, and this special religious counting system distinguished Israel from other nations.

The first of Nisan is also the New Year for the reigns of Jewish kings (in line with the national emphasis of the season), the renting of houses, and the counting involved in the prohibition against delaying the fulfillment of vows. When a person vows to dedicate an object to the Sanctuary, he must fulfill the vow before three festivals, beginning with Passover, have passed. 1 Nisan is also the due date for using the half-shekel contribution described on Shabbat Shekalim to purchase communal sacrifices for the Temple.

The last new year, 1 Elul, is the New Year for the tithing of cattle. The tithe for cattle had to be made from cattle born in the same fiscal year, between 1 Elul one year and the next. 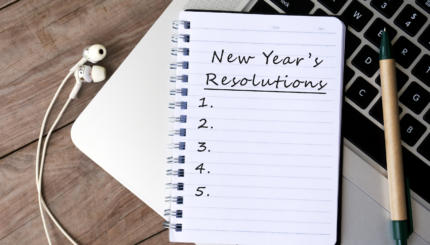 The Jewish Way To Make a New Year’s Resolution

Jewish wisdom, anchored in the rhythms of the year, can help us set benchmarks that make sticking to our commitments more likely.