Reprinted with permission from Gates of the Season: A Guide to the Jewish Year (Central Conference of American Rabbis)

Theholiday spirit is a complicated web of feelings and expectations. The crispness of the air, the best china on the table, the cleaning of the house, and the new suit of clothes are all important elements of preparation for the festival  we are about to celebrate. The delicious aroma of holiday foods transmits wonderful memories and ethnic consciousness. The honey cake just out of the oven tells us it is Rosh Hashanah; the crisp, slightly oniony smell of potato latkes reminds us it is Hanukkah; the making of matzah balls and charoset heralds the beginning of Pesach.

Holiday foods enhance and elevate our festival celebration. By reserving certain distinctive foods for special days, each holiday meal takes on its own joyous and familiar character. Festival foods reinforce the meaning of the holiday and add to the celebratory mood of the diners. Every Jewish family has its favorite holiday foods. Through time these foods have become imbued with beautiful associations and warm memories. They have acquired a uniqueness and even a sanctity of their own which are handed down from generation to generation. These special recipes are part of our rich cultural and religious heritage.

Holiday foods are as different and varied as the Jewish people. Wherever Jews have lived they have adopted and embellished foods from the local culture. Foods from ancient Egypt and Rome, medieval Germany and Spain, and nineteenth-century Russia and Hungary grace the holiday table. The spicy and aromatic cookery of the Sephardic Jews is as rich and diversified as that of Ashkenazic Jewry.

The traditional Sabbath eve meal often consists of chicken soup with kreplach (meat filled dough), chopped liver or gefilte fish,chicken or fish prepared in any number of ways, a kugel (noodle or potato pudding), and vegetables. The traditional dish for Shabbat afternoon in Eastern Europe was cholent (meaning “hot”). Potatoes, kasha(groats), and the little meat available were placed into a pot and cooked for twenty-four hours in the community oven before being carried home by a child for the noon meal. In this country, a typical cholentincludes brisket, onions, lima beans, and barley or potatoes. It is a perfect dish for crock pot cooking. Sephardic dishes for Shabbat would include various vegetables, such as carrots, zucchini, or eggplants stuffed with ground meat, or delicious rice-based dishes.

Sweet foods, symbolizing the anticipated sweetness of the year ahead, are prominent among the delicacies that constitute the Rosh Hashanah festive meal. Apples dipped in honey, lekach (honey and spice cake), tayglach (honey and nut pastry), and honey cake are eaten for dessert. The challah is baked in a round shape (reminding us of eternity) instead of a braid and is enriched with extra eggs, sugar, and raisins to signify the promise for a sweet and rich year. Gefilte fish, chicken soup with three-cornered kreplach (said to symbolize the three patriarchs), carrot or prune tzimmes, and meat or fowl would complete the meal.

On the eve of Yom Kippur, it is important to serve a filling meal without provoking thirst. The meal is similar to that of Rosh Hashanah less some of the sweets. The meal is eaten before the onset of Yom Kippur. It is called seudah mafseket, the concluding meal before a fast. There is no kiddush, and the festival candles are lit after the meal and before going to the synagogue. A light dairy dinner is often eaten after the fast, consisting of assorted fish, eggs, and salads.

The Sukkot table is laden with the fruits and vegetables of the fall harvest. Stuffed foods of all kinds are served to symbolize the richness of the harvest. Cabbage filled with ground beef in a sweet and sour sauce, holishkes (or gefilte krult), are popular among Ashkenazic Jews. Israelis stuff eggplants (chatsilim) and green peppers (pilpel memula). Strudel stuffed with apples, peaches, or other fruits is served for dessert.

Hanukkah is celebrated by eating foods cooked in oil, such as potato latkes(potato pancakes) and sufganyot (jelly doughnuts) to symbolize the miracle of the oil. It is also customary to eat dairy dishes in remembrance of the story of Judith in the Apocrypha.

Hamantaschen, a three-cornered pastry filled with prunes, poppy seeds (muhn), apricots, or other fruits, is the most popular of Purim foods. It is three-cornered, tradition says, to look like Haman’s ears or like the purse he wanted to fill with the Jews’ gold. Haman’s ears are a favorite Purim dessert. They are a fritter-like pastry, deep-fried, and sprinkled with sugar or honey. They are known as Hamansooren in Holland, Orechie de Aman in Italy, Oznei Haman in Israel, and Honuelos de Haman in Spanish-speaking countries.

The sederis a celebration and learning experience shared by all present. The special foods served enhance the beauty and the meaning of the night. Passover foods vary in Sephardic and Ashkenazic communities. Ashkenazim exclude rice while Sephardim serve rice. Ashkenazim also exclude millet, corn, and legumes (beans and nuts). The Rabbis thought that the seed inside the bean would “rise” like leavening. Since no leaven (chamets) may be used, matzah is the main ingredient of Passover cooking. There is a rich variety of foods made from matzah and matzah meal. Ashkenazic favorites are kneidlach (matzahmeal dumplings), matzah brei (fried matzahwith egg and onion), and kremslach (matzah meal fritters), which recall the meal cakes offered as sacrifices in Biblical times. Matzahmeal or potato flour is used instead of flour.

Sephardic dishes are pahthut, a Yemenite soup stew made with matzahmeal, and Turkish minas and mahmuras, layers of matzahfilled with vegetables, cheese, or meat.

Dairy foods are served on Shavuot. According to legend, after our ancestors received the Torah on Mt. Sinai, they returned to their tents too hungry to wait for meat to be cooked so they ate previously prepared dairy dishes. Milk, cheese, and honey are the favorite foods of this festival. The sweet dishes made from cheese and honey symbolize the sweetness and richness of the Torah. Popular dishes are blintzes stuffed with cheese, cheese-filled Strudel, beet Borsht served with sour cream, kugel(noodle pudding), and cheese cake. Sephardic Jews serve dishes like shpongous (a cheese-spinach bake), sometimes using salted ewe’s milk.

Our festivals are always enhanced through the rich tastes and textures of the holiday foods. The beauty and delight of these specially prepared meals add a great deal to the Hidur Mitzvah, the aesthetic enjoyment of our holidays. 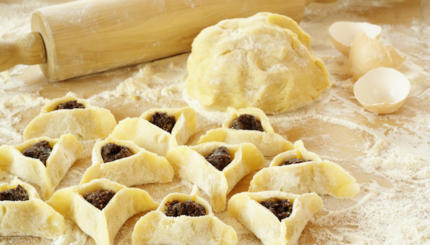 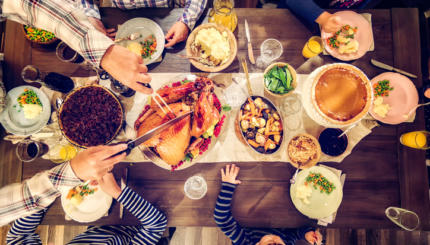 If you’re preparing a dairy-free Thanksgiving meal, there are plenty of ways to make your sides full of flavor without ...