with permission of the author and the

Lesbianism is not mentioned in the Hebrew Bible, in contrast to male homosexual behavior, which is expressly forbidden as a capital crime. The absence of discussion of lesbianism in this context has raised scholarly interest. Biblical critics have suggested that this difference exists because female homoerotic behavior would not have been considered sexual behavior, which in ancient times was understood to require the emission of semen.

The first discussion of female homoeroticism in Jewish texts is found in Sifra, a postbiblical commentary on the book of Leviticus, edited in the second century a.d. The reference is to a passage in Leviticus 18, which prohibits Israelite participation in acts deemed “the doings of Egypt.” The commentator in Sifra suggests that lesbian marriage was one of the acts that would be included in this category. What we can infer from this text is that at the time of the writing of Sifra, Jewish communities were cognizant of the Roman practice of women marrying other women.

The Talmud, a compendium of Jewish law and practice compiled in the fifth century a.d., includes passages about mesolelot, female homoerotic behavior, not lesbian marriage. The word mesolelot is understood by later commentators to refer to the practice of tribadism, women rubbing genitals against each other. A passage in the Talmud (Yevamot 76a) questions whether women who practice mesolelot are eligible to marry priests. Virginity is the criterion upon which eligibility for priestly marriage is based: For example, a divorced woman or widow is not allowed to marry a priest.

The Mishnah gives two opinions about the eligibility for priestly marriage of one who practices mesolelot. The accepted opinion is that such a woman is eligible, although the minority opinion is that she is not. In the majority opinion, lesbian behavior is considered a minor infraction.

This passage establishes the existence of female homoeroticism in Jewish communities in ancient times. It also suggests that this behavior was understood by rabbinic authorities as a specific practice, not as a person’s sexual orientation, as the question is raised in the context of marriage to a man. Some authorities place it in the category of sexual practice, and as such it disqualifies the practitioner from the category of virgin.

There is one significant discussion of female homoerotic behavior in the medieval era. This is found in a compilation of laws known as the Mishneh Torah, written by legal scholar and philosopher Moses Maimonides in the twelfth century. Maimonides reiterates the connection to the Levitical prohibition against the “doings of Egypt,” but also suggests that this behavior should not disqualify a woman from marrying a priest because it is still only a minor infraction.

Maimonides then goes on to suggest that the courts administer a flogging to a woman who is caught engaging in homoerotic behavior. Finally, Maimonides warns men to keep their wives from visiting with women who are known to practice mesolelot with other women. This text views lesbian behavior as threatening to the institution of marriage and worthy of punishment.

During the modern period, female homoeroticism is mentioned infrequently in Jewish sources. Most references are from fictional writings. An early example is found in a Yiddish play written by Sholem Asch entitled Got fun Nekome, God of Vengeance. It was translated into English and produced on Broadway in 1923. This play was the first with a lesbian theme to be performed on the American stage. The plot focused on a lesbian relationship between a prostitute and the daughter of a brothel owner, and included several explicit homoerotic scenes. Noted Yiddish author Isaac Bashevis Singer also wrote several short stories about lesbian love.

The first Jewish novel by a woman that explored lesbian themes was Wasteland (1946), written by Ruth Seid under the pseudonym of Jo Sinclair. The female protagonist was open about her sexuality to her family. The novel is about her brother’s effort to come to terms with her lesbianism. This frank discussion of lesbian themes and the portrayal of lesbianism as a psychologically healthy alternative was unusual for its time.

During the early part of the twentieth century, women, including Jewish women, began to live openly as lesbians. Gertrude Stein (pictured) is perhaps the best-known example. Pauline Newman, an organizer of the Jewish labor movement, lived openly with her partner in Greenwich Village, where they raised a child together. But for the most part, women who loved women prior to the 1960s neither identified publicly as lesbian nor had the opportunity to live openly in partnerships.

The example of Lillian Wald, noted Jewish social reformer, was more typical of this period. Wald’s relationships were crucial to her social world, yet remained hidden from view. It is still considered controversial to label Wald a lesbian, despite considerable historical evidence.

One result of the feminist and gay liberation movements in the 1960s and 1970s was that large numbers of women began to claim lesbian identity. It was in the context of these movements that lesbians began to explore Jewish identity as well.

The early 1980s witnessed an explosion of small groups of lesbians who were beginning to make connections to their Jewish identities. The members of these groups identified their simultaneous rejection as Jews in the lesbian community and as lesbians in the Jewish community. Evelyn Torton Beck made these issues visible in her groundbreaking anthology of writings by Jewish lesbians, Nice Jewish Girls: A Lesbian Anthology (1982). Many lesbian novels with Jewish themes were published by women’s presses. Progressive Jewish organizations like New Jewish Agenda began discussions of how to incorporate the needs of gay men and lesbians in Jewish life.

This exploration of the connections between lesbian and Jewish identities was continued in Tribe of Dina (1986). Edited by leading secular Jewish lesbian thinkers Irena Klepfisz and Melanie Kaye/Kantrowitz, Tribe of Dina included essays by heterosexual and lesbian feminists exploring Jewish identity. In 1989, Christie Balka and Andy Rose edited Lesbian Rabbis: The First Generation. The volume is edited by three rabbis who identify as lesbian, Rebecca Alpert, Sue Levi Elwell and Shirley Idelson, and includes autobiographical essays by eighteen Reform, Conservative and Reconstructionist lesbian rabbis ordained in the 1970s, 80s and early 90s.

The gay and lesbian synagogue movement, which began in the early 1970s, also provided a locus for lesbians to explore religious identity. There are gay and lesbian synagogues in most metropolitan centers in the United States. Several of those synagogues have lesbian rabbis, including Congregation Beth Simchat Torah in New York City, which named Sharon Kleinbaum, a graduate of Reconstructionist Rabbinical College, as their first rabbinic leader in 1992. Reform rabbis Denise Eger and Lisa Edwards both serve gay and lesbian congregations in Los Angeles.

Yet lesbian Jews continue to voice concerns that go beyond acceptance and toleration. They seek a reinterpretation of Jewish values, including the assumption that heterosexuality is normative. They desire inclusion of their visions and stories as part of a reconstructed Jewish textual tradition. And they aim to create an environment of complete comfort in which to claim their identity and celebrate the occasions of their lives. 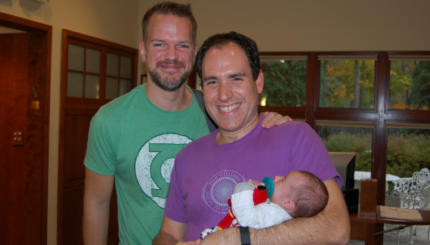 As part of Keshet’s partnership with the Jewish Women’s Archive, we are raising up the profiles and voices of queer ...