Reprinted with permission of the author from On Being a Jew (The Johns Hopkins University Press). In this book of dialogues, an older traditionalist Jew, Albert Abbadi, explains Judaism to a young graduate student, Judd Lewis. Responding to a question about the importance of Hebrew, Abbadi first offers the observation that “Hebrew gives you access” to the synagogue service and Jewish classics “in a way that you would not otherwise have.” But beyond that, he argues, Hebrew also offers a “crucial advantage” because “a language is much more than a mere vehicle for thoughts. It shapes thoughts.” He continues:

JL: And why is that so important?

So here, Hebrew too opens up a space inside you and allows these words to come back to you. Like the English thoughts that begin to intrude on the French native speaker, so Hebrew thoughts now have an opportunity to intrude on your own thinking and allow you to see what otherwise you might be blind to.

This is one reason, by the way, that Hebrew is called leshon ha-kodesh, “the holy language.” It is not that one language is intrinsically, by its origin or structure, holier than another. But Hebrew, by dint of being the language of Torah, ultimately became the location the world of a certain way of seeing. 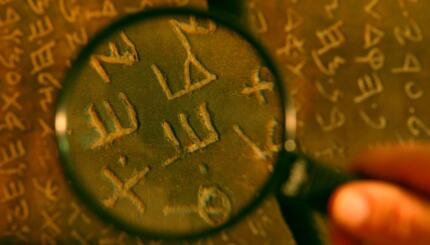 Reconciling the experience of repeatedly praying from an established text with the need for prayer to come from the heart.

Language, Identity, and the Scandal of American Jewry

American Jews have forgotten their letters and words.