In the early period of Hasidism– the movement of religious revival that brought new spirit to the lives of Jews in Poland and the Ukraine toward in the 18th century–prayer played a primary role. These observations on Hasidic prayer are excerpted with permission from the editors’ introduction to Your Word is Fire: The Hasidic Masters on Contemplative Prayer (Jewish Lights; originally published by the Paulist Press, 1977).

In early Hasidism, worship, particularly in the form of contemplative prayer, came to be clearly identified as the central focus of the Jew’s religious life. Both the ecstatic outpourings of ordinary people and the highly sophisticated treatments of devotional psychology in the works of the Hasidic masters bear witness to this new and unique emphasis upon the inner life of prayer.

Hasidism views all of Jewish life as "the way of service." Man’s only task in life is the service of God; prayer, study, and all of the commandments are seen instrumentally: They are the means by which the Jew may fulfill his sacred task. Hasidic authors tirelessly warn their readers against the dangers of robot-like performance of the commandments. Each ritual act must have its way lighted by the glow of inner devotion, else it "has no wings" and cannot ascend to God. Even acts of human kindness, the "Deeds of Love" of which the rabbis had spoken, are here seen in devotional terms: There is no higher sacred act than that of helping another to discover the presence of God within his soul.

The core of "service" as seen in Hasidism is the fulfillment of that desire, deeply implanted within each human soul, to return to its original state of oneness with God. Prayer, by its very nature pointing to the intimate relationship between God and soul, becomes the focal point of Hasidic religiosity. The Ba’al Shem Tov (1700-1760), the first great master of the movement, was told by heaven that all his spiritual attainments derives not from any claim to scholarship (as was commonly to be expected in non-Hasidic circles of the time), but rather from the great devotion with which he prayed.

The ecstatic quality of prayer-life in early Hasidism has been described in many ways. The Ba’al Shem Tov was said to tremble so greatly in his prayer that bits of grain in a nearby barrel were seen to join him in his trembling. A disciple who touched the master’s prayer-garment was so seized with tremors that he had to pray for release. One of the followers was so overcome by ecstasy while preparing for prayer in the ritual bath that he ran from the bathhouse to the adjoining synagogue and danced on the tables without realizing that he as not fully dressed.

Strange and seemingly inhuman noises, violent movements of the body, even the turning of cartwheels before the Torah, all characterized the devotional climate of some early Hasidic groups. The masters themselves sometimes felt called upon to restore the values of inwardness and silence to a world where unbridled mystical ecstasy was coming to be the order of the day.

What was it about, all this ecstatic frenzy? Prayer was surely not a new discovery for the Jew in the 18th century. In order to understand this renewed excitement over prayer, we must realize that Hasidism was, in the truest sense, a revival movement, one that seeks to bring new life to old forms that are ever faced with the dangers of petrification and decay.

The strength of Judaism has always been its ability to at once preserve and renew its most ancient forms. This is especially true with regard to liturgical prayer. The power of liturgy lies largely in its sameness and constant repetition, but in that same familiarity lies the potential downfall of such prayer as it degenerates into mere mechanistic recitation. The Ba’al Shem Tov and his followers were acutely aware of this problem. They knew that prayer could only work if it were a constant source for the rediscovery of God’s presence in the world.

The mystical ecstasy of Hasidism flows from the rediscovery that God is present in all of human life. All things and all moments are vessels that contain the Presence. "The whole earth is filled with His glory!" The old Kabbalistic [mystical] formula "There is no place devoid of Him" became an ecstatic outcry in early Hasidism. Since all of Creation is filled with God’s Presence, there is neither place nor moment that cannot become an opening in which one may encounter Him. Hasidism thus teaches that all of life is an extension of the hour of prayer, and that prayer itself is the focal point around which one’s entire day is centered.

The followers of the Ba’al Shem Tov were not the first to assert the primacy of prayer in Judaism. For 200 years before the birth of Hasidism, the mystic teachers who followed in the path of R. Issac Luria (1534-1572) of Safed had already placed boundless store in the power of man to uplift the fallen words by means of meditative prayer. Luriannic prayer was filled with a kind of urgent and theurgic messianism: By means of an infinitely complex system of theosophical meditations, in which each word and letter of prayer was used to address a particular configuration of the divine potencies, man could bring about the long-awaited redemption of Israel and the world.

Changes From Luria to Hasidism

Hasidism continued the Luriannic path, but with two important changes. From the outset, Hasidic piety contained within it an ideal of simplicity. Hasidism may indeed be viewed socially as both the political and spiritual self-assertion of the poorly educated lower classes against the elitism of the abstrusely learned.

Thus the complex contemplative system of the Luriannic Kabbalists, which itself required a great deal of esoteric learning, became intolerable as an ideal. The word spoken with simple wholeness of heart came to be more highly valued than that spoken with deep knowledge of esoteric symbols: The depths of contemplation became open to all who sought truly to enter them. One of the masters explained this change in values by the parable of the key and the lock. In former times, the mystics had access to a complicated series of keys that could unlock the heart in prayer. We no longer have the keys; all we can do is smash the lock. The only true prerequisite for such prayer, he said, is a broken heart.

The name of the redemption to be brought about by prayer was also transformed in Hasidism. Largely because of the tragic failure of messianism in the religious uprising led by the false Messiah Shabbatai Zvi, the use of prayer as a direct vehicle for historic redemption was underplayed by Hasidic teachings.

By means of devekut, or intimate attachment to God, one could come to personally transcend all the trials of life in the world, while the external historical situation in fact remained unchanged. Redemption within this world became the goal. For some Hasidic authors, the devekut state as attained by the individual came to replace tikkun, eschatalogical world-redemption, as the central goal of the religious life. 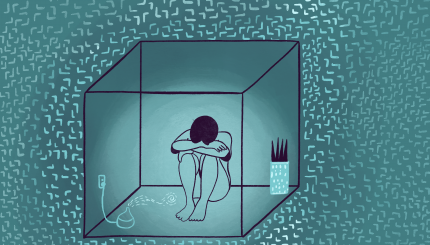 What Hasidic Wisdom Teaches About Sadness

Holism, healing and the heart in Hasidic theology.

Beyond services and synagogue, the challenge of living a prayerful life