“Glatt Kosher” means something like “extra kosher” and applies to chicken and fish as well as meat.

Glatt is Yiddish for smooth, and in the context of kashrut it means that the lungs of the animal were smooth, without any adhesions that could potentially prohibit the animal as a trefa, an issue only applicable to animals, not fowl or nonmeat products.

In colloquial discourse, treyf refers to anything that is not kosher. The technical definition of trefa is based on Exodus 22:30 (“Do not eat meat from an animal torn [trefa] in the field”) and refers to an animal with any of a specific group of physical defects that are detailed in the [Babylonian] Talmud (most of the third chapter of Hullin; 42a-59a) and [traditional Jewish law] codes (Maimonides, Mishneh Torah, Laws of Forbidden Foods 4:6-9 and Laws of Slaughter ch. 5 -11; Shulchan Arukh, Yoreh De’ah [“YD”] 29-60). Examples of these “defects,” which often go far beyond the health inspection of the USDA, include certain lesions, lacerations, broken limbs, missing or punctured organs, or the result of an attack by a larger animal. Such defects can occur in, and thereby render, both animals and fowl tref. Because most of these defects are uncommon, it may be assumed that most animals are healthy (Shach [commentary to Shulchan Arukh], YD 39:1) and hence there is no requirement to inspect every animal for them. (This does not imply that a blind eye may be turned to their presence.)

Lungs are a special concern

An exception is the lung of an animal, on which adhesions [sirhot] and other problems may develop. While these problems are not common, they do occur more frequently than other trefot [i.e., defects]. Their relative prevalence led the rabbis to mandate that the lungs of every animal be examined, both manually while still in its natural position in the animal, and visually following its removal from the thoracic cavity (Shulchan Arukh, YD 39:1). (Nowadays, another problem that occurs with relative frequency and is therefore also inspected for is holes of the second stomach, the bet ha-kosot [reticulum], caused by animals eating nails and other sharp metal objects.) Because a hole in the lung renders the animal a trefa, adhesions, i.e., pathologically arising bands of collagen fibers, are problematic either because they indicate the presence of a perforation that has been insufficiently sealed ([so says Talmud commentator] Rashi) or because they can become loosened, thereby causing a hole to develop ([so say the Talmud commentators known collectively as] Tosafot).

In the U.S., lung adhesions usually do not occur on fowl; hence the rest of this discussion concerns only meat, not chicken. (The lungs of fowl can have defects that render it trefa, but not the same kind of adhesions that occur in animals. There are those who feel that nowadays fowl lung problems are also becoming more prevalent and thus require a visual and tactile inspection of fowl lungs.)

The Shulchan Arukh describes many types of adhesions in intricate detail (YD 39:4-13), the overwhelming majority of which render the animal a trefa. [Rabbi Moshe Isserles, the sixteenth century Polish rabbi whose comments on Shulchan Arukh are incorporated into every edition] (YD 39:13) concludes the discussion about lung adhesions with a description of a method of peeling and testing many types of adhesions, thereby resulting in many more animals determined to be kosher. [Isserles] himself expressed certain hesitations about aspects of this leniency, but because it had gained wide acceptance and did have a firm basis, he ruled that it could be followed. However, he cautions that the peeling and testing must be performed by an exceedingly God-fearing individual.

Glatt in Our Time

Because this peeling is mentioned and approved by [Isserles] but not by the author of the Shulhan Arukh, Rabbi Yosef Karo, Sephardim, who follow the rulings of Rabbi Karo, are required to eat only glatt (halak, in Hebrew) meat as defined by Karo. [Karo] is also the author of the Bet Yosef [an extensive commentary to an earlier code of Jewish law]; therefore, such meat is termed “glatt/halak Bet Yosef.” For Ashkenazim, there is a tradition that a small, easily removable adhesion is defined as a lower class of adhesion, known as rir, and that the presence of up to two such small, easily removable adhesions still qualifies the animal as glatt according to Ashkenazic tradition. Eating glatt is a worthy stringency that avoids potential problems raised by [Isserles’s] controversial leniency.

It should be emphasized that [Isserles’s] ruling is certainly legitimate and, in theory, non-glatt meat, if inspected properly, is 100% kosher for Ashkenazim. Today, the Orthodox Union (and most other kashrut organizations in the U.S.) will only certify meat that is glatt, albeit not necessarily glatt Bet Yosef. An important postscript is that [Isserles’s] ruling is defined as non-applicable to young, tender animals such as lamb, kid, and calf (YD 39:13). Therefore, all lamb chops, veal, or other meat from young animals must be glatt Bet Yosef, even for Ashkenazim.

From the above explanation, it is clear that referring to chicken, fish, or dairy products as glatt is a misuse of the term. In addition, even when referring to meat, it only attests to the status of the lung, but makes no comment about the standards of, for example, the [slaughtering procedure].

Misconceptions about the meaning of glatt are so widespread that, for many, the term glatt has colloquially taken on the implication of a higher standard, similar to the term mehadrin. In addition, some caterers or stores may have only one kashrut sticker that they use on all products, and hence the sticker on the corned beef sandwich and on the omelette will both say “glatt kosher.” Although it is technically inaccurate to label chicken, fish, lamb, or dairy products as glatt, it is not uncommon to find such labeling. In the majority of cases, it is probably not being done to mislead; but in some instances it may be intended to imply that the product was processed under a superior hashgahah [rabbinic supervision], as per the term’s informal usage.

Rabbi Zivotofsky’s monthly series of columns entitled “What’s the Truth About…?” is “devoted to researching commonly-held beliefs.” The body of the article is reprinted in full, but additional bibliographic material in the notes may be found in the original article. The terms “animal” and “meat” are used here somewhat idiosyncratically, to refer to kosher mammals and their flesh but not to fowl and the flesh of fowl. The author and publisher note that “this material is for study purposes only and should not be relied upon for practical halakhah. One should consult his own competent halakhic authority for specific questions.”

Reprinted from Jewish Action 60:2, Winter 1999, published by the Union of Orthodox Jewish Congregations of America

Blood must be removed from kosher meat, usually by salting and soaking, before it may be cooked and consumed. 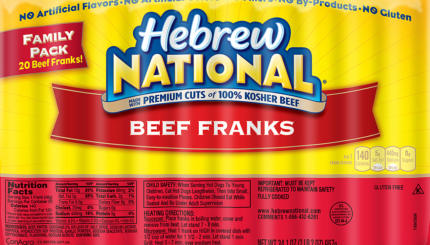 The company says they are, but many rabbinic authorities disagree.