Protecting Biodiversity: A Covenant With Every Living Thing

One of the great debates within the environmental community is the proper human posture toward the preservation of diverse species. On the one hand, there are those who argue that extinction is the normal method through which nature keeps itself trim. Throughout the eons, a great many species have gone the way of the Dodo bird and the stegosaurus–no longer able to compete successfully for a habitable niche in a difficult world.

This constant cycle of evolution and extinction may be unfortunate from the perspective of the individual Dodo, but represents a real strength of natural adaptation to changing conditions.

It is through extinction that life remains vital. While that may be true, it is also now the case that human beings have become a significant factor in deciding which species survive.  The High Holy Day prayer, “who shall live and who shall die,” emits an eerie pall when seen in the light of our own excessive impact on other species.

In the past, extinction embodied the slow reconciliation between living things and their environment. Now it is the rapid–sometimes only a few decades–intrusion of human thoughtlessness upon the natural order. Many species that are fully capable of surviving in the world cannot cope with what people are doing to our planet. As we overfish our seas, deplete our forests and tropical jungles, pollute our air and water, destroy the ozone, and pile up mountains of non-degradable garbage, we need to re-focus our attention, to stop and inquire about the worth of all living things. Are animals and plants simply tools for humans to use as we choose, or is there a purpose to all things under the heavens?

In the Creation story, the Torah relates a magisterial unfolding of order over chaos, of life over death, as God’s word becomes tangible. Creation moves from simplicity to complexity, from homogeneity to diversity, and, paradoxically, from chaos to order.

The Rabbis of Midrash Bereshit Rabbah state their viewpoint unambiguously. “Even those things which you may regard as completely superfluous to the creation of the world, such as fleas, gnats and flies, even they too are included in the creation of the world, and the Holy Blessed One carries out the divine purpose through every [living] thing, even through a snake, a scorpion, a gnat, or a frog.”

It is no coincidence that the animals selected to illustrate the Rabbis’ claim are precisely the ones that seem repulsive to most human beings. Few of us like fleas or snakes. We don’t hang their pictures on our walls or send their image on greeting cards, and few poets rhapsodize about their beauty and grace.

Too often, we presume to judge the worth of Creation by its appeal to our human perspective. The Midrash insists that our criteria are insufficient. The world does not exist merely to please us.  While human beings do form the pinnacle of God’s creation, the world and the cosmos remain God’s creation, not our own. Therefore the standards of value come not from us, but from God.

Stories in the midrash tell of the prescient ability of the sages to recognize scorpions and snakes, frogs and leaves as “intended to perform God’s commission.” We, too, need to re-focus our vision to be able to do the same. The complex interdependence of living creatures–of the myriad plants and animals that populate our globe–are essential to the continuation of life, just as the remarkable range of cells and structures in the human body all contribute to its vitality. We diminish that variety at our own peril.

But the danger is more than simply one of physical survival. A second danger, more subtle, but no less real, emerges when we coddle our egocentric insistence that the world should answer to human standards and human utility. In the words of the psalmist, “How vast Your works, O Lord. Your designs are beyond our grasp.” The glory of the world–of which we are a part–is directed beyond us, reflecting the grandeur and transcendence of its sacred Source.

Reprinted with permission from the American Jewish University.

There are real actions we can take to preserve species diversity. 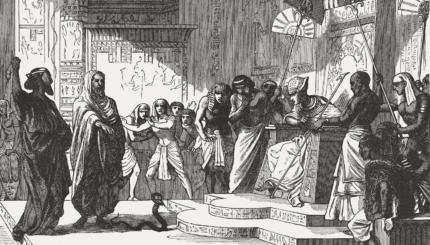