3 Things to Think About on Sukkot

Joy Is A Religious Obligation

Reprinted with permission of the author  from
The Jewish Way: Living the Holidays
.

Through the centuries, commentators have puzzled over the rationale of the Sukkot holiday. The actual anniversary of the Exodus is 15 Nissan. Passover comes in the spring when nature is freed from the bonds of winter, just as the Jews were released from the house of bondage in Egypt. Sukkot’s date in the fall reflects no anniversary, indeed, no obvious connection to the redemption.

Modern scholars have argued that the calendar dates of Passover and Sukkot reflect their roots in agricultural festivals, celebrating the coming of the spring and fall harvests. Two traditional scholars, Maimonides and Jacob ben Asher (a medieval Spanish authority on Jewish law), explain that the Sukkot celebration was deliberately scheduled during an “inappropriate” season. On Sukkot (meaning booths), traditional Jews enter into booths–imitations of the portable homes the Israelites lived in during their wanderings in the desert.

Jacob ben Asher reasons that if Jews were to move into open-air booths in the spring during warm weather, it would appear to be less a commemoration of Exodus than a communion with nature. The Torah bade the people of Israel go into the booth in the cool of autumn when it is unusual to live outdoors. On1ookers are prompted to ask: Why do these people dwell in booths at this time? The answer is: to obey the will of the Creator and testify to the Exodus and the subsequent wandering.

But Sukkot is more than an encore of Passover. On Passover, Jews restage the great event of liberation. Sukkot celebrates the way of liberation–the march across a barren desert to freedom and the Promised Land.

What happens the morning after redemption? It is like the old Hollywood movie: After the ups and downs of courtship, the boy and girl marry. They kiss, fade out, and cut! Presumably they live happily ever after. But that is not the way life works. It is much harder to handle the daily struggle of life than the highs and lows of courtship. The 50 percent American divorce rate is proof enough of that.

The Jews rose to the Exodus occasion with a great act of heroism–departing. But the daily strain of collecting manna and pitching tents and carrying their children through the desert eroded their commitment. Time and again, they were thrown by the prosaic frustrations of no meat, of boring food, of insufficient water.

The real achievement of freedom does not come in one day; there is no quick cure for slavery. The liberated person is the one who learns to accept the daily challenges of existence as the expression of self-fulfillment and responsibility. Sukkot commemorates the maturation of the Israelites, achieved not in crossing the Red Sea but in walking the long way to freedom. It is relatively easy to rise to one peak moment of self-abnegation and courageous commitment. It is more taxing and more heroic to wrestle with everyday obstacles without highs or diversions. True maturity means learning to appreciate the finite rewards of every day along the way. Some parents receive no pleasure from their children because they are overwhelmed by the constant anxieties, conflicts, and potential setbacks of the growing-up process. Parents are far happier–and children feel much better about themselves–when the simple joys of every day are shared and appreciated.

Passover celebrates a brave departure through a festive meal. Sukkot marks the hasty lunches and the endless wandering in the desert. Sukkot expresses the deeper Exodus–the reflective, gritty days of marching, during which a new generation grew up. Freedom came as the end result of pitching tents (booths) and taking them down over the course of 14,600 days. Sukkot honors the forty-three thousand meals prepared on the desert trek, the cleanups, the washing of utensils. Passover celebrates a moment of pure triumph. Sukkot celebrates a seemingly endless 40-year journey. Passover is the holiday of faith; Sukkot is the holiday of faithfulness.

What Are Pilgrimage Festivals? 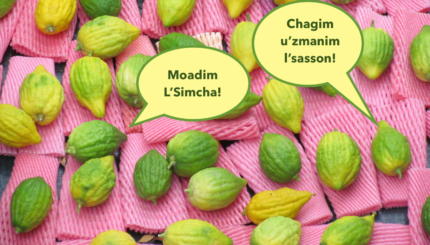 How to Greet Someone on Sukkot

Traditional ways to wish others a joyous holiday.