Jewish literature in Europe can be divided into two broad categories: literature written in traditional Jewish languages, such as Yiddish, Hebrew, and Ladino, and literature written in the language of the country the writer happened to live in. Because many Jewish writers wrote in German, Russian, French, and other European languages, what we call “European Jewish literature” overlaps with European literature as a whole. Thomas Mann, Franz Kafka, and Isaac Babel can be counted as “Jewish writers” and also, of course, “major European writers.”

Since Jewish writers write in so many languages, any attempts to construct a “modern Jewish canon”–such as the landmark effort in 2001 by leading scholars including Harvard’s Ruth Wisse and Hebrew University’s Gershon Shaked to draw up a list of 100 Great Jewish Books–tend to be incredibly multilingual lists. The Great Books list, released by the National Yiddish Book Center, and Wisse’s book The Modern Jewish Canon discuss works in languages ranging from Yiddish, Hebrew, and English, to Russian, French, Dutch, Polish, and Czech.

The number of translations available into English is increasing. For an understanding of shtetl (small village) life, the Yiddish short-story writers are an excellent place to begin. Sholom Aleichem, I.L. Peretz, and Mendele Mocher Seforim preserved a world of mostly poverty-stricken Jews struggling to survive and believe in whatever they could. These stories include hapless characters like the beggars of Kasrilivke and the fools of Chelm. The humor and the fantastical touches of these writers can be seen in Poland-born Isaac Bashevis Singer, who won the Nobel Prize and whose work has been widely translated into English. Singer writes of golems (human-created beings who become animate), imaginary spirits, and old-world characters.

But European Jewish literature in Jewish languages is not all golems and goblins. The Russian-born Hebrew poets Chaim Nachman Bialik and Saul Tchernichovsky, both writing in the late 1800s and early 1900s, laid the foundation for modern Israeli literature, and both wrote of the land, love, Zionism, and faith. The medieval Hebrew poems written in Europe can be found in the machzor (High Holiday prayerbook) and the siddur (everyday prayerbook); they are part of the daily lives of Jews around the world, and preserve a sense of belief despite the travails of Jewish history.

It’s sometimes hard to determine if European writers who happen to be Jewish are really “Jewish writers.” Some writers who grew up in Jewish homes did not write on Jewish topics while others wrote on Jewish topics throughout their career. For an introduction to the wide world of Jewish writers who do write about Judaism, two anthologies into English offer a great start: The Oxford Book of Jewish Short Stories, edited by Ilan Stavans, and Voices Within the Ark: The Modern Jewish Poets, an international anthology of Jewish poetry edited by Howard Schwartz and Anthony Rudolf.

Leafing through these and other anthologies, you’ll notice plenty of pre-Holocaust work. But of course, the destruction of the Holocaust did not come without its witnesses in literature. In Hungary, the great poet Miklos Radnoti was taken to a forced labor camp, and he wrote his last poems under terrifying conditions. On a death march, Radnoti was shot by a Hungarian Fascist, but not before he managed to sew his last poems were sewn into the lining of his coat. One of those, called “Fragment,” begins with a comment on the state of humanity in 1944:

I lived on this earth in an age

when man fell so low

he killed willingly, for pleasure, without orders.

he believed in false gods. Deluded, he foamed at the mouth.

The Radnoti episode forced Hungarians to confront their own role in the Holocaust. More recently, a Jewish Hungarian fiction writer, Imre Kertesz, won the Nobel Prize for his depictions of life before and during the Holocaust, bringing Hungarian-Jewish writing to the spotlight again.

Jewish literature has also helped preserve Jewish history. The most well-known poet of the Holocaust, and to many the most haunting poet of the 20th century, is Paul Celan, who wrote in German. Celan’s “Death Fugue,” translated here by Stanford professor John Felstiner, chills with its depiction of the Nazi years. It begins:

Although the Holocaust figures prominently in European Jewish literature of mid-century and later, the great tragedy is not the only subject Jewish writers wrote about. For centuries, family, love, faith, emancipation, civil rights, and war were major topics. The terrifying blow of six million dead, millions displaced, and a culture ruined not only reduced the role of Yiddish, but moved the people who became today’s Jewish writers out of Europe and into America and Israel. Today, the marvelous traditions of Jewish writing, from grappling with God to laughing at poverty, have moved into new and welcoming linguistic homes.

A survey of Israeli literature, from Ottoman-era Palestine to today. 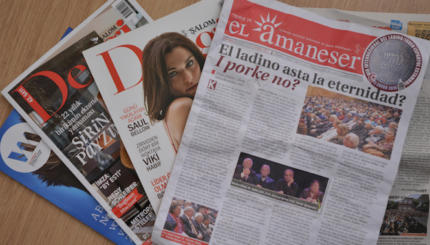 The People of the Book have created a sizable corpus of secular prose and poetry.