This article is excerpted from Entering the High Holy Days. It is reprinted with permission from the Jewish Publication Society of America.

Since the Amidah isthe central prayer of any service, it is important to address the piyyutim added to it for Rosh Hashanah. During the opening blessing of the Amidah, the leader–called the shali’ah tzibur (the representative of the congregation)–recites a reshut, a poem asking permission to interrupt the standard prayer with special additions. Mi‑sod hakhamim (from the teachings of the Sages) asserts that whatever the shali’ah tzibur will insert is based on traditional teachings, midrashim, and talmudic statements.

On the first day of Rosh Hashanah, the leader continues with Yareiti (I am in awe), a piyyut expressing one’s feelings of trepidation at the task of being the shali’ah tzibur on this awesome day. Yareiti was written by the 11th–century poet Yekutiel ben Moses of Speyer and is similar to other, more elaborate piyyutim such as the Hineni, which introduces the Musaf service. These piyyutim stress the inadequacy often felt by the shali’ah tzibur, who recites them to request God’s guidance in the task of leading the prayers and forgiveness for any mistakes that he or she might make in the process. The leader asks God to grant these requests based on the merits of his or her parents and ancestors and of the people he or she represents.

On the second day we recite a different piyyut, Atiti le‑hanenakh (I have come to implore), on the same theme. Written by Simeon bar Isaac of Mainz (whose piyyut Melekh amon is recited earlier in the Shaharit service), Atiti le‑hanenakh allows the shali’ah tzibur to question his or her worth in even more vivid terms and to plead for God’s mercy upon His people.

The weight of responsibility upon the leader of the service is very great. It is for this reason that these heartfelt pleas are uttered by the shali’ah tzibur at the beginning of each repetition of the Amidah. But what is the status of the "representative of the congregation?" In the earliest references to prayer, we find that there was always a leader for the service whose responsibility it was to guide the participants in the liturgy. The official status of shali’ah tzibur, however, ultimately came to apply to the individual who recites the Amidah. Since the Amidah is the central prayer of each service, it is the obligation of each person to recite it; but because of the prohibition by Jewish law during the early centuries of committing prayers to writing, a problem arose for those individuals who did not know the prayer by heart and therefore could not recite it. Because of this problem, some authorities felt that it was sufficient for a person to recite a brief and abbreviated version of the Amidah. The ultimate solution, however, was to have the Amidah recited aloud by one who represented the congregation, the shali’ah, or messenger. Since the prayer of the shali’ah tzibur is thought to represent that of the individual, it is important for the messenger to perform perfectly. As the Mishnah puts it, "If one recites the Amidah and errs, it is a bad omen for him. If he is the ‘representative of the congregation,’ it is a bad omen for those who sent him, since a person’s messenger is considered to be the person himself" (M. Berahot 5.5).

Several additional piyyutim are inserted into the third blessing of the Amidah, the Kedushah. This blessing calls on Israel to imitate the mystic utterances of the angels in their praise of God and was an inspiration for further poetic exegesis:

Ata hu eloheinu (You are our God) is attributed to [Eleazar] Kalir [probably late sixth century, Israel] and is a clear example of his simple, concise poetic style. The piyyut goes through the alphabet, quoting short biblical phrases that describe and praise God. Interestingly enough, this poem is not specific to the New Year and mentions none of the special themes of the Rosh Hashanah liturgy. In fact, it would be equally suitable for any Kedushah.

The following piyyut, Tair ve‑tari’a (rouse Yourself and sound the shofar), was also written by Kalir and is in the form of an acrostic that spells out his name. Although the theme of kingship is prominent here, this piyyut introduces a new idea: this is the moment for God to sound the shofar, the signal for freedom, and to overthrow the enemies of Israel, who destroyed Jerusalem and Judea and exiled the people of Israel. This nationalistic tone is a departure from the older, more basic concepts embodied in the Rosh Hashanah liturgy; it expresses a preoccupation with the status of the Jewish people following the destruction of the Second Temple. For Kalir, a poet living in the Land of Israel, this issue must have been particularly pressing, and he writes about the destruction of Jerusalem and the adversaries whose hands were all powerful, calling upon God to respond: "Rouse Yourself and sound the shofar to destroy all the forces of evil. Be sanctified by those who know how to sound the shofar, Holy One."

On the second day of Rosh Hashanah, the poem U‑vekhen va‑Adonai pakad et Sarah (and the Lord visited Sarah) is recited instead. It was written by Rabbi Simeon of Mainz and is based on the biblical reading for Rosh Hashanah concerning Sarah’s miraculous conception of Isaac (Gen. 21:1). The poet asks that, just as God visited Sarah, so should God visit her descendants for good. Each line contains a biblical quotation and ends with the word kadosh (holy). This piyyut contains allusions to many Rosh Hashanah themes-‑the Book of Life, remembrance, repentance, observance of the covenant ("The Thirteen Attributes of Mercy"), and kingship-‑and also addresses the theme of the previous piyyut, the destruction of Israel by the nations and the call for national restoration and redemption.

The next piyyut, Eten le‑fo’ali tzedek (I will proclaim my master’s justice), is by Rabbi Simeon of Mainz. An alphabetical acrostic composed of many biblical quotations, this poem discusses the justice God will show on the Day of Judgment. The main subject is Rosh Hashanah as Yom Ha­din, the Day of Judgment. God is described here as the perfect and merciful judge who calls upon all to search their hearts.

Like many of the piyyutim, Eten le‑fo’ali tzedek draws on verses from the Book of Job. The story of Job-‑the righteous man who demands justice of God and, after considerable suffering, is finally vindicated–is an appropriate subtext for these days of heavenly judgment. Rabbi Simeon and others who lived in a European society in which the Jew seldom triumphed may have found inspiration in the figure of Job and his ultimate triumph over suffering.

Several piyyutim are centered around the idea of God’s kingship. Adirei ayumah (those mighty and awesome) is recited on the first day of Rosh Hashanah. Like many other piyyutim, this poem forms an alphabetical acrostic. Here, each line concludes with the Hebrew word be‑kol (aloud), which refers to the way the heavenly choirs and the people, Sages, and singers of Israel all give praise to God. The verses are written in sets of three. After the leader recites the first verse, the congregation responds, "The Lord is King;" after the second verse, "The Lord was King;" and after the third, "The Lord will be King." The refrain, repeated after each set of triplets, is, "The Lord is King, the Lord was King, the Lord will be King for ever and ever." The idea expressed in the piyyut that the praise of God is made both on earth and in heaven is the very essence of the Kedushah, which this poem is meant to introduce.

On the second day of Rosh Hashanah it is customary to substitute a different piyyut on the theme of God’s kingship, Melekh elyon (most high king). Written by Rabbi Simeon of Mainz, this piyyut (an alphabetical acrostic) describes and praises God as king.

Another piyyut, Kol shinanei shahak (all the hosts of heaven), recited on the second day, uses the same refrain as the earlier Adirei ayumah, "The Lord is King, the Lord was King, the Lord will be King for ever and ever."

The piyyut that brings this series to a conclusion and leads immediately to the Kedushahisperhaps the most famous of them all: Le‑el orekh din (God who arranges judgment). In this short, classical piyyutby Eleazar Kalir, each verse begins with the letter lamed (used in its sense of "to"), followed by the letters of the alphabet in order. The first part of each line concludes with the word din, judgment, and the second part concludes with be‑yom din, on the day of judgment, that is, Rosh Hashanah.

Although this magnificent poem precedes the Kedushah,it is not thematically connected to it. Rather, it stands alone as an expression of judgment, a major theme of Rosh Hashanah that has not yet been expressed in such blatant terms. The piyyutim up to this point in the service are concerned with God as King; the Gaonic additions focus on the Book of Life. This poem, however, details the process of the trial and the judgment itself and thus adds a solemn note to the liturgy.

Moving from praise to petition to thanksgiving, the Amidah inculcates a sense of connection to God.

What liturgy goes with which holiday, and where you can find it. 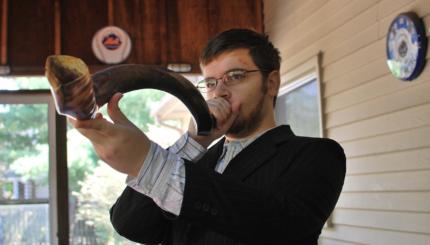 The additional Amidah contains the major themes of the holiday season.