Setting a Date for Yom Hashoah

Excerpted with permission of the author from The Jewish Way: Living the Holidays.

There was a strong tradition that all great tragedies were to be incorporated into the sacred round of Judaism. The great question was: What day should be used?

From the beginning, one of the deep issues in dealing with the Holocaust has been the issue of continuity or discontinuity. Given the totality of the tragedy, was this event something unique or just another in the long list of tribulations, expulsions, disasters that mark Jewish history?

Classically, tradition tried to choose a day connected to the event, preferably an anniversary date such as Passover, Hanukkah, or Tisha B’Av. But what could be the anniversary of the Holocaust? This was no one-time affair; it went on year-round for years. Perhaps a period of the year should be set aside, but when?

A General "Day of Kaddish"

So massive was the scale of the Holocaust killing and so reckless its speed that for most of the dead there was no firm knowledge of the Yahrzeit, the actual date of death. Indeed, for many of the dead there were no survivors of the immediate family to say Kaddish. Finally, in 1948, after some earlier incidents and rulings crystallized the question, the Israeli rabbinate proposed a Yom Kaddish Klali, a general Day of Kaddish to be said for all those for whom there were relatives to say the prayer but no known date of death, and for those for whom there was no relative to say Kaddish but others would say it for them.

Given the high number of victims in the above two categories, the rabbinate also proposed that this general (or communal) Kaddish day be the day of Holocaust commemoration. The day chosen was Asarah B’Tevet, the tenth day of the tenth month of the Hebrew calendar. This is a fast day that traditionally marks the beginning of the siege of Jerusalem which led to the destruction of the Temple.

Why the Tenth of Tevet?

The choice of the tenth of Tevet is worth consideration. Clearly, its selection reflects the idea of incorporating the newest tragedy into the chain of tradition without introducing any halakhic innovation. This decision affirmed that the destruction of the Temple remains the paradigm and acme of Jewish tragedy. But why not incorporate this event into the ninth of Av, as most of the medieval tragedies had been?

The answer is instructive. Of the four days of mourning for the Temple, Tisha B’ Av was the strongest in terms of participation by the Jewish people. Shivah Asar B’Tammuz was far less observed. The third fast day, Tzom Gedaliah, was more neglected yet. Of all the fast days however, the tenth of Tevet was by far the weakest.

Isolated from other holy days, far removed on the calendar from the climactic destruction whose inception it commemorates, the day had dwindled to a marginal existence except in the most traditional circles. This day could benefit most from an injection of ceremony and from connection to a new constituency. In short, the choice of the tenth of Tevet for a Holocaust commemoration day was designed to shore up the dwindling fortunes of the day.

Could the Holocaust "Save" a Minor Fast Day?

In other words, far from coming to grips with the awesome emotional, historical, and theological weight of the Holocaust, the rabbinate still was operating under the sign of the destruction of the Temple. For it, that was the catastrophe of record. Far from considering that the Holocaust was a novum or at least was too massive to be subsumed within existing rubrics, far from confronting the Holocaust as a category-shattering event, the rabbinate sought to incorporate this hurban [destruction] within an existing (minor) halakhic pattern in order to strengthen that pattern.

The rabbinate’s ruling fell totally flat. There was no intrinsic connection between the Holocaust and the chosen day. The lack of fundamental thinking implicit in the decision reflected itself in the absence of any other proposed rituals. The ruling left the Labor left wing, the nonobservant Zionist, and the ghetto fighter groups totally dissatisfied. The proposal never caught on with religious Jews either. The Holocaust could not be used to save the tenth of Tevet. The choice of a memorial day that sought maximum continuity with the past was a nonstarter. That fact is a powerful statement of the theological common sense of the Jewish people.

The final and critical source of a push for commemoration came from a group of ex-ghetto fighters, partisans, members of the underground resistance to the Nazis. During the Holocaust, Zionist youth groups had been particularly active in armed resistance. A number of these fighters had come to Israel and had been absorbed into the Labor establishment.

It is ironic, of course, that this group took the lead in pressing for Holocaust commemoration. In effect, this was deemed the one group that had no apologies to make-because it had fought! These leaders had brought no "shame" on Zionist ideals; they represented no negative model that might "contaminate" Sabras [native-born Israelis].

Under this leadership, the campaign for a memorial authority soon built armed resistance centrally into the theme. The authority was to memorialize Hashoah VeHagevurah, "the Holocaust and the Heroism." For the ghetto fighters, there was only one day worthy of being a memorial anniversary for the Holocaust–April 19, the beginning day of the Warsaw ghetto revolt, the greatest revolt of them all, the uprisings that had held the Nazis at bay for a longer period than the great French army.

Wrangling over the Date of the Warsaw Ghetto Uprising

The Zionists living in Israel objected to the solar calendar date, insisting that the day be marked on the Hebrew lunar calendar. That date was totally objectionable to the Orthodox Jews: It was the fifteenth of Nissan; the Warsaw revolt had broken out on the first night of Passover. The revolt began then because the Nazis, determined to wipe out the ghetto totally, had scheduled their attack on that day.

The Nazis hoped to accomplish two additional objectives in choosing that date for the final assault: one was shattering and trampling the Jewish Passover holiday; the other was completely mopping up in one day, in time to offer the final solution of the Warsaw ghetto problem to Adolf Hitler as a present for his birthday, which was April 20.

In hindsight, one shudders to think about what would have happened had the Orthodox Jews not been opposed and the date of 15 Nissan or the immediate days of Passover following been chosen as the day of commemoration. This would have constituted a decision to permanently incorporate unspoken disdain for the vast majority of the six million dead into the official Holocaust commemoration.

All the arrogance of those outside the Holocaust–those who had never known hunger beyond endurance, terror beyond imagination, family obligations under conditions of grave peril–would have been crystallized in this statement. The Western macho tradition would have won out over some sense of the heroism of mother love, of the courage of educating children in the shadow of death, of the humaneness of thousands of self-help tenant committees, of the quiet dignity of people who (as a Sonderkommando survivor testified) even when standing before the gas chambers never crawled begging for their lives.

As it turned out, the Orthodox Jews would have none of it. Yom Hashoah would necessarily be a day of mourning, sadness and destruction. Passover was a happy day, full of food, family, and assurance of faith. To impose Yom Hashoah on such a day or the festival days following, would utterly negate its character; it would cripple the holiday that was the very heart of Judaism. The Orthodox were ready to accede to a day dedicated totally to the memory of the Holocaust, but they would not allow that day to destroy Passover.

This annual day of remembrance of the victims is observed by Jewish communities worldwide.

The Conservative movement's creation of this scroll is the latest attempt in contemporary Judaism to create a liturgy for Yom Hashoah. 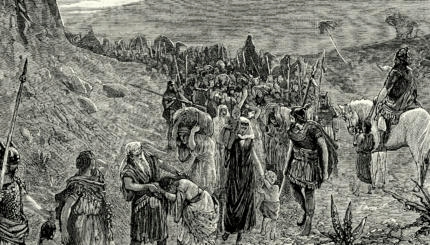