The notion that Orthodox Jews — whether out of an excessive fixation or modesty or simple prudishness — have sex through a hole in a sheet is a widespread misconception, so much so that it was lampooned (and promptly debunked) in a famous scene from “Curb Your Enthusiasm.”

Not only that, but having sex in that manner might itself be a violation of Jewish law. The Talmud records an opinion in Ketubot 48a that there must be a “closeness of flesh” during sex. Some understand this ruling as barring the wearing of any clothing at all during intercourse, including lingerie and the like. But however it’s understood, it would certainly preclude the use of a sheet as a barrier between bodies.

The origins of this myth are sometimes ascribed to tzitzit, the fringed garment worn by many observant Jewish men under their clothing. The Torah commands that any four-cornered garment have ritual fringes attached, but since we don’t commonly wear such garments any longer, the custom emerged of wearing a tallit katan — or “little tallit” — under one’s shirt in order to fulfill this commitment. The sight of such garments — which are rectangular in shape and have a large hole cut in them for the head — may have been mistaken in an earlier era for the mythic sheet with a hole through which Orthodox couples supposedly copulated.

Modesty — or tzniut, in Hebrew — is very much a cherished value in the Orthodox community, with many women covering most of their bodies when out in public. And some ancient teachings do describe modesty, even in marital relations, as a virtuous practice. But the mainstream position is that for the most part, married couples may do as they wish sexually.

“Since a man’s wife is permitted to him, he may act with her in any manner whatsoever,” Maimonides wrote in the Mishneh Torah. “He may have intercourse with her whenever he so desires and kiss any organ of her body he wishes.”

Gazing on the fringe. 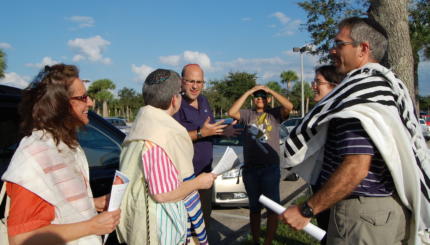 Ask the Expert: Is It OK to Wear a Tallit Outside of Morning Services?

Is the Jewish prayer shawl reserved only for times of prayer?

Wrapping Myself in the Fringes

This was the d’var Torah (discourse) I gave at the Jewish service on Friday night at the Philadelphia Trans-Health Conference, ...