The limited resources of the world we live in affect wide spheres of influence. Resources that are more essential and uncompromising have greater potential to lead to conflict and war. In this week’s Torah portion, Toldot, Isaac faces conflict with the Philistines and the people of Gerar rooted in the age-old struggle surrounding the scarcity of water.

The shepherds of Gerar claim, “The water is ours” (Gen. 26:20) and effectively expel Isaac from the area of the well in contention, forcing him to find a new source of water. Contrary to this behavior, the Philistines simply fill up the wells Isaac used with dirt. That is to say, the desires of the Philistines to hurt Isaac as a result of their jealousy toward him brought them to the place where they preferred to destroy their own ability to draw water from the wells in order to attain a political end.

The issue of water is one of the most primary issues–perhaps even the largest issue–impacting the environment and more directly and immediately influencing mankind’s current quality of living. Today, we are not merely dealing with a potential environmental crisis that threatens tomorrow’s generations–we face environmental questions that have very concrete and specific ramifications in our own world.

Water is the concern that requires us to directly face the undeniable and harsh realization that the world’s natural resources are critically limited, and that all of creation is dependent on the existence of these natural treasures.

Our Torah portion can offer some insight into dealing with Israel’s contemporary water crisis. The first teaching is the necessity to remove natural resources from the realm of destruction in times of conflict and war. The fact that the Philistines deliberately filled up the wells of Isaac in order to expel him from their midst reflects the dangers of war and the need to protect natural resources even in times of serious conflict.

The Torah comes to place limits on our ability to respond harshly during war and forbids us from wantonly destroying fruit-bearing trees as a military tactic (Deut. 20:19). Even in the midst of struggle one must take the “day after” into consideration and understand the profound need for sustainability for both sides of a conflict.

The Torah also describes the process of developing additional water sources. Isaac was forced to abandon the wells of his father, as well as some of his own wells, and he continuously searched for new sources of water (Gen. 26:18-22). We too are bound by the unremitting task of developing supplementary sources of water, and we must avoid relying solely on what exists.

There are many ways to acquire new sources of water. In Israel, one possible solution is to gather rainwater (as opposed to letting it flow to the Mediterranean) in ways that balance the needs of the ecosystem with the human need for more water. Furthermore, we should be investing more effort in preserving an efficient maintenance of the national aqueduct, and at the same time eliminating even more than we already have the waste and negligence which accounts for much lost water.

For example, rather than having an open channel from which water is lost by evaporation, we can use closed tunnels. Additionally, one of the greatest sources for increased water supply is through purification of recycled water–something already done in Israel’s agricultural sector. An increased investment in this technology is critical.

Although the ethics for wise and appropriate water consumption practices are not found in our Torah portion, it is nonetheless included in the general prohibition of wanton destruction (bal tashchit). Due to the direct connection between water and life, the conservation of water becomes a halachic obligation, deriving its source from the laws concerning the mitzvah “You shall not stand idly by while your brothers blood is spilt” (Leviticus 19:16), as well as part of the prohibition of bal tashchit.

In Israel’s private sector, this could translate into a small yet significant conservation of water: turning off the faucet when not in use, watering plants and gardens only at night, using only landscaping that is appropriate for Israel’s dry climate, e.g., no lawns in the desert or golf courses in Israel, water-conserving ways of car washing, requiring efficient and minimized water tanks above toilets, and more.

On an Israeli national and industrial level, the challenge is more complex. First and foremost, there must be a government-led initiative toward proper commercial consumption and water usage, including the establishment of an appropriate price for water that would discourage growth of products that demand exorbitant amounts of water, the management of agricultural consumption and waste of water, and the prudent use of water in the industrial sector.

The water issue in the state of Israel plays out in the international arena in two ways. On one hand, what we see in our Torah portion is also what we see in our newspaper headlines. One of our national existential struggles is our attempt to establish control over the Jordan River’s precious sources of water, which are partially found in enemy states.

Geopolitically, our regional neighbors suffer from similar water problems, and the lack of water in our arid region only adds fuel to the already existing political conflagrations, thus contributing to the fears that water sources will be deliberately destroyed or poisoned, or that our enemies will find an additional pretext to attack the state of Israel.

On the other hand, this could be a very fine hour for the Jewish nation to solve this regional and global concern. Israel’s resourcefulness has already proven to contribute many solutions to water scarcity. Drip irrigation is an Israeli invention that caused a revolution in agriculture, and Israel boasts the largest desalinization plant in the world.

If Israel would continue to invest its intellectual prowess towards this complex issue, it could not only solve its regional issues but also bring well-being to the entire globe.

First, it could minimize the amount of deaths that occur each year from thirst and water contamination. It could also rehabilitate regions in the world that have exhausted their natural resources as a result of ignorant water management. Finally, it could increase the global output of food by unleashing the latent power that nature possesses.

Furthermore, Israel could lead the way in fostering a new culture: One that promotes a sustainable relationship to water consumption and our environment. Israel could model a culture that incorporates future realities in the decisions of today; a culture that consumes a more modest and humble share of the planet’s limited resources; a culture wherein humans understand that they are the crowns of creation and have a responsibility to actively protect and preserve the planet; a culture that does not destroy our planet’s resources out of political interests, and instead cultivates resource in order to future world peace.

From “Scorched Place” to “Pond”

This idyllic culture and the peace that it merits is described in our prophecies concerning the end of days:

Then the lame man will skip like a gazelle and the tongue of the mute will sing glad song. For water will have broken out in the wilderness and streams in the desert. The scorched place will become a pond and the parched place–springs of water. The abode where the jackals rested will become grassland with reeds and bulrushes.(Isaiah 35:6-7)

Although this passage is allegorical, we are not allowed to ignore the literal meaning of the text. The “blossoming desert,” turning Israel into a powerhouse of developing new water sources for herself and for the whole world, is not only a metaphor for the redemption of humankind–it is the redemption itself.

Is God Present in Our Consumption?

We are given God's world and the material within to construct a house for God--one of peace, harmony, and sustainability. 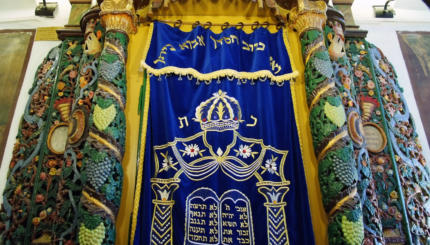 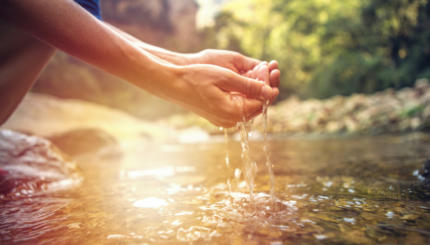