On Passover the Rabbis asked us to play a double role — remembering our slave status by eating the bread of poverty and bitter herbs, yet reiterating the freed status that we achieved on this very night in Egypt. How does one behave in a style befitting a free being?

The Rabbis took their cues from Greco-Roman citizens, a privileged minority whose freedom and dignity were displayed in their participation in elegant symposia [meals that featured intellectual discussion]. Aristocratic dining meant reclining on cushioned couches, sipping excellent wines with hors d’ouevres dipped in appetizing sauces eaten from one’s finest silver and ceramic dishes while conducting a leisurely intellectual exchange of views according to a well-known format set by the host. (The term “school” derives from the Greek word for leisure, “schole“).

On seder night, the Rabbis require this format from even the poorest Jews. Practically speaking, this means that the community tzedakah [charity] fund must provide at least four cups of wine for needy men and women. All must be able to celebrate their freedom with the same basic material comforts, because “all Israel are regarded as children of kings.” For that reason it is customary that someone else pour your wine for you, just as aristocrats are served while reclining.

However, we must note the vigorous dissent from this custom by Rabbi Y. M. Epstein (Poland, 19th century). He feared it would lead to what a contemporary might call blatant sexism or the exploitation of women to pour wine for the men:

“It is haughty and arrogant to order one’s wife to serve him wine. After all, he is no more obligated to drink wine than she. Therefore, we ask that everyone pour for him or herself.”

One of the Four Questions is “Why on seder night must we eat reclining, while on all other nights we may eat either reclining or sitting up?” Clearly the question presupposes a social world in which, as in the Greco-Roman nobility, meals were often taken while the guests reclined on their left arms on couches, leaving their right hand free to dip and taste. At each couch was a small table with individual portions, like today’s seder plate.

However, since the European Middle Ages, it is no longer the way of nobility to recline. In fact, eating while reclining on pillows is the way of the sick. Avi HaEzri led the Ashkenazi tradition in declaring the commandment to recline obsolete and no longer binding (Rabbi Eliezer Ben Joel, 12th-century Germany).

All things considered, we commend the view of Rabbi Y. M. Epstein that everyone should be provided with a pillow precisely because it is an outmoded and outlandish custom. For the point of the seder is to introduce changes into the meal, so the children will be roused to ask “Why is this night different from all other nights?” By the same token it would be ideal for everyone to have his or her own seder plate.

Though most contemporary rabbis sanction the use of three matzot at the seder, the Gaon of Vilna (18th century) insisted that only two matzot be used.

For the two-matzah tradition, matzah is primarily a recollection of poverty. While on all other holidays we eat from two whole loaves, here we eat from one broken matzah and one whole one. [At Yahatz, one matzah is broken in two, with one part set aside or hidden.] The seder re-enacts our common suffering, out of which we generate our solidarity and our moral commitment to the stranger and the deprived. The concern for the outsider breaks into our family banquet symbolically in the form of a broken matzah marring our sense of wholeness.

While even the three-matzah tradition includes one broken matzah, it chiefly emphasizes the seder as a Thanksgiving Dinner. The three matzot recall the minimal thanksgiving offering describedin the Torah (Leviticus 7:12). That offering wasshared within a community of friends and relatives; the hosts praised God who had redeemed them from illness, imprisonment, or danger (Psalm 107:22). On Pesach, families retell how their children were threatened by Pharaoh and how they suffered degradation and injustice in Egypt. While sharing the thanksgiving offering of matzah, they sing Hallel to thank God.

The two-matzah tradition makes this evening resemble a communal “Solidarity-with-the-Poor Box Lunch,” while the three-matzah tradition is reminiscent of a family “Thanksgiving NightBanquet.”

The Mishnah explicitly forbids “completing the Pesach seder with an afikoman” (Pesachim 10:8).But in today’s parlance we always consummate the seder meal with the eating of what we call “the afikoman”–a piece of matzah. How on earth can we explain this? What does the Greek term “afikoman” mean?

To the Talmudist Rav it was clear: “Afikoman” is the Greek custom of going around from house to house on the night of a celebration. This procession (“komon”) held after (“epi”) the formal symposium, involved dropping in at friends’ homes and probably joining them for dessert. However, on seder night in the days of the Temple, one was allowed to eat only with one’s pre-arranged dinner partners (havurah) who had subscribed to the sacrifice of that Pesach lamb in advance. The lamb was offered in their name and no one could join their dinner gathering as an afterthought.

Therefore, on Pesach the Rabbis forbade the Greek practice of a post-symposium procession from group to group, an “afikoman”that might lead people to eat from a Pesach sacrifice not meant for them.

So how, we may ask, did the Greek “epikomon” become today’s matzah? The Talmudists Shmuel and Rabbi Yochanan understood the word “afikoman” to mean “dessert.” They read the Mishnah this way: “It is forbidden to eat afikoman (i.e., dessert) after eating the Pesach lamb” since that is the last and most important item on the menu, and its aftertaste should remain in our mouth all night.

Later the term afikoman was applied to the special dessert that was mandated at the seder ⁠— matzah eaten in lieu of the bite of Pesach lamb that concluded the meal in Temple times.

Reprinted with permission from A Different Night: The Family Participation Haggadah, published by the Shalom Hartman Institute. 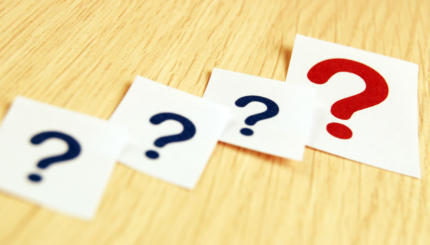 A look at the evolution of the four questions