The author of this piece is a noted choreographer and expert in the history of Israeli artistic dance. Along with Ruth Ziv-Ayal and Rina Schenfeld, she was one of the pioneers of fringe dance in Israel in the late 1970s.

Artistic dance in pre-state Israel was first fashioned by Eastern and Central European pioneers in the early 20th century. Rejecting classical ballet, they turned to Ausdruckstanz (German dance of expression) as a starting point because its concepts of embracing simplicity, breaking tradition, and seeking social involvement fit with their own ideology.

It was through the work of a few key people that artistic dance laid its roots in Israel. Scholars single out Baruch Agadati for presenting the first modern dance recital in the land. His performance, in Neve Tzedek on the outskirts of Tel-Aviv, sought to create an authentic Hebrew dance by combining ethnic material such as Yemenite, Arab, and Hasidic dance.

Among the immigrants arriving in Israel following the Nazis’ rise to power in 1933 were Tille Rössler, who had been a principal teacher at Gret Palucca’s school in Dresden, and dancers Else Dublon, Paula Padani, and Katia Michaeli, all of whom had danced in Mary Wigman’s company.

In 1935, at the peak of her artistic success as a notable dancer in Central Europe, Gertrud Kraus immigrated to Eretz Israel. She went on to found The Folk’s Dance Opera Company, which operated from 1941 to 1947. By the end of the 1940’s the third generation of Israeli dancers started performing including Naomi Aleskovsky, Hilde Kesten, and Hassia Levi-Agron who later founded the faculty of dance at the Jerusalem Academy of Music and Dance.

After World War II broke out, all cultural links to Europe were severed and dancers in the Yishuv entered a period of cultural isolation. This lasted about fifteen years from the beginning of WWII through the War of Independence to the early 1950s. Ironically, Israel, a safe-haven from the devastation of Europe, became one of the only countries on the globe where the German Ausdruckstanz became dominant.

New arrivals to Israel created dances inspired by the landscape of the country as well as by biblical themes–aiming to show a connection of modern and ancient Israel. After 1948, many cultural endeavors were supported by the new state, yet artistic dance was not. Seen as elitist, it took a backseat to more acceptably socialist folkdances.

In the beginning of the 1950s foreign dance groups began touring Israel. For the first time after a decade of isolation the standards of dance in Israel could be compared with that of other countries, and experts soon realized that both modern and classical ballet in Israel were behind the times. American immigrants such as Rina Shaham and Rena Gluck brought awareness of American modern dance. Martha Graham’s historic visit in 1956, funded by the Baroness Bethsabee de Rothschild, inspired changed in Israeli dance.

But important projects were still developing in Israel. Noa Eshkol and Abraham Wachman invented a notation method based on geometry and mathematics that enabled an objective description of potential movements. In 1950, Sara Levi-Tanai created a unique body language in the Inbal Dance Theatre. Tanai dismantled the movement materials of ethnic Yemenite dance and reconstructed them to adjust to a modern Western concept.

In 1964 Bethsabee de Rothschild founded the Batsheva Dance Company. This was a turning point in Israeli dance: the period of Ausdruckstanz was over and American dance became the dominant influence. Rothschild wished to create a professional arena for Israeli dancers, and Martha Graham, whose programs Rothschild had produced for years, became the company’s artistic advisor. Several more dance companies came into existence such as Bat-Dor (1967), the Israeli Ballet (1968), the Kibbutz Contemporary Dance Company (1969), and Koldmama (1978).

Throughout the next decade, all professional dance activities in Israel took place in professional companies, improving technical and teaching standards. Tours by these groups put Israeli dance on the global map. Batsheva and Bat-Dor, the leading companies, competed to bring in important choreographers from around the world. Local choreographic creativity waned.

But by the mid-1970s, modern dance in Israel began to show signs of weariness. The dramatic, thematic approach as well as the movement and artistic concepts became repetitive. At that time, several young female choreographers who had studied in New York brought post-modern influences to Israel. This experimental post-modern dance supplied legitimacy for local dancers and creators to seek new opportunities outside the established companies.

In 1981 Pina Bausch came to Israel from Germany with the Wuppertal Dance Theater and exposed the community to the Tanztheater (dance theatre) style. While experimental dance works had been performed in Israel previously, some of them in the movement-theatre style, Bausch’s visit reinforced that tendency. With roots in Ausdruckstanz, Bausch’s performances awakened the historic connection that Israeli dance has with German dance. American post-modern dance began to seem too conceptual to Israeli creators.

The creative upsurge following Bausch’s visit to Israel was immediate. The following year, Nava Zuckerman founded Tmu-Na Theater, and Oshra Elkayam-Ronen founded the Oshra Elkayam Movement Theater. Like Bausch, they were concerned with gender issues, social norms, and the lack of communication between people.

Beginning in the late 1980s, a large group of experienced Israeli creators and dancers joined both established companies and marginal fringe frameworks. The most prominent independent choreographers were the couple Nir Ben Gal and Liat Dror who proved that it was possible to dance as a couple in modest simplistic productions, but with an original contemporary message. Similarly, the dancers and choreographers Adi Shaal and Noa Wertheim performed as a duo and then created the Vertigo Dance Company in 1992. The company, characterized by its high technical level, dealt with ecological and social issues, among others.

In the last decade the most notable choreographers and companies are Ohad Naharin of the Batsheva Dance Company, Rami Be’er of the Kibbutz Contemporary Dance Company, Yasmeen Godder, Emanuel Gat, and the Inbal Pinto and Avshalom Polak Dance Company, specializing in portraying the world of fantasy.

Major dance festivals, such as the annual Karmiel Dance Festival in the Galilee, also attract large audiences. At this Festival, hall performances as well as mass dances in public parks and in the streets combine folk, ethnic, and artistic dance.

Today, the Suzanne Dellal Centre in Tel Aviv–founded in 1990, under the artistic direction of Yair Vardi–is the primary home to Israeli artistic dance. For the first time, dance has a venue that provides a forum for achievement, and also encourages new projects and gives them exposure to national and international media.

Dance in Israel today is part of the global trend of contemporary dance, in an era that demands advanced technical ability from dancers. It is multicultural, multidisciplinary, and theatrical, dealing with subjects that relate to the reality of Israeli life. 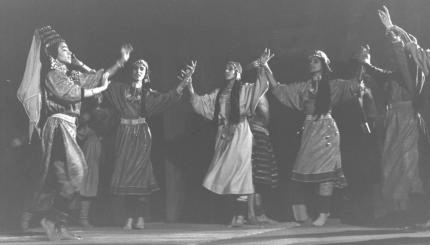 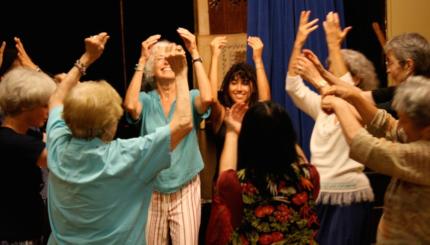