Since the fifth century BCE, Jews have treated the Torah as a unity; the rabbinic tradition employed this principle most obviously by interpreting laws in such a way that they would never contradict each other; or by smoothing over apparent inconsistencies in the Torah’s narratives. In modern times, readers have become particularly sensitive to differences in content and style between one passage in the Torah and another. In the course of the 19th century, scholars developed an elaborate theory holding that the differences in style and content among the various books and passages of the Torah could best be explained historically.

According to this documentary theory, the Torah was compiled and edited — “redacted” — from at least four major sources or documents, each of which originated in a different time and/or place. The earliest source, J, was thought to be produced in the relatively early monarchy in the southern kingdom of Judah; the E source was thought to have been written not long thereafter in the northern kingdom of Israel; the D document, comprising primarily the Book of Deuteronomy, was written toward the end of the Judean monarchy, in the late seventh century B.C.E.; and the P or Priestly source was thought to be a product of the Judean exile (sixth century) or as late as Ezra.

Biblical scholars felt that to understand the Torah properly means to understand it historically. The Torah would have to be read developmentally, layer by literary layer, source by source. The passages of the Torah would be best interpreted by relating them to other passages belonging to the same source and by contrasting them with passages belonging to different sources. In this view, the Torah is not an organic textual unity but rather an assemblage of documents that would have to be disassembled in order to be understood.

Answers to the questions of the Torah’s unity and its sacred, revealed character were given in the 1920s and ’30s by the German Jewish philosophers Martin Buber and Franz Rosenzweig. Buber and Rosenzweig were not traditionalist Jews, but they were committed to the traditional conception of the Torah both as a unity and as sacred. Buber and Rosenzweig were familiar with Biblical criticism’s view of the Torah as a composite work. “My ear, too, distinguishes a variety of voices in the chorus,” wrote Buber (“Abraham the Seer,” On the Bible, 1968, p. 24; first published in 1939). Consider Buber’s metaphor: The different styles and perspectives of the Torah are made to work together, like the musical parts and diverse voices of a chorus. The sources of the Torah, for Buber, did not originate as one, but they have been combined in a single composition.

The Torah, Rosenzweig wrote in an open letter to an Orthodox critic, is a single book; “it is the work of a single mind.” Tradition identifies this mind as Moshe Rabbenu, Moses our Teacher. Buber and Rosenzweig cannot, for historical reasons, agree with the traditional view. However, they, too, regard the mind that unified the Torah as “our teacher” — “his theology is our teaching.”  Bible critics refer to the redactor of the Torah by the initial “R.”  For Buber and Rosenzweig, “R” = Rabbenu, “our teacher.”  And the principle of the Torah as a unity is, for them, a vital key to its understanding.

Buber and Rosenzweig found powerful support for their approach in the way that key terms and phrases (“leading words”) are deployed in critically related passages in the Torah. For example, when the Israelites are to be liberated from their enslavement in Egypt, they are to “borrow” silver, gold, and garments from their neighbors (Exodus 3:22) — they are to “exploit Egypt.”  This moment seems neither inspiring nor even moral. Where is the divine teaching in it? The meaning of this text, show Buber and Rosenzweig, cannot be drawn from one text in isolation.

In the same passage God explains to Moses that the Israelites are not to leave Egypt “empty-handed” (reiqam; verse 21). The word “empty-handed” stands out on account of its prominent use in two other, thematically associated places in the Torah. When the people of Israel’s namesake, Jacob, escaped from the service of his father-in-law Laban the Aramean, he sneaked away, taking with him all the livestock he had earned, in addition to his family. When Laban overtook Jacob on the way and demanded to know why Jacob had fled in stealth, Jacob explained that, had God not been with him, Laban would surely have sent him out “empty-handed” (reiqam; Genesis 31:42).

The implication is, someone who serves you for a period of time must not be released without means. God saw to it that Jacob would not go away “empty-handed,” but the treacherous Laban would have done so. The moral principle is spelled out in the Book of Deuteronomy’s injunction on the release of slaves: when you release a slave after a fixed period of service, “you must not release him (or her) empty-handed” (reiqam; 15:13). You must provide him (or her) with sheep, grain, and wine—just as God did when God redeemed you from servitude in Egypt (verses 14-15)!  The apparent “exploitation” of the Egyptians by the fleeing Israelites is not, then, what it seems. In the larger context of the Torah, it is a divinely arranged accommodation of the released Israelite slaves. Pharaoh would not do the right thing, so God would have to see that it is done.

According to the documentary theory of the Torah’s composition, each of the three passages featuring the term “empty-handed” derives from a different source — Exodus 3 from E, Genesis 31 from J, and Deuteronomy 15 from D. They each belong to a different stage of development or school of thought. For Buber and Rosenzweig — as well as for the traditionalist and for the literary reader of today — the three passages are not to be interpreted individually. They are linked by a single theme: no slave is to be set free without resources. The unity of the passages is the product of R, the redactor-author and teacher, the mind who shaped the materials of the Torah into the form in which it became the sacred text of the Jewish community, the repository of revelation.

The sources of the Torah (which exist only hypothetically) may or may not be revealed; but the final form of the Torah, the work of R, is the complex text in which the Jewish people has heard the voice of God, has found revelation. The Torah as we find it is revealed and sacred, even though its origins may be diverse. Revelation, from Buber and Rosenzweig’s perspective, is the perception that one encounters the voice and personality of God — in this case in the text of the Torah. That encounter assumes the full meaning achieved by relating to the full Torah — and not to only a part of it.

The Torah’s teachings of creation, for example, cannot be drawn from reading the story of Genesis 1:1-2:4 (the P version) alone; nor from reading the account in the Garden of Eden story (Genesis 2-3—J or JE) alone. The Torah’s concept of creation involves the tensions between the cosmological view of the first story and the anthropological view of the second along with our efforts to try to resolve some of the tensions (Rosenzweig). The Torah’s teaching is neither in the story of an orderly and apparently harmonious creation, such as we find in Genesis 1, nor in the story of human corruption that we find in Genesis 2-3. It is in the struggle between the two.

The Torah’s sacred, revealed character is not the result of a single act or event, at Sinai or any other single time or place. It is the result of a process, too complex and clouded in history to be convincingly reconstructed. But what Buber and Rosenzweig have emphasized is that the religious, theological centrality of the Torah does not depend on its historical origins but on its divine source as a textual space in which the encounter between God and humanity can take place.

Buber and Rosenzweig’s Rabbenu is not, historically, Moshe Rabbenu — Moses our Teacher — but the Torah that R produced is Torah min ha-shamayim — divinely given Torah. The holiness of the Torah depends not on the historical processes by which the Torah came to be a text — the “voices in the chorus,” as Buber put it. It depends on our hearing the divine Voice that is met in the integrated Torah. 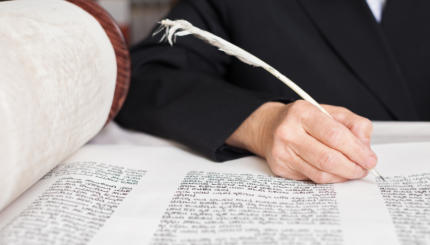 Did God Write the Bible?

Evidence indicates that the Bible, in the form we have it, is a human document, but that does not mean it is not sacred.

Different Perspectives on the Authorship of the Torah

Literary, historical, and theological perspectives on whether the Torah is divine, human, or something in between