Even as a young college student, I’ve had many meaningful experiences that have taught me a lot about life and about myself. However, none have taught me as much as being an inclusion counselor at Capital Camps. I went into the job with some nerves and no prior counseling experience. I came out with a new great friend, Lily, and a plethora of new perspectives.

The first thing that I had to learn as Lily’s counselor was how to eliminate the word “can’t” from my vocabulary. Everyone who knows Lily knows that she won’t take “no” for an answer, so she showed me how it was done. When Lily wanted to slide off the top of a huge lake toy, the question was how, not if. When the cabin got a chance to do a zip line across the lake, the ropes staff made a contraption out of pool noodles so that Lily would stop early enough for them to grab her at the end. When there was no path that Lily’s wheelchair could comfortably roll over in the village area, the camp team brainstormed how to make it work.

My job at camp was not only to make sure Lily had the same amazing experience as every other camper, but it was also to create a culture of “can”. If we set the precedent that “can’t” wasn’t an option, the sports specialists, the lifeguards, the ropes specialists and the village leaders would follow. The determined, problem-solving staff at Capital Camps is like no other; and with their support, there was nothing that Lily could not do.

Over the past two summers I learned that the aforementioned incredible attitude of the Capital Camps staff is devastatingly rare. With this job came lots of love and laughter, but with it also came lots of reality checks and anger. I will never forget the day that we went white water rafting on a camping trip in the summer of 2015. No more than thirty seconds into meeting our rafting guide, it became very clear that it was not going to be a positive experience. Our guide talked to Lily the entire time like she was 5 years old, even after my co-counselor and I explained to him that her disability is exclusively physical.

The anger that ate me up inside as I watched that is a feeling I have only experienced a couple of times, and realizing that Lily has to deal with that regularly overwhelmed me with sadness. The reality checks continued as we went to an amusement park and were told that Lily could not ride the one roller coaster she was looking forward to riding. They continued when the self-proclaimed “completely accessible” adventure resort we went to told us that Lily could not do the zip line course with the rest of the campers.

While these experiences taught me what true protective anger feels like, it also taught me how special the camp environment is. I wish I could snap my fingers and make every person in the world realize how capable people with disabilities are—how society is the thing that disables them. But since I can’t do that, I take comfort in knowing that campers at Capital Camps are growing up with this positive, can-do attitude.

This brings me to one final thing that I learned in my time as Lily’s counselor—to never underestimate 9th and 10th graders. Though my job was physically exhausting, what kept me going the most was seeing Lily’s friends’ kindness and understanding. When I did not awaken when Lily called for us in the middle of the night, her friends got up to fix her positioning or put a sweatshirt on her. When we told them about the condescending raft guide, they lightened the mood by making jokes about it with Lily, something I was way too heated to do in that moment. Lily was laughing hysterically within seconds. Her friends were her biggest advocates and truly some of the best people I have ever met. From here on out, I will never ever undermine the values and incredible qualities of fifteen year-olds.

Something I struggled with a few times this past summer was deciding whether to thank and praise campers for being patient with Lily while she talked, asking her to repeat herself multiple times, for wheeling her in and out of her tent when her counselors were somewhere else, for getting up in the middle of the night to cover her with her blanket. A part of me wanted to praise them to provide positive reinforcement, but another part of me was hesitant because this inclusion was just what we do here at camp—it’s the expectation—so thanking them suggests that we do not expect that behavior all the time. After I struggled for a few days to find this balance, I came to realize that these kids did not need the praise, because Lily is just their friend and they were merely being there for their friend like anyone would. Everything that they do is not about looking good or being generous or doing the right thing; it is simply about being a good friend. I feel immensely lucky to have witnessed such meaningful and authentic friendships.

I could truly go on forever about being Lily’s counselor (and all of my non-camp friends know that, because I do go on forever about it). It’s an experience that changed my life and my attitude for the better, and it gave me more laughs and joy in two months than I normally have in a whole year. No amount of words could ever do it justice. But the thing I would most like people to take away from it is that camp is just a place with regular people. There is nothing inherently different about camp that should prevent what goes on there from being replicated anywhere else. If a can-do attitude of inclusion can be so prominent at camp, there is no reason that it can’t be applied other places. Every single day, Lily and every other person with disabilities deserve the inclusion that they experience at camp. It just starts with a few positive people.

**This blog is the first of a three part series about an inclusion camper, her best friend and her counselor at Capital Camps. Stay-tuned for more next week!

Hannah Stoller is a sophomore at Tulane University studying Public Health and Psychology. She has gone to Capital Camps for nine years, seven as a camper and two as a staff member. Both years on staff Hannah has been a part of the inclusion program. 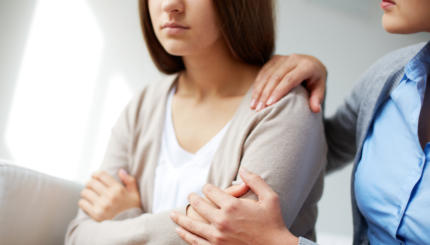 The worst things to say to someone who is grieving.