“The schools would fail through their silence, the Church through its forgiveness, and the home through the denial and silence of the parents. The new generation has to hear what the older generation refuses to tell it.”  ― Simon Wiesenthal

I worked for many years with batterers—men who were adjudicated into a program for domestic violence prevention, men who had beaten, hit, punched, and sometimes killed their wives. They sat and stared at me, denying with the most innocent of eyes the very crimes I had laid out in photos in front of me.

She ran into my fist.

I grabbed her arm and then she ran in circles around me, and that is how she broke her own arm.

She had a soft head, and that is why she died when her head hit the iron railing.

People ask if the men ever changed and my answer remains the same: only if they are able to face their crimes and cruelty. Denial, and the shame these men felt (whether shame at being caught, shame at hurting people they should have loved, or shame at their hidden crimes being brought into the bright sunlight), blocked their change. How do you change if you can’t admit what happened?

Questions of shame and guilt spill to the next generation in families where domestic violence occurs. Are children of abusers doomed to abuse or be abused? Can they inherit a denial of familial guilt, which prevents them from comfort in their own skin and belief in their memories?

Does awareness that your people were killed in vast numbers (for being Jewish, which you are) leave one forever frightened?

What does it do to the frightened, to have that past denied?

What does it do to the children of perpetrators of violence? How does one put together love for a parent even in light of feeling revulsion for the deeds they did or the beliefs they carried?

Should there be a scale of pain and justice here, for these generations now and future? Or should we accept that everyone is the star of their own show, that pain is always relative?

For me, it’s all in the truth. I take no comfort in lies, half-truths, and fairy tales.

I learned from my scientist husband that what is, is. This lesson crystalized for me when, after a lifetime of trying to run from facing issues of fluctuating weight issues, I learned truth could be freeing. Like most women, the size of my dress rules my mood, while at the same time I veil myself from accepting the reality of that number. Pictures where I looked like a whale? Bad camera. Skirts tightening beyond the ability to button? Must be shrinkage at the dry cleaners. Don’t think about those waistbands. Put on an elasticized skirt.

After a lifetime of avoiding the scale, I began weighing myself. And continued to weigh myself every day. And, knowing the truth, I lost weight.

When a nation faces truth, perhaps the psychic weight begins to fall away and collective guilt lifts. Recently a series on German television, Our Mothers, Our Fathers, gripped the nation. According to War History Online:

Reviewers have praised the drama for breaking new ground by showing how the Nazi system reached into every corner of life. Christian Buss, a culture editor for the magazine Spiegel, wrote in a review of the drama that while the question of Germans’ collective guilt had been resolved, the role of individuals remained unclear.

“Who has had the conversation with their own parents and grandparents about the moral failings of their elders?” he wrote. “The history of the Third Reich has been examined down to the level of Hitler’s dog while our own family history is a deep dark crater.”

I want to see this series. The closest I can come to leaving my fear is by understanding how a vast number of people turned to evil—and that they are willing to examine it right. Pretending that nobody in their family ever knew what was going on is far more frightening. If a tiny portion of a nation could truly commit such horrors with nobody knowing but the smallest handful of people—what hope does a frightened child have? If the grandchildren of American slaves are told, “nobody knew it was happening,” why should they believe it couldn’t happen quite easily again?

When I visited the Holocaust Museum in Washington DC the exhibit which most captivated me was a film of survivors talking about their experience—in specific, a man who said that while he was in the camps he thanked God each day in his prayers. I don’t remember the exact words, but the essence was this:

“What are you thanking God for?” he was asked.

“I am thanking God for not making me him,” he said, gesturing towards the guard.

There is pain in participating in evil—especially if one feels bullied into that involvement. Choosing a path of righteousness is always easier in one’s imaginings, but it’s also true that evil flourishes best in silence.

Compassion towards those who feel forced to participate in something as enormously evil as slavery or genocide (whether in Armenia, Rwanda, or Germany) is a kindness that can only be meted out when a perpetrator acknowledges his or her role. A wronged community needs justice and truth to reach reconciliation.

Anti-Semitism, racism, and hierarchies of cultural, racial, and religious power are alive and well. Compassion towards perpetrators of evil (and those who blinded themselves to the evil next door) must be leavened with keeping truth in place. Smothering reality with blankets of kindness is in the end no kindness: not if our goal is preventing future generations of children from living in collective fear.

The Shameful Distinction of Lithuania

I first came across the writings of Dovid Katz while researching what happened to my relatives in Lithuania in the ... 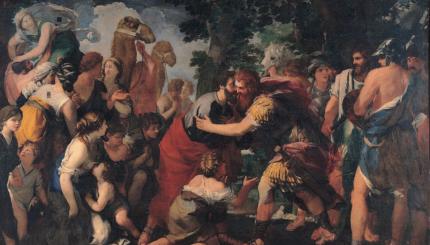 The Path to Reconciliation

How do you keep the past alive without becoming its prisoner?

As a Jewish blogger and editor, I always say that the period leading up to Jewish Book Month is one of ...