Am I Really This Typical?

I often wonder if all roads lead us to the place where we are supposed to be. I don’t mean this to sound quite as philosophical as it might come across; I merely mean that there are so many moments in my life that are meant to be. The Chinese have an idea about this: it is called the red thread. This is the notion that when a child is born an invisible red thread connects the child to their past, present and future. As time passes all that is fated to be will happen.

I have a special place in my heart and soul for this thought. It started when I was 14 and a family who was Jewish asked me to babysit their adorable little girl. April had been adopted from Korea two years earlier and she and her parents were in the process of adopting her sister.  I was babysitting for their family when little sister Jenna arrived and I continued to babysit for them through high school and well into college. The fact that their children were Asian and Jewish was something I noticed in a celebratory way. I loved the combination of the Korean masks that they had in their house and the menorah that sat right by it. It all made sense to me and seemed perfectly “normal.” I remember the girls going to Korean camp and having their bat-mitzvahs and recently have been blessed enough to watch April stand under the chuppah with her new husband.  Asian and Jewish … it just seemed to fit.

Fast forward 20 years and my husband and I are talking about the choices we have in child getting. I have to be honest, for me the decision to adopt was very easy. I had this great example and well, it seemed to me that all the work in trying to have a child biologically was not really worth it if there were children who needed a home and we needed to be parents…. So adoption was the route we took… For my husband and me, this meant going to China in the winter of 2005 and adopting our Madeline Rose Hai Yan Chaya Shifra Nowack.

Fast forward seven years. I consciously chose a place to work that had a good deal of racial diversity for the Jewish community. And let’s be honest, racial diversity and American Jewry do not always go hand in hand. So, I chose to work at Camp JRF because there were other kids who looked like my daughter. There are kids of many races, and many different family styles at Camp JRF so I knew our daughter would fit in at this camp as much as she could in any place where most of the people look nothing like you. I was not prepared for Amy though.

Amy is a stunning 15 year old girl who was adopted from China in the 90s. She is part of the chalutzim, the early families who went to China when things were not as open as they are now. Amy is a smart, easy going girl who never really seemed phased by much at camp. A kid from the Midwest who never got caught up in the drama. So when she walked into my office and closed the door and started to cry I was shocked. She told me how I was the only one who could understand: someone had said something rude about Asians in her presence, not even connecting that she was Asian since, as this person said, “Well I mean you are Jewish…” And she was upset. Not even because her feelings were hurt but because she did not know how to feel. I looked at her and thought: “Oh …. This is that moment… When the red thread brought you to my office…”

We spoke for a while and we tried to solve all the racial issues of the Jewish community. We came up with the idea that nothing was going to be solved for a while. We spoke about how stupid people can be and how confusing things are and how even in the safest of places, like camp, reality is always there.

When Amy went back to her bunk she was better. Nothing was solved, but she knew she had a place to come to when she felt a bit weird about all of the stuff.

I, however, shut the door to my office and cried. I cried for all the kids who look different in one way or another and we as a Jewish community don’t remember that they are part of us. I cried for the moments when someone says something in front of me about others and assumes because I am Jewish I am going to agree with them. I cried because, truth be told, this was exactly what I had feared, that my decision to adopt our daughter and raise her Jewish would somehow leave her on the outside. Then I composed myself and celebrated. How great is it that my daughter can look to older campers and see someone who looks like her. That in her Hebrew school class there are three Asian Jewish girls – not all adopted. That the world gets smaller every day and that there are places all over where she can feel comfortable.

Mostly, I celebrated that the red thread had lead Amy to my office and Maddie to our home and that somehow this puzzle of race and culture and religion was going to be okay.

Camp has been a magical time for all seven of our children. They’ve had a wide range of experiences from ...

There has got to be something between Speedo and slutty.I would love to meet all the girl and tween bathing ... 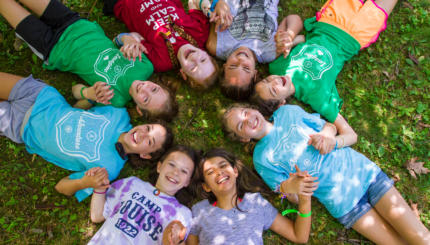