By now, most people have heard of quinoa, the superfood. With plenty of fiber, protein and vitamins it sounds like a super idea. The problem arises when the time comes to actually prepare this somewhat unfamiliar item and poses a special problem during the upcoming holiday of Passover. Jewish people tend to favor foods from their particular part of the Diaspora during these eight days. And really, how many Jews are actually from Bolivia?  But never fear, we Jews are a glorious melting pot! We may have been kicked out of many places but we wind up taking the menus with us.

I have recently traveled around the country to do cooking demonstrations in response to my new book,
The No-Potato Passover
, and I have found that people have a fear and mistrust of this simple Bolivian staple.

But what exactly is quinoa?

Is it a grain? A seed? A vegetable? Help!

Quinoa (pronounced “keen-whah”) is often mistaken for a grain, but it’s actually a seed — one that originated thousands of years ago in the Andes Mountains. Dubbed “the gold of the Incas,” it’s treasured because of it’s nutritive value. Quinoa actually has more protein than any other grain or seed and offers a complete protein, meaning it contains all the essential amino acids our bodies can’t make on their own. It’s also a great source of calcium and is high in lysine, the B vitamins and iron. To top it off, the seed is easy to digest and gluten free! If you are counting carbs or just want to eat healthier quinoa is your new best friend.

Why has this tiny seed brought forth such huge confusion?

For starters, misinformation, or don’t believe the bag!! Typically, the label will state to boil for 15 minutes. In my experience, quinoa is not ready for consumption before 20- 25 minutes of cooking time. Only when the seed “pops” and it is soft, is it ready to be eaten.
But it doesn’t taste like anything.
A-ha! That’s where you come in. The wonder of quinoa is that you can make it taste like anything you want. Think of the biblical mana that fell from heaven.
Do you like savory flavors? Reach for the pepper and garlic. Middle Eastern more your style? How about cumin and safron?  Use different colored vegetables and tangy fruit to add more texture and “zing” and soon you too will be singing the praises of quinoa. It will supply the wonderful canvas to bring out your inner culinary artist.
Mixed Berry Quinoa with Roasted Almonds

1. Cook quinoa according to package.
2. In a separate skillet, sauté onions in canola oil until golden brown.
3. Add chopped mushrooms and sauté for one minute.
4. Add raisins, craisins and almonds, and sauté for another minute.
5. When quinoa is ready, add to pan and mix with other ingredients.
6. Add salt and pepper to taste. 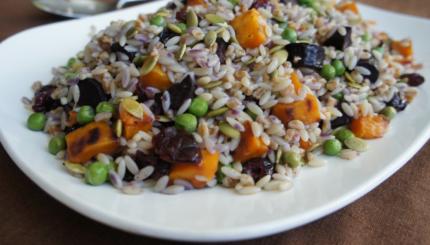 Oh, how I love pasta. Almost all of my favorite comfort foods involve pasta: egg noodles with cottage cheese (a ...